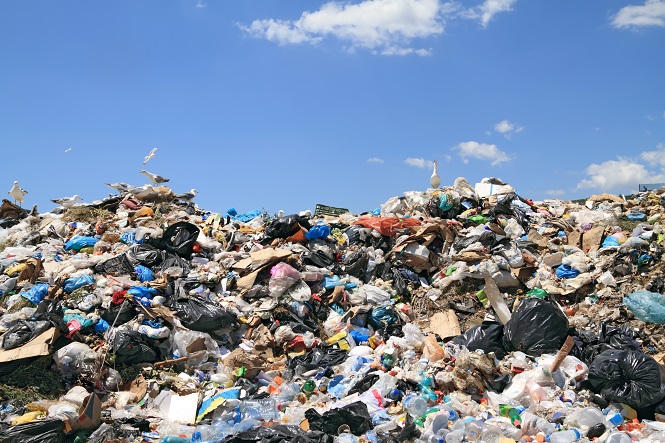 Vik Muniz is not your typical recycling artist. He does indeed use found or unusual items to build representations of people, places and things, but he then photographs the sculpture – which is what ends up in galleries across the globe. Born in Sao Paulo, Brazil, Muniz has achieved international fame for his images that are as unique as the stories they tell. The 2010 documentary Waste Land followed Muniz as he worked with recycling pickers as one of Brazil’s largest landfills.

As a young man in Brazil, Muniz developed an interest in the arts. After being paid to keep quiet about an incident where he was shot in the leg, Muniz flew to New York City to start his creative career. He initially began as a sculptor, with his first solo exhibit occurring in 1988. Around this time, he began experimenting with drawing and photography, the latter of which would become his main focus and claim to fame. He blended sculpture with photography in a way never seen before.

Muniz became known around the world for his style of recreating famous images from pop culture, history and the real world using found objects. He would occasionally use intention mediums – such as chocolate syrup – but also items that may have been inspired by the piece itself. Once the image is recreated, Muniz photographs it – something he has stated is a way for him to create a vantage point for the images he would come up with in his head. Since his meteoric rise to fame, Muniz has had featured exhibits everywhere from New York City to Amsterdam to Tokyo. But his work in the film Waste Land proved to be one of his most ambitious projects yet.

In the 2010 documentary Waste Land, Muniz returns to Brazil in order to collaborate with a group of catadores (waste pickers) who pick recyclable items out of the world’s largest landfill – Jardim Gramacho. The catadores make a living digging through the trash with the hopes of finding valuable recyclables to re-sell. Despite long days in the heat digging among hypodermic needles and soiled diapers, the catadores have high spirits and the arrival of Muniz was more than welcomed. Muniz encouraged the catadores to create self-portraits made out of the trash and recyclables they pick every day. The artist worked alongside them to teach the group about artistic expression and how our sense of self inspires our outlook on life. Once the sculptures were complete, Muniz photographed each piece with the intention of auctioning the works. All of the money raised from the sales of the pictures, along with award money the film itself won, was all donated back to the catadores and their co-operative, the Association of Pickers of Jardmin Gramacho or ACAMJG. The film won numerous prizes and was nominated for an Academy Award. More importantly, it brought attention to the lives of the Brazilian catadores and how these mega-landfills affect the economies of where they are located. Muniz was impressed by the transformation of the participants of the project, as they blossomed from quiet garbage pickers seen and outsiders to stars of the modern art world. This inspiring film is available on Netflix – make sure to check it out!