How can you make your commute a bit more eco-friendly?

Moving can be a pain, as there is so much to think about. You’re plucking yourself from a life where you had routine and order – you knew if you didn’t close your bedroom door just right, your roommate’s cat had the ability to open it and rummage through all of your treasures. If you didn’t leave for work at just the right time, you were bound to be stuck behind a school bus or garbage truck. However, many things can entice you out of your routine. Perhaps you don’t like the size of your room or the self-proclaimed gypsies loitering around next door. But there’s always one thing that can dampen the euphoria of moving. This time: It made your commute longer or more difficult. Commuting is a problem present in the lives of most Americans. The annoying neighbors might be temporary and specific to your current apartment, but likely, commuting will be a present problem no matter which home you’re in. Global Workplace Analytics tells us in 2012 only 2.6 percent of the U.S. employee workforce (3.3 million people, not including the self-employed or unpaid volunteers) considered home their primary place of work. The other 98 percent of us are stuck trying to find podcasts, NPR or morning radio to fill the void. With 98 percent of America commuting, how can we worry about the environment at the same time? I know when I moved, my friends, family and co-workers cringed at me living 50 minutes away from my home, but that was the extent of most people’s concerns. How early would I have to wake up? How much time would I spend in the car? All time-related issues. These are valid concerns and, for a lot of people, the biggest worry when they have a family and kids and a whole life outside of work. But take a step back and think about the bigger picture for a second: If all 98 percent of Americans are only worrying about time, and not fuel-economy or the impact on the environment, the problem is a bit larger than we think. Since I’ve moved, I’ve decided to re-think my own commute. A laborious task in rural Connecticut. Sure, I live 50-minutes away, but do I have to be filling up my SUV and guzzling gas all week long? I certainly didn’t think so. So, I identified a few options that allow for those of us with commutes to go a little bit lighter on Mother Nature.

This is the easiest and most low-tech form of commuting. You don’t need much at all. You can walk (or run for those of you ambitious readers) in sun, rain, sleet or snow, and you won’t have to worry about crashing your car or getting a ticket. You’ll have zero impact on Mother Nature as it relates to commuting. No gas emissions, and best of all, you’ll be healthier for walking every day. In fact, according to Albion University, “Increasing your daily walking is directly related to your mental and physical well-being.”

Cycling is very similar in terms of health benefits to walking, although, it is a bit easier depending on your commute. It does require owning a bicycle, but in terms of environmental impact, provided you’re not going out and buying a brand new bike, it’s about the same as walking.

Public transportation is a great way to commute. In Connecticut, it is not as common outside of major cities, but I have used it in almost every single one of the larger cities in the state for various reasons outside of my daily commute. Trains, buses, ferries – you name it. In my case, it is very difficult to use daily. Connecticut isn’t quite populated enough to allow for public transportation from my part of the state to my job. There are so few people making the same commute that it isn’t effective to get a bus system in place just for this route. However, if you have the opportunity, it is generally more cost effective and environmentally sound compared to driving your own vehicle every day.

This is what I landed on for my commute most of the time. The University of Connecticut was awesome enough to provide a venue for people to look for carpools on its carpool website. There are plenty of other ride share programs in various areas around the world, and I would thoroughly recommend using them. They can be tricky to ensure everyone’s schedules line-up, but if you can use them, it is well worth it. According to the EPA, Leaving your car at home just two days a week can reduce your greenhouse gas emissions by an average of two tons per year.

5. Use a vehicle with better fuel economy

I have selected a sort of hybrid approach to commuting, and so this is my other choice, along with carpooling. I didn’t choose a Prius or a Smart car, though. Instead, I selected a 2006 Harley Sportster XL 1200 Low. I have read various reviews and, though, Harley claims this vehicle gets 52 mpg on the highway, on a recent road trip I was getting around 57-59 mpg, with other reviews have confirming this. 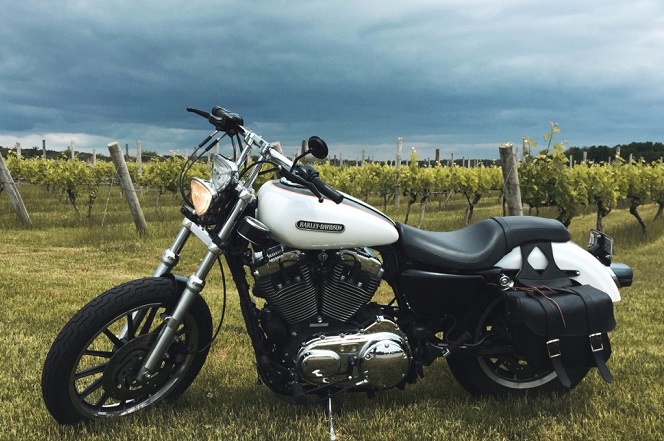 6. Talk to your boss about telecommuting

The last option I have to recommend is to talk to your boss about telecommuting. In 2015, with flexible work schedules and everything else changing, I don’t think it hurts to bring this topic up with your boss. This is of course under the assumption you’re on good terms with your boss and you are working a job that allows this sort of flexibility. You can’t telecommute and cut someone’s hair (we’re still a few years and technological advances away from that day) but you can definitely write articles for a recycling blog from just about anywhere there is internet.