Everything You Ever Wanted to Know About Bees

Colony Collapse Disorder is plaguing bee populations around the world. What is it? What can you do to help our honey-making friends? 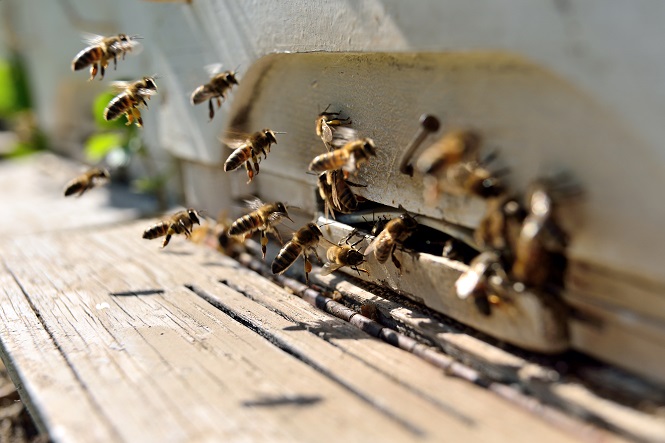 Unless you’ve been living under a rock, you’ve probably heard about the collapsing bee population in passing. Just mentioning bees goes hand-in-hand with the bee population’s crisis mode, thanks to what has been dubbed Colony Collapse Disorder (CCD). Whole bee populations will die off unexpectedly, and CCD will leave a colony with no adult bees or dead bees with a living queen. Time reported beekeepers are seeing an increased bee mortality rate of about 18 percent, attributed to CCD. That percentage doesn’t seem like much, but that equates to 10 million beehives worth $200 each between 2006 and 2013. That’s $2 billion lost and countless bees that aren’t pollinating food crops. According to the United State Department of Agriculture, bee pollination accounts for over $15 billion in crop value annually. That’s one mouthful in three that benefits from bees. So what’s the deal? Why the loss in the all-important bees?

QUARTZ aptly referred to the condition as “beemageddon.” What better name for a mass bee die-off under mysterious circumstances? Although, it’s not to make light of the issue. The most disturbing thing about the condition is no one quite knows what is causing CCD, even though the issue started being reported around 2006, almost a decade ago. Everything from pesticides to nutrition has been kicked around as a possible cause. QUARTZ also listed a study in 2013 published at PLoS ONE that attributes the die-off to increased levels of fungicide, which appears to make bees more susceptible to an illness called Nosema ceranae, a gut parasite. In addition, according the study, “We detected 35 different pesticides in the sampled pollen, and found high fungicide loads. The insecticides esfenvalerate and phosmet were at a concentration higher than their median lethal dose in at least one pollen sample.” CBS reported on a study out of Harvard, which linked CCD to pesticides. The study said the pesticides can have catastrophic neurological effects on memory, behavior and cognition. Chemically treated plants will release pollen into the air and infect the bees. The study was conducted by feeding 12 out of 18 hives imidacloprid or clothiandin pesticicdes. By spring, half of the 12 hives were gone. Yet the study is under scrutiny, since those deaths could be attributed to normal winter bee die-offs, which meant fewer bees were eating more of the pesticides. Meanwhile, over in the U.K., the Bumblebee Conservation Trust attributes the decline to fewer bee-food-producing wildflowers. It states the U.K. has lost 97 percent of flowery grassland in favor of food-producing farmland. Two bumblebee species have even become extinct in the U.K.: Cullem’s bumblebee around 1941 and the short-haired bumblebee around 1988. Although the United States Department of Agriculture lists that there has been no definitive, scientific cause for CCD identified yet, it does list possible causes to be looked into, like pathogens, parasites, migratory stress as fewer bees have to be transported around the country, poor nutrition thanks to overcrowding and stressors like a shortage of quality pollen. In short, it’s still very much a mystery. So what can we do about it while the verdict is out?

Help for the bees

Whatever the cause, all early indicators point to the need for sustainable, nonchemical-heavy models of farming. If you prefer to go the political rout, you can sign a petition at sos-bees.org. The Xerces Society covers bee populations and conservation as well. On an individual level, you can make some key lifestyle choices to keep the bees safe. For instance, avoid spraying pesticides whenever possible, especially in the middle of the day when bees are out and about. You can even make bee-conscious planting choices. The 104 Homestead has a great resource on making your own backyard bee meadow. The site contains a list of plants bees love, such as asters, currant, elder, huckleberry, rhododendron, sage, sunflower, wild lilac and willow, to name a few of the more common plants. The site also recommends planting the widest variety of colors, types and shapes of flowers so you can attract all types of bees. Also remember to plant flowers that bloom throughout the year so there is always something to pollinate. If you’re really adventurous, you could start your own beehive. But make sure you know what you’re getting into. There’s a great resource at Countryfarm Lifestyles. The site even covers urban beekeeping, which has become a fascinating hobby in many cities. Popular Mechanics details how beekeeping has taken off even in New York City. There’s a beekeeping Meetup group and classes are offered via a beekeeping co-op. The article also shows pictures of some inventive rooftop and small-lot beehives and gardens. Beekeeping may look intimidating, but if you use the proper techniques and safety measures (such as the protective clothing and bee veil), it can be a viable hobby in any area. You’ll do a little bit to help grow bee populations and have a sustainable source of fresh honey.