How to Recycle E-cigarettes

E-cigarettes may still be relatively new, but they’re gaining popularity fast. But what do you do when you’re done with them? 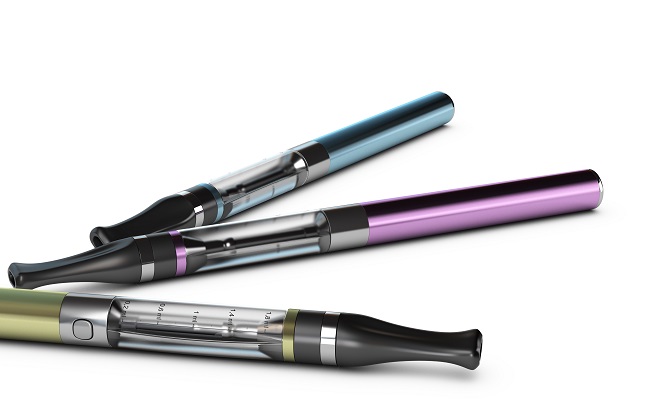 The growth of e-cigarettes is astounding. According to the website Statistic Brain Research Institute, e-cigarette sales jumped from $20 million in 2008 to $1.7 billion in 2014. Two-and-a-half million people identify themselves as e-cigarette smokers, and nearly 3 percent of adults have tried them at least once. As the e-cigarette industry has grown, so has the e-cigarette recycling industry. There are several companies that will take back cartridges, batteries and even the cigarettes themselves. Each program is different, so it is important to read the fine print as you begin exploring them. Read on for more details on the basics of e-cigarette recycling.

What is an e-cigarette?

An e-cigarette (also known as a hookah pen or e-hookah) is an electronic device used for smoking. The cigarettes themselves are typically made of plastic. Each e-cigarette contains a battery, which lights an atomizer and heats a liquid until it turns into a vapor. That vapor is inhaled through the cigarette (for that reason, smoking e-cigarettes is often referred to as “vaping”). There are two ways to get the liquid into the e-cigarette. The user can drip a product called an e-liquid straight onto the coils. The cigarette can also deliver the e-liquid through a cartridge that is installed in the device. E-liquid is made with propylene glycol, vegetable glycerin or a combination of both. Flavorings are added to the e-liquid to make it taste better than typical cigarettes. The e-liquid typically contains nicotine, although some types contain only the flavoring. The jury is still out on whether smoking nicotine-packed e-cigarettes is any better than smoking conventional cigarettes. They contain fewer harmful chemicals, and they deliver a lower dose of nicotine. Some people believe they are a good way for people who are trying to quit smoking to wean themselves from their nicotine addiction (according to Statistic Brain, 31 percent of people who used e-cigarettes quit six months after starting). However, e-cigarettes with nicotine are still addictive, and they still give off substances like formaldehyde and acetaldehyde. It is easier to receive enough nicotine to make you sick or kill you by drinking or spilling the liquid on yourself. Because they taste better than cigarettes, e-cigarettes can seem more appealing to young people. According to the information on Statistic Brain Research Institute’s website, 10 percent of high school students report they have tried an e-cigarette.

The environmental benefits of e-cigarettes?

Here is an interesting twist on the debate: Some e-cigarette companies report that their products are better for the planet. Cigarette butts are a big environmental problem. As we outlined in an article on how to recycle cigarette ash and waste, cigarette butts represent the majority of the litter thrown in city streets. Those butts often end up getting washed into rivers and lakes, where animals can mistake them for food and ingest them. Those that do not get eaten will not biodegrade, so they simply pile up on shorelines or at the bottom of waterways. While some e-cigarettes are meant for a single use, others can be reused over and over again. If you recycle them when you are finished with them, there is virtually no waste.

How to recycle e-cigarettes

Recycling the cartridges and batteries from e-cigarettes is relatively easy. Recycling the cigarettes and e-liquid bottles is harder but still possible depending on what brand you buy. NJOY is the only e-cigarette company we could find that accepts the actual cigarette back. To return you NJOY cigarettes, save up eight of them, then pack them in a box and mail them back to the company. The cigarettes need to be accompanied by a simple form you can download from their website. As a thank you, NJOY will send you one free e-cigarette. Mistic Electronic Cigarettes in North Carolina offers a program to recycle e-cigarette batteries and cartridges. People who purchase its cartridges and batteries can return them to the company for recycling. As an incentive, Mistic will give you your choice of a free five-cartridge pack or a basic starter kit. You have to save 50 cartridges before you return them to Mistic. They recommend putting in any batteries for recycling at the same time. Items can be packed in a box and shipping through the normal mail. Green Smoke also offers a recycling program. It will take any brand of cartridges as well as batteries. The downside to its program is that you have to save 80 cartridges before sending them in. The good thing is that Green Smoke will pay the cost of shipping. Some companies accept e-liquid containers, although those seem to be few and far between. The brand 7’s will take them back, so find out more about its program if you buy the company’s products. E-cigarettes are new enough that no government agencies seem to be weighing in on how to recycle things like plastic or e-liquid containers. It is worth checking with your local recycling agency if you are thinking about recycling your (empty and clean) bottles through your curbside recycling program. To find out if your e-cigarette manufacturer has a recycling program, check its website or do a quick Google search. If it does not have one yet, send your cartridges and batteries to a company that will accept any brand. Then, email your brand and encourage them to find a way to help consumers recycle e-cigarettes. If so many other companies have found a way to make this a reality, all of them should be able to do it.