Keep Calm and Breathe, At Least Until You Can’t Anymore

Think the air you’re breathing is free and clear? Well, prepared to be scared. Read on …. 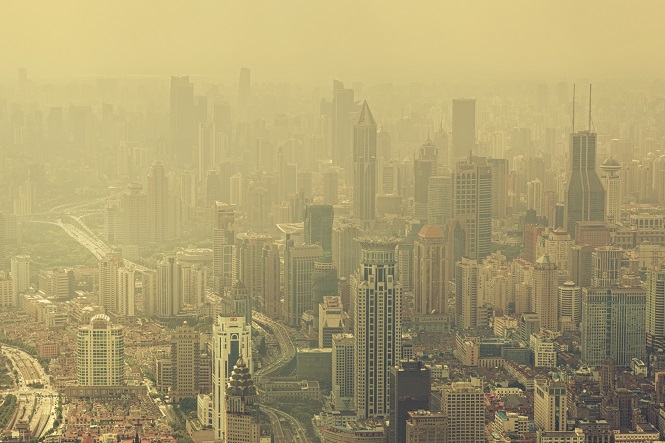 Wow, today was a beautiful day.
It’s a balmy 82 degrees out, and the slight breeze that’s kicked up as the sun sets carries with it the sweet scent of late-spring wildflowers. That’s my favorite part about living smack in the middle of the country. That, and the lack of sharks.
And I know diehard city dwellers will rave about the art and the culture and the fact that everything is at your fingertips, but they can’t step out onto their back porch and taste the freshness of the air. And for those who’ve never experienced it, trust me when I say, there’s very little that compares.
And the funny thing is, I know the air I’m breathing is nothing like it used to be. In fact, where I sit right now, in southwest Missouri, used to be the western edge of a longleaf pine forest that literally covered everything east of the Mississippi, and a little beyond.
Imagine how that must have smelled.
Certainly, nothing like it does now. Mixed in with my wildflowers – so much a part of the background I only notice when I think about it – are the subtle scents of man. Car exhaust, fertilizer, the sticky tang of hot asphalt and, when the wind is right, the sewage treatment plant across town.
Over the course of our lives, we’ve all come to accept those background scents. We grew up with them, and we don’t know anything else, so we don’t think about them. But here’s the thing about smells, they’re not just smells. We smell things because tiny particles strike our olfactory sensory neurons and send a message to our brain telling us someone is cooking pork chops. But for every pork particle that hits those special little neurons or gets snagged in your unsightly nose hairs, another one goes directly into your lungs.
That doesn’t seem so bad when we’re talking about aerosol cake pieces. It gets a little more serious when we shift the subject to trash fires.

What’s happening to our air quality?

It’s hard to imagine anything bigger than the sky. After all, it’s everywhere you look. And it’s always been there to provide you with air to breathe and rain to hide from inside your house. And we’ve always taken for granted that our supply of fresh air is even more limitless than our water.
But it turns out we’re human. And for all our ingenuity, for all our drive to make things better for ourselves and our kids, we don’t always think things out too well. We tend to do what’s easiest and not really bother with the consequences.
So when we, as a species, collectively decided it was time to industrially revolutionize our society, we sorta just did what was easiest. We used fossil fuels because they were cheap, they burned and they gave us energy. When our newfound technology required we move around faster, we adapted those fossil fuels to burn in our new energy-requiring transport devices.
And for over 200 years, we’ve been burning those fossil fuels at breakneck pace, belching out smoke into our limitless sky. Factories, cars, planes, garbage incinerators and barbecue grills have spent two centuries stinking up our atmosphere.
And if it just smelled bad, maybe it wouldn’t be a problem. It’d be annoying, sure, but it wouldn’t really hurt anything.
But it doesn’t just smell bad. And it does hurt things.

How bad has our air gotten?

Short answer? Bad.
The 750-mile-long answer is the smog cloud that stretches from Shanghai to Beijing – a haze of pollution thick enough to be seen from space.
Smog is the most easily visible of the major air pollutants. It’s mostly made up of ground-level ozone, produced when sunlight reacts with nitrous oxides and certain organic compounds in the air. Smog on its own is nasty stuff. It decreases respiratory function, and can cause permanent lung damage even at low levels, if you’re exposed it for long enough. It harms animals and literally blocks out the sun, which keeps plants from growing to their full potential.
But smog is the nice kid that got adopted into the Manson family of pollutants. It’s trying its best to fit in, but it’ll never be as bad as the rest of them.
Nitrous oxide doesn’t mess around. It goes straight for the children, causing respiratory infections and inflammation. Along with its twin brother, sulfur dioxide, it’s also responsible for the 1990s’ favorite eco-buzzword, acid rain. Particulate matter (tiny particles of junk in the air) will straight give you cancer. Lead will systematically shut down your organs, and carbon monoxide takes away your oxygen and holds you gently while you suffocate.
The people of eastern China face these dangers every single time they inhale. Every yellow, orange, red or purple flag on that map I linked above represents an elevated risk from just breathing the air. At the time of this writing, China is mostly obscured by red and purple flags, with one (probably malfunctioning) green one in Wuhan, and a few more on the southern coast. Japan looks like it’s on fire.
In 2012, 3.7 million people died from ambient air pollution, and that number’s only going to climb if our air quality doesn’t get better.
And so, if you don’t think this just a problem in Asia, look again at that map. The only continent that doesn’t have any yellow-or-worse flags is Antarctica. And I’d bet dollars to penguin food that’s only because there aren’t any sensors down there.

How can we make our air quality better?

The best way to cut down on air pollution is to cut down on fossil fuel combustion. Drive less, walk or bike more. Convert to solar or wind power where you can. Consume less, recycle more.
Do any of these suggestions sound familiar? I hope so, because they’re basically the mantra of this blog and every blog like it. It’s all connected. We use fossil fuels to produce and pollute the air in the process.
We pollute the air and we get sick and our plants don’t grow. Our plants don’t grow and we can’t feed ourselves. We can’t feed ourselves, so we have to find easier ways to produce. So we use fossil fuels.
Here in America, we’ve got a head start on breaking the cycle. We realized (relatively) early that our air was gonna get bad, so we started putting legislation in place in the ’50s. We’re by no means out of the woods, but we’re doing better than some.
We’ve still got a lot of work ahead of us to break the cycle. It’s work we have to do, though, because if we don’t we’ll forget what flowers smell like altogether.