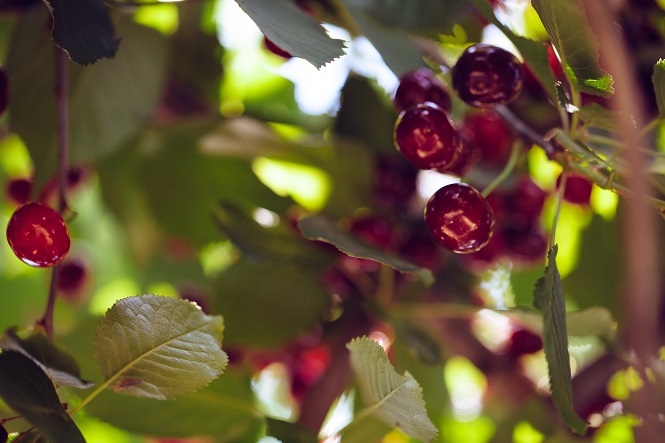 If the Tree of 40 Fruit looks like a work of art, that’s because it is. Yes, it bears 40 types of fruit, but it wasn’t made by a biologist in a lab. It was created by Syracuse University Art Professor Sam Van Aken, and looks like painted plant life out of a fantasy landscape. When in bloom, competing shades of pink, white and crimson blossoms all grow out of the same trunk. And, of course, later in the summer you can get 40 types of fruit like plums, apricots, nectarines, peaches and even almonds. Van Aken made this wonder by grafting certain types of fruit plants to a base tree. He keeps track of when the plants blossom in relation to each other. By following a specific timeline, he can graft certain plants on at certain times and sculpt how the tree will blossom. The fruit is all stone fruit, because as Van Aken said, those types of fruit have more diversity and are more compatible with each other. While Van Aken’s career has been focused on art, he does have a background in agriculture, which shows itself in his work having always been “inspired by nature and our relationship to nature.” Van Aken first became interested in grafting plants during his 2008 project when he grafted vegetables together to create odd new plants for his Eden exhibition. Right after that, he started his work with fruit trees. The inspiration for the project is as free-flowing as the project itself. Van Aken told epicurious, “At the time this project began I was doing a series of radio hoaxes where I hijacked commercial radio station frequencies and played my own commercials and songs. In addition to becoming acquainted with FCC regulations I also discovered that the term ‘hoax’ comes from ‘hocus pocus,’ which in turn comes from the Latin ‘hoc est enim corpus miem,’ meaning ‘this is my body’ and it’s what the Catholic priest says over the bread during [the] Eucharist, transforming it into the body of Christ. This process is known as transubstantiation and [it] led me to wonder how I could transubstantiate a thing. How could the appearance of a thing remain the same while the reality changed? And so, I transubstantiated a fruit tree.” Even the number 40 is significant to Van Aken. He stated that 40 has a strong recurrence in religion and represents a “number beyond counting.” Van Aken said his ultimate goal with the project is to change the way we see the everyday. When the tree blossoms in competing ways and different fruit are hanging from one tree, he said, it alters how we perceive the world in general. And that it does. It really gets one thinking in terms of sustainability. How cool would it be to have your own fruit tree that acts like a single trip to the fruit section of the grocery store? It’d be the ultimate in local produce, a backyard farmer’s market, allthough Van Aken said it takes about five years to develop each tree and graft 40 different fruit plants to it. After a tree is planted, Van Aken comes and prunes the tree in the spring and grafts in late summer. This must be done for three years until the tree is established. So this plant is hardly a single seed you can go out back and plant. Still, the people who have the fruit trees at their homes have access to decent amounts of fruit over a spaced out time, from July through October. It’s a canner’s dream. Plus, it beats having a fruit tree that inundates you with one type of fruit all at once, to the point where you need to give your fruit away. Van Aken also commented on the surprising nature of the fruit itself: “For people who aren’t aware of farming and growing, the diversity of these varieties and their characteristic tastes are surprising and they ultimately begin to question why there are only a few types of plums, one type of apricot and a handful of peach varieties at their local market.” In the future, Van Aken would like to plant these throughout the country and eventually make small orchards of these trees in urban settings.