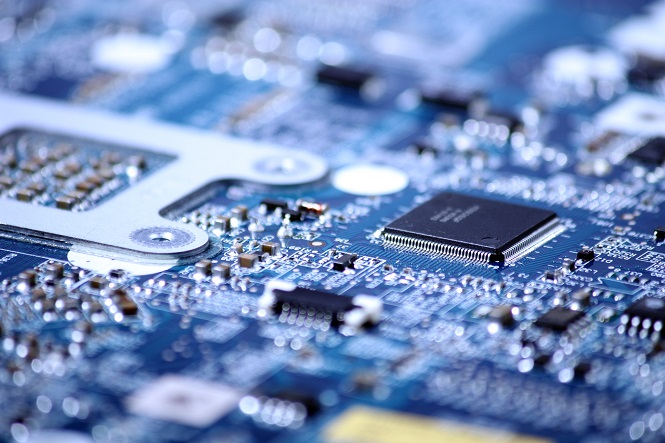 A paper from Nature Communications cited that cell phones are used for less then 18 months on average, and computers are used for less than three years. That’s a lot of e-waste we’ll need to either recycle or break down. Enter wood-based, biodegradable electronics, which would mean a reduction in the extensive scrapping process to find the precious metals in e-waste and fewer products that would sit in the landfill forever. From microchips to batteries, wood-based electronics are a rising answer to the e-waste crisis.

Despite its decidedly unglamorous name, CNF, or cellulose nanofibrillated fiber, is what makes up the new wave of biodegradable, wood-based electronics. As the name suggests, it’s made from cellulose, which is the building block of cell walls in most green plants. CNF is made by breaking down wood until pulp fibers are left, just like the paper-making process, but these fibers are reduced to the size of nanometers. When broken down, those small, pulp fibers have the properties of plastic and could be used in our highly trend-based, replaceable cell phones. Testing this material involved looking at how biodegradable the material is by fungus. The answer: very. Researchers applied the microorganism P. placenta to an epoxy-coated CNF substrate (the epoxy makes the CNF resistant to moisture). The substrate was covered in the fungus fully within 60 days. According to the study, “Once degraded, the leftover electronics portion… can be collected to be further decomposed and recycled.”

Changing the hardest electrical component to recycle: the microchip

Microchips have always been a bit of a menace. The base material in smartphone and tablet chips is made out of gallium arsenide, which contains arsenic. Fun. CNF would replace that. Further, the researchers commented on just how wasteful current microchips are: “In a typical semiconductor electronic chip, the active region comprises the top thin layer and is only a small portion of the chip, whereas the bottom substrate that holds the chip consists of more than 99 percent of the semiconductor materials. In microwave chips for wireless functions, besides the waste of the bottom substrate, only a tiny fraction of the lateral chip area is used for the required active transistors/diodes with the rest being used only for carrying other non-active components.” This new chip just uses the lowest amount of silicone needed for the chip to function, coming out to just a micrometer, with trace amounts of other metals that would be broken down by fungus.

Other uses for wood pulp in electronics

The technology isn’t just limited to microchips, either. Scientists from the KTH Royal Institute of Technology in Sweden and Stanford University have made high-capacity batteries from wood pulp. The battery material is described as “elastic” and “foam-like,” and can take high degrees of shock. The real power of the material, though, is that it can allow 3-dimensional power storage, far more than a conventional battery. Max Hamedi from KTH told The Times of India, “Three-dimensional, porous materials have been regarded as an obstacle to building electrodes. But we have proven that this is not a problem. In fact, this type of structure and material architecture allows flexibility and freedom in the design of batteries.” The material the battery is made out of starts with the same process as the wood microchip. Tree fibers are broken down to the micro scale to produce nanocellulose. Then that is dissolved, frozen and then freeze-dried to get rid of the moisture, and then the molecules are stabilized. The finished product is a compressed aerogel that could spread over a football field, if laid out flat. A paper from North Carolina State University also does a wonderful job of outlining the potential for CNF. Already, the paper stated, the material has been used in barrier coatings, food and transparent flexible films. It also states just how easily modified, available, renewable and biodegradable CNF is. In addition to covering aerogel, the paper stated a promising avenue for CNF involves using it to make nanocomposites for building car parts and other mechanical components. The paper mentioned that natural fibers are a better option to glass fiber in that they have lower cost, are lighter, can biodegrade and create less abrasion on equipment. Other uses involve making CNF packaging films, creating optically transparent composites, using it in biosensors for immobilizing bioactive molecules like antibodies, using it in pharmaceuticals to stabilize medications and even using CNF and silver nanoparticles for the antibacterial properties they possess together, just to name a few uses. Think about it: all that from wood.

OK, so when can we get our wood techno-wonders?

Unfortunately, the newer uses like the microchip are still a ways off from being adopted. One of the researchers for the microchip, Zhenqiang Ma, told CNBC that he doubts microchip manufacturers will be willing to adopt the new technology soon. The upfront costs to change the current mode of operation are just too high. Ma predicts change may come from government incentives to adopt the technology, like solar panels or electric cars. In the meantime, the group has already filed for patents for applying the technology to wearable tech, due to CNF’s transparent and flexible properties. Further, the paper from North Carolina State University mentioned that using CNF in component manufacturing, as of 2013, still had substantial testing to undergo in terms of flame resistance, moisture resistance, durability and recyclability. Still, it looks like a promising technology to keep an eye on.