How to Recycle Keys

If you have a handful of old keys living in a drawer in your home, you’re not alone. But you can recycle them! 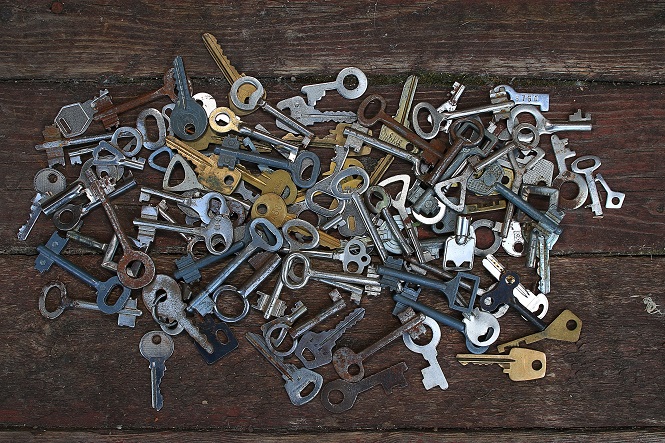 Anyone who has moved house, gotten a new car or changed jobs (so basically everyone) probably has a couple unwanted keys at home. Keys are one of those things that tend to pile up, because most people are uncertain what to do with them when they are ready to recycle them. Since keys are made of metal, a highly recyclable item, they are easy to dispose of in an eco-friendly manner. Usually the challenge is mustering the energy to take a trip to the nearest recycling center to dispose of a handful (literally) of items. Save up your keys until the next time you plan a big trip to your recycling center, or drop them off at an organization that sells reusable items to crafters. You can also donate keys to charities that help families and people with disabilities. If you are lucky, you may even be able to sell your old keys.

What are keys made of?

The earliest keys (and locking mechanisms) were found in Egypt and were made of wood. That had several disadvantages, most notably that they were easy to break. The Romans were the first to make keys from metal, and that innovation proved much more successful. Early keys were made of brass and iron and resembled a modern-day skeleton key, with a round body and a small, single “tooth” that worked the lock. Many homes and businesses in the United Kingdom still use skeleton keys. Their main drawback is that they are difficult and expensive to replicate. Flat keys were first invented by the father-son team of Linus Yale Sr. and Linus Yale Jr. in the 1800s. They had the advantage of being easy to copy, and became very popular in most parts of the world. Modern flat keys can be made of nickel silver, brass or aluminum. In the 1990s car manufacturers began introducing keys with a small chip or transponder in them. These keys were intended to help stop thefts by preventing the car from turning on if the wrong key was used. Chip keys have small bits of plastic in them – even more if they come with a remote control that unlocks the car or automatically opens doors.

How to recycle keys

Since most curbside recycling programs do not accept scrap metal, you will not be able to put your keys in your bin. However, every recycling center should have a metal recycling bin, so you can place old keys in there. Keys that come with a chip or remote are harder to recycle because of the plastic around them. But here is the good news: There are places that will pay you for old key remotes if they are still in good condition. Remote Recycle is one example. They offer up to $10 per piece. Typically, they only buy lots of 10 key remotes or more, so if you are looking to dispose of a single remote, see if any friends have old keys that you could include in your package. You can also see if local car dealers participate in this program and will take the remote off your hands. It may not make you any money, but at least you know the old remote is not sitting in a landfill.

Put keys back to use for good

There are several charitable organizations that accept old keys, recycle them and put the proceeds to work for good. Key for Hope raises money for organizations working to end hunger. Keys end up at their recycling facility in Massachusetts, but they can give the money to the organization of your choice anywhere in the country. Key for Hope also takes other small metal items such as padlocks. Keys for Kids has several programs that use keys as fundraisers. Students Recycling Keys encourages young people to collect keys to raise money for scholarships for their fellow students, while Tickets for Kids buys tickets to sporting events for families that could not otherwise afford to go. People who live in Minnesota can participate in Key to Recycle, which recycles keys and creates jobs for people with disabilities. Collection bins are available on their website.

How to reuse keys

Skeleton keys and plain old keys alike make beautiful arts and crafts products. A look on Pinterest yields many ideas for turning keys into new items such as jewelry, lampshades, Christmas tree ornaments and magnets. Keys make nice wind chimes because the jingling keys make a lovely sound when they blow in the breeze. Skeleton keys are particularly prized by crafters. If you have a bunch hanging around, try selling them on a site like Ebay or Craigslist. You can also donate unwanted keys of any type to organizations that sell secondhand arts and crafts supplies. Trash to Treasure in Fort Lauderdale and the Long Beach Depot for Creative Reuse are a few examples.