How To Stop Litterbugs

With a little effort, you can help stop the litterbugs from making a mess of your community. 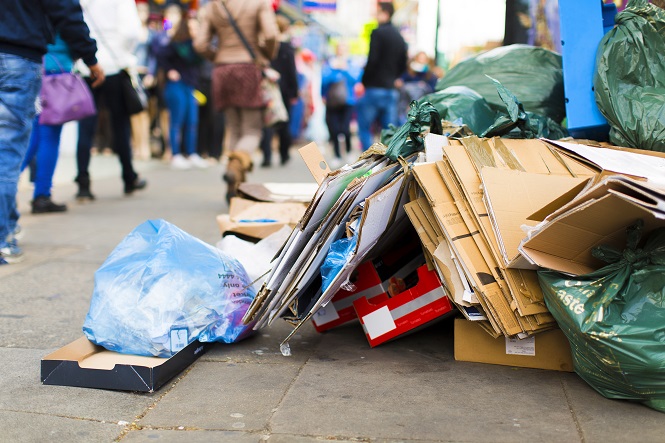 We’ve been officially told not to litter for over half a century now. The first public service announcement for litter prevention ran in 1956, and since then it’s been all pictures of ducks caught in plastic can rings. But still the message isn’t exactly ubiquitous. Just last week I saw a construction worker throw a crushed can down on some gravel he was flattening. The optimist in me wants to think that perhaps he dropped it and was planning on going for it in a minute. But that doesn’t explain the litter situation at our neighborhood park or along just about any highway. Let’s face it: We still have a ways to go in litter prevention. Below we’ll explore how to stop litterbugs, the grassroots movements trying to make a change and the real impact of litter.

Some facts about litter

The North Carolina Department of Public Safety has some interest, albeit depressing, facts about litter.
Further, according to the EPA, marine litter causes a shocking number of problems: killing wildlife that gets caught in it or ingests it, posing serious safety risks to humans (as in medical waste and discarded netting to divers), acting as a means of transport to invasive species as pieces of litter travel along currents, thousands of dollars lost in fishing revenue as hauls become contaminated with oil containers, paint tins and soil filters, driving away tourism at coastal areas. Even to this day, litter isn’t a joke. So what can you do about it?

Individual solutions to the litterbug infestation

Luckily, we don’t have to sit around feeling sorry for Mother Earth. There are a number of things we can all do at the individual level:

Be an example to others.

Always use trashcans and recycle bins. Don’t be the person who makes it OK for others to litter. The North Carolina Department of Public Safety put it well: “Clean streets and a clean neighborhood send a signal that people care about where they live and work […] When someone litters, others think it is OK and soon more litter accumulates. Before you know it, you or your community is covered in trash.”

Keep a portable trash bag, and if you need one, a cigarette dispenser in your car. With that option at hand, you won’t need to pitch your trash out of the window.

Make sure lids on garbage cans are on tight, tie up paper products and all trash bags. A main way a neighborhood can become filthy is loose garbage from windy trash days.

If you’re ever planning a party, make sure large trash receptacles are placed everywhere and in plain sight.

See trash? Pick it up.

Be the change you want to see.

Organize neighborhood trash pick-up events or get your organization (whether work or play) to adopt a highway for cleanup. At the very least, make sure no one litters around you. Become the master of the pointed stare.

Get involved in the campaigns.

Last year, the EPA started its “Hey Tosser!” campaign, where communities can hang a variety of materials reading, “HEY TOSSER! You know it’s wrong.” A survey revealed most people know littering is wrong but still do it when no one is looking. Hence the signs. You can find more information here. The EPA also has resources on anti-litter grants, strategies and programs here.

Speaking of taking it a step further, there are also tons of grassroots organizations working to mitigate the problems of littering that you could get involved in. One tactic is to get involved in education about littering. The Litter Prevention Program offers education on how to prevent littering. The program can be delivered to groups or you can help filter an anti-littering newsletter around to your litterbug friends. Other grassroots movements can be statewide. One such group, out of Tennessee, is working to get administrators, businesses and individuals mobilized to stop litter with the StopLitter campaign. Signs, banners, logos, website buttons and PowerPoint presentations make up some of the informational tools available. The site advocates asking local businesses, administrators and groups to get behind putting the reminders out to not litter. Then, there are the big groups. Keep America Beautiful is always working to stop littering and could use support. For some good news, in 2011, the organization reported a 42 percent reduction in cigarette litter in communities that implemented its Cigarette Litter Prevention Program, which raises awareness through enforcement of litter laws, public service messages, placing ash receptacles around and giving out portable ashtrays. The WWF is even working to control marine litter worldwide. Then there are the truly inventive campaigns. Toronto made headlines with their “Littering Says a Lot About You” campaign. Trash is organized to spell out words like “lazy” and “selfish” to describe litterers. You can see the eye-grabbing posters here. As far as getting involved in catching litterbugs, you can really get as involved as you want. The solutions range from starting community-wide campaigns to just being the responsible one with your trash. Despite nearly 60 years of official campaigns, littering is still an issue, so pick your method and get to work.