Innovators are exploring new materials for constructing our roadways in more sustainable fashion. 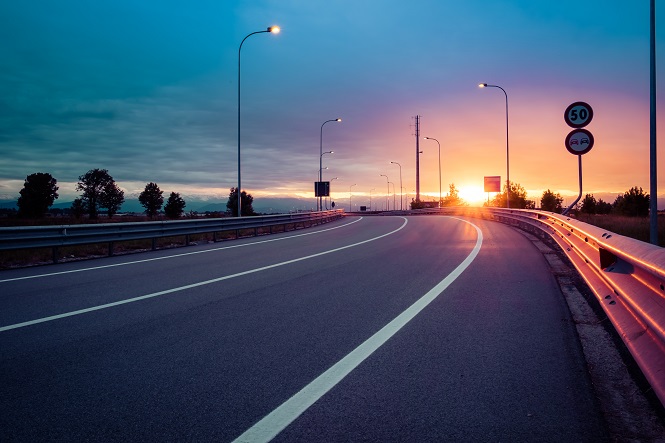 A little while ago, I opened up to you. I don’t know if you remember. I’m sure you’re probably used to all the attention, but for me it was special. I told you about my dream of building a spaceship, and how Thomas Freakin’ Edison ruined it with his stupid face. But I’m not bitter. Not at all. In fact, as I’ve gotten older, I’ve found there are much more important dreams than flying off to some distant planet. I know, because my wife told me they were. So now, my officially sanctioned dream is to watch my kids graduate high school, buy an RV, and never be seen again. By which I mean, go basically everywhere and see every single thing and never stop adventuring until we die. There are 6,586,610 miles of road in this country, and we’re gonna drive every inch. And maybe after that, we’ll drive on down to South America and see what their roads are like.

Yeah, just driving. You know, and seeing stuff and going places, but really just enjoying the journey. The only problem is, there are some pretty awful roads out there. I mean, by the time our little chicks have flown the coop, even the antique RVs will be fully electric and driven by Google. But the roads will still be bumpy, smelly, pothole-ridden asphalt. Or maybe not.

Turns out, Europe is already on it. A Netherlandish company called VolkerWessels has decided that it’s high time we did it better. It noticed that roads kinda suck. It also noticed that there was a practically endless supply of plastic just sitting around, waiting to be recycled. I’m fairly certain two engineers were walking down a hallway, each thinking about one of these problems, when one of them slipped on a banana peel and they bonked heads. Their little cartoon birdies mingled together, and plastic roads were born! But what’s so cool about plastic roads? For starters, they’re easy to build. They’re modular and prefabricated, so construction time is basically as long as it takes to sweep all the asphalt off. For seconders, they’re hollow, which means there’s room to run electrical lines and drainage pipes where they’re safe from nature’s fury. They’re sturdy, but also easy to replace, in case one breaks, or needs an upgrade. Personally, I’m concerned about traction and durability. Plastic isn’t a very hard material. And, while there are different types of plastic with different levels of hardness, most won’t stand up to a Denny’s steak, let alone the truck delivering it. And I feel like it’ll be slippery when wet. Again, like a Denny’s steak… They’re still in the idea phase right now, but there’s some pretty strong Netherlandian support for the project. And I know what you’re thinking. Plastic roads sound pretty cool. How could you possible upgrade them? And I say unto you …

Another engineer with a dream, one Scott Brusaw, has decided to take that one step further (technically first). Scott’s dream is to turn every road in the world into a honeycomb of solar panels, pumping 1.21 gigawatts into each of our cars and shooting us directly off into the future. Or, at least, make it so we can’t tell the difference. Solar Roadways are equipped with a number of features, including heaters to melt that pesky snow and make sure my kids don’t get any snow days (I want them to graduate as soon as possible). They’re also packing a network of LEDs, which can be programmed to show any pattern you’d like. This, of course, will lead to the most interesting graffiti campaign in history. Aside from that, though, they can be used to mark traffic lanes, signal when there’s an obstruction in the road ahead, mark basketball courts, and move handicapped parking spaces so people get tickets. According to Scott, if every road in the country were replaced with his solar roadways (he’d be stupid rich!), they would cleanly produce three times the amount of energy that America uses each year. There are some other, somewhat hyperbolic claims on the website and in the videos, and there seems to be some pretty vocal opposition among whiny-voiced Australians, for some reason. But what the detractors fail to allow for is the fact that both of these technologies are still in development.

So you got our hopes up for nothing?

Now, don’t be so hasty. Not for nothing. Okay, plastic roads aren’t officially a thing yet. And Solar FREAKING Roadways have their issues (like 9 years of development with no real progress…), but what each of these individual projects lack in practicality, it makes up for in raw potential. These are the ideas that will lay the groundwork. And then, someone else will come along with a little improvement, or a little bit better business sense, and make it work. Or it won’t, but someone else will follow along, and eventually it’ll happen. These are the types of ideas that end up changing the world, not because they’re particularly effective themselves, but because they make people think. And I fully believe that, sometime before my kids graduate high school, the country’s roads will have been mostly replaced by some combination of these two technologies. When that happens, I’ll have a beautiful surface on which to live out my wife’s dreams. It’ll be smooth sailing. Joke’s on her, though, because driving 6 million miles in an RV is basically just jumping on a spaceship that has an Arby’s on board.