Recently finished a home project? Tempted to toss out that leftover paint? Don’t do it! Check out how you can responsibly recycle old paint. 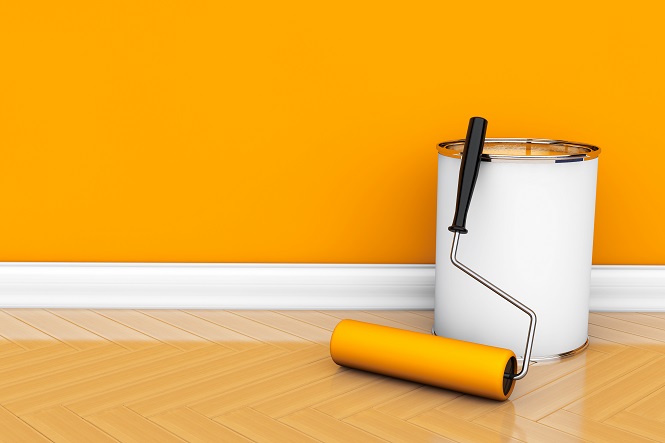 How to properly dispose of leftover paint should be an important consideration when starting your next painting project. The Environmental Protection Agency (EPA) estimates that people in the U.S. throw away approximately 69 million gallons of paint every year. That is millions of gallons of potentially useable paint going into our nation’s landfills every single year. To prevent your next painting project from becoming wasteful, you should start by purchasing only the amount of paint that is needed to complete your project. You can easily calculate this with the Sherwin-Williams’ Paint Calculator at Sherwin-Williams. If you find you have more paint than you need when your project is completed, consider donating it to a local charity or share it with a neighbor. There is also another option: You can make sure that your old paint is being recycled in a responsible manner with PaintCare. PaintCare is a nonprofit organization that was started to facilitate paint stewardship programs in the U.S. in states that have passed paint stewardship laws. The program is funded, according to PaintCare, “through fees on each container of architectural paint sold in states with paint stewardship programs. Budgets and fees are set on a state-by-state basis.” In 2009, the first paint stewardship law was passed in Oregon. The law required paint manufacturers to start a program to reduce paint waste, increase paint reuse and recycling and responsible disposal of unusable paint. This resulted in a pilot program that was so successful that legislation passed in 2013 to make the program permanent. According to PaintCare, since 2009, “Seven more states and the District of Columbia have passed paint stewardship laws similar to the one in Oregon.” PaintCare has programs in California, Connecticut, Minnesota, Oregon, Rhode Island and Vermont and is planning programs for Colorado, Maine and the District of Columbia. Additionally, it expects similar legislation to be introduced in several more states in the next few years. Before PaintCare, the best option for recycling or disposing of unwanted paint was to go to your local household hazardous waste facility and community “round-up” events with limited days, hours and locations. In states with PaintCare, many new paint drop-off locations have been established. In California alone, there are 738 drop-off sites and most PaintCare locations are at paint retailers who volunteer to take back paint. These retailers are able to take back paint during regular business hours, which makes paint recycling and disposal much more convenient for local residents. In PaintCare states, there is probably a drop-off site near you. Visit the Site Locator to find sites in your area. Are you in a state that does not currently have a paint stewardship law? Not to worry, in other states, the PaintCare locator will list your nearest local household hazardous waste program. When you decide it is time to recycle your paint, it is always a good idea to call the site ahead of time to confirm its hours and to make sure it has space to accept the amount of paint you would like to recycle. For more information about PaintCare, visit http://www.paintcare.org/.