How Sustainable Are Distilleries?

You may never have guessed about it, but some makers of Scotch, rum and bourbon are leaders in sustainable production practices. 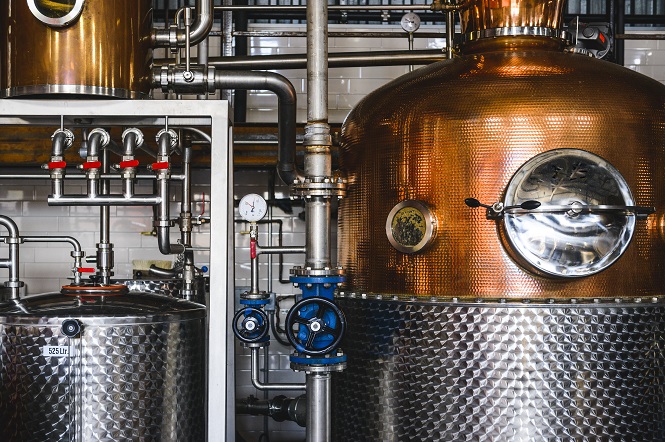 I don’t want to sound too Ron Burgundy here, but I love Scotch. Someday, when I’m the star writer for the blogging equivalent of the NFL (the NBL?), I’ll get home every night and pour a dram of Johnnie Walker Blue from my crystal decanter, sit down in my wingback chair and nurse my writing injuries, hoping they won’t force me into retirement next year. Until the angel investors accept my proposal to start the league, though, I’m left with a little too much time to think about my love for the Blue Amber. Because, at $200 to $300 a bottle, think is about all I can afford to do. But hey, what if…? Nah, it’d never work… But what if…? It’d never work, right? Maybe not, but…

What if I made my own Scotch!

Holy crap, how have I never thought of that before? I could make Scottish gold right in my own home! Okay, so how do we make Scotch? It looks like we malt the barley, dry it, mash it up, ferment it, distill it, and then wait for about three years. Piece of cake (except for the waiting part. I wonder if it’d kill me to drink it early). Still, those are some pretty heavy start-up costs. I’d need to buy a kiln, a still and some oak casks to age it in. And, while I’m thinking about costs, what about the long-term ones? Not so much monetary, because I’m sure I’d have a delicious product I could sell to tide me over in those post-NBL years. But what about the environmental costs? I mean, there’s a lot of kiln-firing and still heating and wastewater in the form of wort, which is the yeasty-sugary-grainy slurry that’s left over after all of the holy elixir has risen up out of the still. But if I’m worried about my own footprint when making whiskey, should I be even more worried about the large distilleries? Surely, they must have exponentially more wastewater and energy use than me.

It turns out, a lot. That wastewater thing wasn’t the half of it. That wastewater is full of biology things like bacterias and yeasts that chemistry the crap out of whatever ecosystem they get dumped into. There are a lot of fossil fuels that go into the heating and reheating process. Tons of grains are dried in massive kilns before they’re smashed up and heated just to the point of evaporating the alcohol. That can take a while. Even the glass that’s used to bottle the smoky nectar has to be taken into account. A couple billion fancy bottles can take quite a toll, especially when you’re just gonna decant it anyway. But, large distilleries have a solid advantage that I don’t. Because they’re making booze, they have nearly unlimited funds with which to improve their operations.

What steps are distilleries taking to reduce their impact?

More and more distilleries these days, ever since Bacardi got into trouble, are moving their wastewater treatment on site. They clean the filth out of it, then send it back out to the water supply for irrigation. Some distillers, though, like Maker’s Mark, go a step or two further. The Maker takes the wastewater, squeezes the grain out of it, tosses in a bunch of anaerobic bacteria, and lets that ferment for a little while. In return for feeding the bacteria filth, they produce methane, which is pumped to a different part of the plant to run the boilers. The leftover grain goo is then shipped around the neighboring states to feed to cows. Don’t worry, it’s non-alcoholic. Don Q Rum blows even that massive effort out of the water. Every part of its operation is optimized to have the smallest impact possible. The CO2 created during fermentation, for instance, is sold to local soda factories for carbonating beverages. The methane from the anaerobic process is used to boil the wastewater, which turns into steam used in the distilling process. Before it gets there, though, the steam spins a turbine that powers the plant. The slop that’s still left over is split into solids and liquids, which are used for fertilizer and irrigation, respectively. I mean, I almost want to go buy a bottle just to support the amount of work they’ve done here. I know what you’re thinking. Don Q is rum, and Maker’s Mark is bourbon. We came here to talk about Scotch, the only one of those choices bold enough to demand a capital letter. Well, let me introduce you to the Scotch Whiskey Association. They’re the Scottish version of the NRA, a hugely powerful lobbying group made up of over 50 brands. They’ve been kicking the industry’s butt since before WWI. Because of them, there’s actually a law that dictates what can be called Scotch, and they’ll sue the pants off of anyone who takes the name in vain. And now they’ve set their sights on reducing their footprint. Their plans include everything from proper management of water from supply to discharge, breaking away from fossil fuels to use renewable energy, making all of their packaging recyclable, and even ensuring their casks are sourced from sustainable forests. Under pressure from the SWA, Scotch makers have basically no choice but to shape up. So, maybe it would be better if I just left the Scotch making to the professionals – environmentally and legally. I wouldn’t want anyone to think I was making Scotch that doesn’t meet the legal definition. And I have no idea where to get anaerobic bacteria. But, if you have any advice for either, let me know in the comments. Or, just stop by and we’ll talk about it over some Scotch.