Do You Need It? Or Do You Just Want It?

Some things you want, like really, really want. But do you need them so badly it’s worth the depletion and use of the earth’s resources? 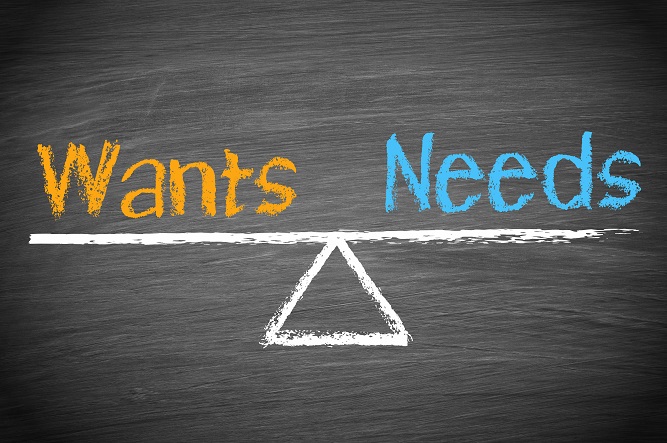 Have you guys seen the Tesla Model X? That thing is freaking amazing. It’s fully-electric, seats seven and can go 250 miles on a full tank of electricity. More importantly, it’s got Falcon Wing back doors that open up like a spaceship, the front doors know when you’re coming and open for you (don’t ask me how they know it’s you, because I’ll say magic), and active collision avoidance that will steer you away from a side impact. But most importantly, as you’ll find out Friday, it has a bioweapon defense mode. All of the air coming in gets sent through a HEPA filter that catches approximately 108 percent of all airborne pathogens. And there’s the little added bonus of it being able to drive itself. What I’m trying to say is that I absolutely, unequivocally, life-or-death must have a Tesla Model X in my driveway the very second they’re available. I need one!

But do I really need one?

Psh. Duh. Bioweapon defense mode, you guys. You don’t know how often that would come in handy in my life. Okay, maybe not so handy most of the time. And I guess I don’t really have to have Falcon Wing doors, and I’m perfectly capable of opening a door myself, even if it would make me feel like a Jedi every time I went into the parking lot. Let’s be honest. I’d abuse the power. In fact, the only things that still really catch my eye on closer examination are self-drive (again, something I can do myself), collision avoidance (I’ve managed to get by so far) and the fully-electric part. But on the other hand, I have a car. It’s not flashy, and it’s getting on in years, having just turned 140,000, but it’s paid for. And another thing, it’s already been manufactured. There’s no doubt that electric cars are greener than gas guzzlers, even when you take into account the higher emissions in the manufacturing process. But there’s still a manufacturing process, which means more steel has to be smelted, more rare earths mined and more plastic trees cut down. All because I wanted something new.

How we can reduce the need to recycle?

Here’s the thing about creating something: It takes materials. The law of conservation of Troll dolls says you can’t make Troll dolls out of nothing (and you also can never destroy them…). You have to have something to start with, some raw materials that will become your product. Because we want to conserve our plastic forests, we try to reduce the amount of raw materials we pull from the earth by recycling wherever we can. But recycling takes something and turns it into something new. That process takes energy. You know what uses less energy than both of the above? Doing nothing. We talk a lot on this blog about reusing and recycling, but we tend to skip over the first “R.” In case you don’t remember, his full name is Reduce. See, if we all stop buying stuff, it’ll no longer be economical for those things to be produced, and we won’t have to worry about the emissions from those products as they’re created. We consume at a ridiculous rate because right now we have more money and free time than ever before, and we’re constantly bombarded with advertisements that swear we’ll all die if we don’t go out and get the latest edition of the pocket vacuum/stun gun, even though you have the previous five versions in your coat closet collecting dust. I know what you’re thinking. “But I can’t just stop buying stuff! I need stuff to live! I must maintain a Certain Standard of Living equivalent to or greater than my neighbors.” Now, I’m gonna be as gentle as I can with this, but it’s gonna hurt. You sound ridiculous. You don’t need a Certain Standard of Living. Knock it off. You just need to know how to separate needs from wants.

How to separate needs from wants

Let’s do a few comparisons here to help us tell the difference between the two, in no particular order You guys kinda see the difference there? I’m gonna go ahead and put this out into the world for you to chew on: If there’s a commercial for it, it’s probably a want, not a need. I define a need as anything that’s required to live a happy, healthy, successful life. Everything else falls into the want category. But see, that’s where it gets tricky. When we start talking about nebulous, indefinable things like happiness, it starts to get fuzzy. You have to determine if the thing you’re looking at will truly contribute to your health, happiness or success as a human being. In most cases, I’d bet dollars to pesos it won’t. I’m probably gonna take some flak for this, but I promise you that spending four hours a night veg’ed out in front of a Scrubs marathon on your wall-sized plasma TV won’t make you any happier or any more successful (unless you’re a screenwriter, in which case you should take every single note), and it certainly won’t make you healthier. But what if instead of buying the TV, you learned to paint. Maybe you whip up a masterful family portrait to hang up, instead. Every time you see it, you’ll think, “I made that, and it’s pretty okay.” And you’ll be just a bit happier. More importantly, you’ll have saved the resources needed to create the TV, you’ll have learned a skill, and you’ll have gotten off the couch and moved around.

How to reduce your wants

Listen, I’m not judging. We all grew up in a consumer culture. We’ve been bombarded with advertising for the next big thing since the day we were born, and it’s only getting worse. Fixing that is step one to reducing your wants. Stop watching TV. Get an ad blocker for your web browsing. Sing loudly in the car instead of listening to the radio. Your passengers will thank you. The point is, reducing the amount of sales information you take in will automatically reduce the number of things you think about buying. I haven’t watched TV in months. The only reason I knew about the Tesla X is because I stumbled across it while researching another article. And I find that I want significantly less than I did before. Step two is to honestly ask yourself if this new thing will make you happier. Think about your life up to now. You haven’t had a complete collection of original Troll dolls so far and you’re doing just fine. Chances are you’ll continue to do just fine without it. And the final step is to think about the impact of your decision. If you buy that new car, you’re cutting two tons worth of material out of the earth. If you buy that new phone, you’re destroying China. Melodramatic? Maybe. The absolute truth? You’d better believe it. I guess what I’m getting at is, I want a Tesla Model X. But I don’t need one. And if we all start to make that distinction in our purchases, we’ll go a long way to reducing the amount of materials we consume. Our recycling efforts might be able to keep up with our consumption and we won’t have to mine virgin materials. And we’ll all be healthier, happier and more successful.