How Store-Bought Halloween Costumes Could Be Hurting the Environment

With Halloween around the corner, you may be tempted to buy a pre-made costume. But treating the holiday as disposable can cause serious environmental damage. 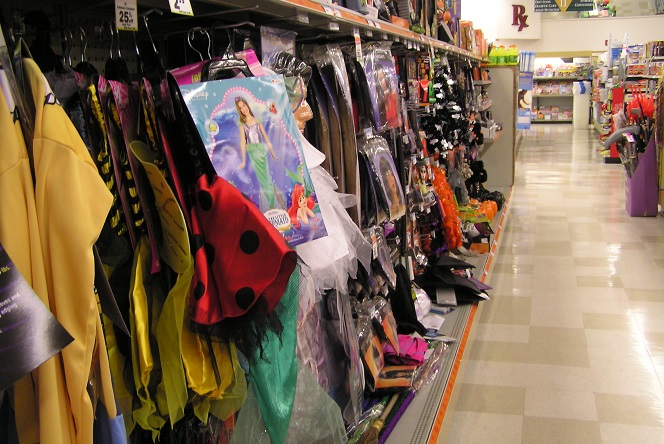 Halloween is big business. In 2014, the U.S. planned to spend $7.4 billion on Halloween, between costumes, decorations, candy and other holiday merchandise, according to a survey conducted by the National Retail Federation. Sixty-seven percent of survey participants said they planned to buy costumes (not make, buy), and participants said they would spend more than $350 million dollars total on costumes for their pets. Back in 2011, the average American spent $72.31 on Halloween. Americans planned to spend $2.8 billion on costumes overall in 2014. And with that big business comes big waste.

Halloween costumes and their sucker punch to the environment

The textile industry has always been a major waste challenge. Eighty-five percent of clothing gets thrown out and ends up in a landfill. The U.S. generates about 25 billion pounds of textiles each year, or 82 pounds per U.S. resident. The 15 percent of clothing that gets donated or recycled amounts for 3.8 billion pounds, or 12 pounds per person, while 21 billion pounds become textile waste. And it gets “better.” Between 1999 and 2009, post-consumer textile waste grew by 40 percent, while the diversion rate only went up by 2 percent. Halloween only adds to the problem, thanks to the social stigma of going as the same thing every year. No one wants to be that person. So much so that adults are investing in Halloween costume consultants. The service has a nice little price tag of about $500-$600, including the costume the client keeps. “I’ve probably spent over $2,000 on costumes with her, but it’s worth it for these interesting, one-of-a-kind standout pieces,” one of the clients said to the New York Post. “I hope [Lane] does my wedding dress!” We’ve put Halloween costumes on a pedestal close to a wedding dress, another garment you only wear once. But the problem is, when you generate so much textile waste it doesn’t go and decompose nicely in the landfill. It has very serious consequences for the environment. According to Planet Aid, “When solid waste such as textiles are buried in landfills they release greenhouse gases as they decompose, including methane, a particularly destructive substance. Similarly, at the other end of the clothing life-cycle spectrum, the production of textile fibers and the manufacture of cloth burns considerable quantities of fuel that releases CO2 into the atmosphere.” Other benefits of less textile waste that Planet Aid listed include taking up less landfill space (Planet Aid collects about 100 million pounds of textiles per year), less insecticide use since less cotton has to be grown and less polluted water. Planet Aid stated that 17-20 percent of industrial water pollution is from textile treatment and dyeing. Yet, while all this sounds serious, that isn’t to say you can’t enjoy Halloween. I adore Halloween; it’s my favorite time of the year. Luckily, there are plenty of donation and reuse options that will help you enjoy Halloween without killing the environment Freddy Krueger-style.

Tips for keeping that costume out of the landfill

If you’re the sort who only likes to wear a costume once and be done with it, there are plenty of donation options out there. For instance, there are organizations that specialize in collecting and distributing new and gently used children’s Halloween costumes, such as Weendream and The Halloween Helpers. They’re great services for the time when your growing child may not fit into their costume from year to year. There are also services like Zealous Good, which helps connect people with donations to the organizations that need them. Or if you have the time, it probably wouldn’t hurt to do the legwork yourself. Zealous Good’s blog offered some advice on where to donate your old Halloween costumes:
If you’re the DIY type, you can also look into repurposing the costume into other get-ups. You can get creative here. Shred and tatter up old costumes to make them into zombie garb. Frankenstein the costume into something new: Repurpose fairy wands by attaching the star portion to a hat to make a wizard this year, grab silver gloves off a knight costume to add to an astronaut costume, re-tailor a woodland nymph costume into Poison Ivy. Or if you’re going to buy new costumes, wear them for a few years. Contrary to popular belief, there is no shame in going as the same classic pirate every year. You may get a little teasing, but people will adapt to the consistency. I went as a witch for three years in a row at a point, and the world did not end. Otherwise, if you’re really into variety, you can also make small changes to the costume. Add some lace, switch out a skirt portion or add bobbles to a hat, for instance. That would be just enough to shake it up from last year. Another option is to have a set of three to four costumes you rotate out every year just for some change. Or have the same costume for a few years, but go to different parties each year and donate the costume when you want a change. You can also swap costumes with family or friends. Still another option is to get to the source of the issue and make your Halloween costume from upcycled or reused regular clothes. That way, new textiles didn’t need to be created just for your once-per-year jaunt to a Halloween party. Wear all pink or grey with some cat ears or a pig snout. Own a certain dress because it reminds you of a certain character? Run with it. There are tons of ideas out there, and don’t forget to get creative. As you can see, there are tons of ways to divert costume textiles from the landfill. Every Halloween does not necessarily need to be the newest, biggest fashion statement of your life. Have fun with Halloween, and don’t be afraid to get creative.