Spices: Which Can Boost Health?

Which spices reduce inflammation? Which herbs can help you relax? Find out below! 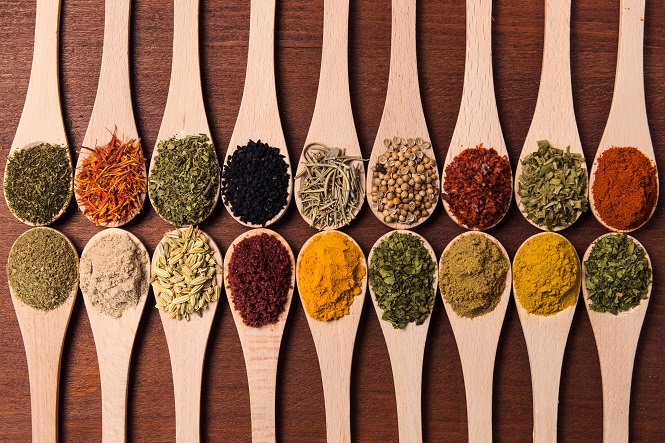 Herbal remedies can get downright confusing. Old wives tales can send you running to the grocery store to try slathering your face with lemon juice for a better complexion (personally, I’ve found it to be sticky and weird-smelling). Relatives say apple cider vinegar cures migraines caused by a concussion. Then there are the truly insane home remedies: earwax to cure cold sores, chocolate-dipped garlic for memory loss, urine for acne woes. But just because we overdo it doesn’t mean there isn’t a nugget of truth to be found in home remedies. For instance, willow bark was a popular precursor to aspirin for headaches. Willow bark contains salicin, which the body turns into salicylic acid. Later, chemists figured out how to extract salicin and turn it into salicylic acid, which was a popular pain reliever. That was later refined into acetylsalicylic, aka aspirin. It goes to show that nature is a good place to look for remedies, if you know what you are doing.

John Hopkins Medicine has some good precautions to take into account when trying herbal supplements for health. Many herbs can be toxic if taken in wrong doses, so you should research a remedy carefully before trying it. You’ll need to know what the recommended doses are and try to research any official, independent studies to support the effectiveness. Follow any labeled dosages carefully. You may want to consult with a doctor before using some remedies to make sure you’re safe. Watch for side effects like nausea, dizziness, headaches, upset stomach or anything else out of the ordinary. Watch for allergic reactions, like difficulty breathing or rashes, as well. Also, make sure to look into the company that is making the herbal supplements, if you go that route. The company shouldn’t make any “too good to be true” statements or vague promises that are hard to verify. Their own products should be well researched. The label should list standardized doses, side effects, ingredients and instructions. It should, in effect, look like a real medication bottle as far as labeling and instructions go. The company should also be easy to contact for more information about the product. With all that in mind, below are some herbs that are known to boost health, complete with studies to support the health benefits. Though always remember to consult with a doctor if health problems persist or get worse.

Boosting health with herbs and science

There are actually tons of studies out there supporting that natural herbs can help with certain ailments and health in general. Below are some herbs and their benefits to get started, complete with the studies that support them.
Garlic for colds: If you’re worried about cold and flu season, head to the natural supplement aisle. Participants in a study were asked to take a garlic supplement over a 12-week period between November and February. They reported less colds and a significantly shorter duration of illness when they did catch a cold over the control group. With flu season headed our way, it might be a good idea to look into garlic supplements.
Lavender for improved mood: This is an old and common remedy, but a good one. Lavender has long been associated with peace, relaxation, happiness and calm moods in the herbal remedy realm and is a well-known treatment of mild anxiety, stress, depression and inflammation. After all, what isn’t to love about the soothing scent of lavender?
Turns out, it even works on rats. A study looked at how daily exposure to lavender oil affected male rats with induced dementia. Anxiety and depression related behavior went down during maze and swimming tests. The rats’ memory even improved.
Chili peppers and abdominal weight loss: A study found that Capsinoids (a compound found in chili peppers) helped weight loss participants lower the fat content around their gut. Participants were given 6 mg/d of capsinoids orally.
Turmeric, the super spice: The active component in turmeric that is known for being such a health superstar is curcumin. This wonder drug of nature works as an antioxidant, has anti-inflammatory properties, protects the liver from toxic compounds, improves circulation by preventing platelets in the blood from clumping together, is antimicrobial, prevents cancers caused by chemotherapy and radiation, it lowers cholesterol, can possibly heal gastric ulcers and has a host of other benefits, as if all of that wasn’t enough. You can find supplements for it, or turmeric is the spice that gives the yellow coloring to curry and mustard.
Antioxidant spices vs. fat: Cinnamon may stave off the negative effects of high-fat content meals. Penn State researchers found that certain spices like rosemary, oregano, cinnamon, turmeric, black pepper, cloves, garlic powder and paprika (all noted for their antioxidant effects) lower the amount of fat in the blood stream.
“Normally, when you eat a high-fat meal, you end up with high levels of triglycerides, a type of fat, in your blood,” said Sheila West, associate professor of biobehavioral health at Penn State. “If this happens too frequently, or if triglyceride levels are raised too much, your risk of heart disease is increased. We found that adding spices to a high-fat meal reduced triglyceride response by about 30 percent, compared to a similar meal with no spices added.”
So remember to add the spices!
Peppermint for stomach ailments: Peppermint has long been a staple for upset stomachs. The home remedy adage has always been to have some peppermint tea on hand for stomachaches. Science agrees. Peppermint has been shown to relieve the symptoms of irritable bowel syndrome. The abstract from ScienceDaily stated, “Peppermint activates an ‘anti-pain’ channel in the colon, soothing inflammatory pain in the gastrointestinal tract.”
Echinacea/sage for sore throat: An echinacea/sage spray was given to some participants in a double-blind study for a sore throat. The result? Works just as well as chlorhexidine/lidocaine, which is a harsh chemical treatment made up of an antiseptic and local anesthetic. Here it worked to go natural.
And you don’t have to stop there. There are countless studies looking at the effects of herbs on health. Find the legitimate, independent studies published in recognized journals, and you could be on your way to improved health.