A Wearable to Save the Planet

Take a peek into the future of fashion – it’s all about intelligence. 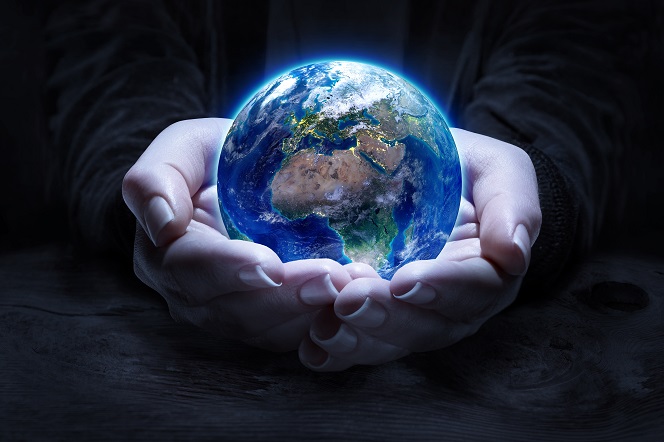 Ladies and gentlemen, I’d like to be the first to welcome you to the future! It’s Back to the Future Day. As you read this, Marty McFly is arriving in Hill Valley, California, in the greatest car ever modified. It’s a strange future, where his family has suffered for 50 years at the hands of Biff Tannin, who is now a multi-millionaire from a few well-placed sports bets. And, while BttF got a lot of things right about the incredibly futuristic futureness of today’s world, it was totally, completely, absolutely, 100-percent wrong about the way people dress. To the best of my knowledge, there is as yet no such thing as a vest with a built-in boombox. Although, there is a hoodie with speakers built in. We don’t wear our pants inside-out, our jackets don’t automatically dry themselves or adjust to our bodies, and our shoes don’t tighten themselves around our feet. Unfortunately, nobody wears double neckties, and sunglasses that look like steel plates aren’t a thing. For the most part, people wear clothing at the same technological level as the 80s, even if the styles have changed. Our accessories, however, have advanced far beyond the future we were shown as children.

The future of accessories

We’ve moved beyond wearing things just because they look pretty. We now require everything in our lives to justify their existence (and still look pretty). So, it’s only natural that our accessories have become gadgets that add value and functionality to our lives. Case in point, the Worldbeing. Worldbeing is a basically a bracelet that makes you think. And by “think,” I mean “feel guilty about your decadent and wasteful lifestyle, you terrible person.” It’s designed to track your carbon usage, giving you a readout of the percentage of your daily allowance that you’ve used. The goal is to make people realize how much CO2 they’re using and knock that crap off, thereby making the world a better place. But it doesn’t stop there. The device itself is made out of smashed-up bits of discarded electronics in a solid attempt at reducing the amount of e-waste in landfills. It has an e-ink display that uses very little battery, because the display doesn’t have to update itself constantly. It interfaces with a smartphone app to help you keep track of your carbon use and, according to the video linked above, send challenges to your friends and cook eggs and stuff.

What can the Worldbeing do?

A lot, apparently. It’s technically not in production yet, but by the time it’s all said and done, this thing will know more about you than Google. But don’t take that the wrong way, because it’s using the information for a good cause – yelling at you for doing things wrong and bad for the environment. The Worldbeing, once it’s fully-realized, will be able to store your credit card information so you can use it as a payment device, just like the NFC function on your phone that nobody accepts. Once you’ve made a purchase with it, it will analyze everything you bought and determine how much carbon was emitted in its production, using the Carbon Trust’s calculator to find values for each product. It’ll talk to apps like MyFitnessPal and pull in carbon footprint information on each of the foods you buy, based on where you buy them. Somehow, it’ll be able to tell your mode of transport when you go somewhere and track (or more likely estimate) emissions from your vehicles. It will be able to interface with your thermostat to monitor your heating and cooling, and your smart electric meter to keep track of energy consumption. It’ll talk to smart plugs (hopefully, that’ll be a free upgrade they send out to all of us) to determine appliance-specific usage. And, if the video is at all accurate, it will have a pretty strong social component, so you can share goals and challenges with friends and then laugh at them when they fail. The future of clothing is intelligence. This one product has the potential to create a wave of understanding about our individual carbon footprints and how they affect the world at large. It’s a small tool that can affect a big change, one person at a time. I’m okay with that future. A future where we’re all wearing clothing that fits the 1985 version of the future doesn’t sound like my cup of tea. Have you ever accidentally put your pants on inside out? It’s ridiculously uncomfortable. Except for the double neckties. Let’s all agree to do that.