LEDs: Everything you Needed to Know

What are LED bulbs, really? What does LED even stand for? And are they really the lighting solution of the future? 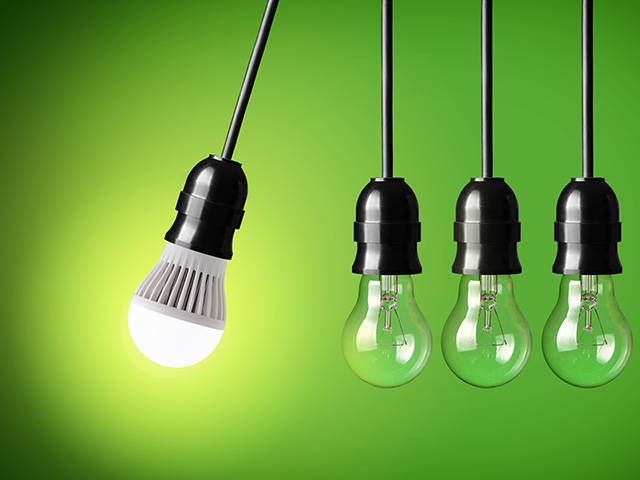 Everywhere you hear about LEDs: how they’re the future of home lighting, how they’re so much better for energy conservation, how you can save so much money by installing them. But what are LED bulbs, really? What does LED even stand for? And are they really the lighting solution of the future? Read on to find out everything about the LED bulb.

The basics of LED lighting

To start off, LED stands for “light-emitting diode.” A diode is a crystalline semiconductor connected to two electrical terminals. LEDs are a type of solid-state lighting, since they use diodes rather than gases or plasma, like other types of lighting.

The Edison Tech Center describes the inner workings of LEDs as such: “LEDs create light by electroluminescence in a semiconductor material. Electroluminescence is the phenomenon of a material emitting light when electric current or an electric field is passed through it – this happens when electrons are sent through the material and fill electron holes. An electron hole exists where an atom lacks electrons (negatively charged) and therefore has a positive charge.

“Semiconductor materials like germanium or silicon can be “doped” to create and control the number of electron holes. Doping is the adding of other elements to the semiconductor material to change its properties. By doping a semiconductor you can make two separate types of semiconductors in the same crystal. The boundary between the two types is called a p-n junction. The junction only allows current to pass through it one-way, this is why they are used as diodes. LEDs are made using p-n junctions. As electrons pass through one crystal to the other they fill electron holes. They emit photons (light).”

LED in its most commercially recognizable form dates back to 1962, when the first red luminescence diode was developed by Nick Holonyak. It was the first LED in the visible wavelength, making it the first industrially produced LED. Then, up until the mid-1990s, LED lighting was refined and new colors were introduced.

Then in 1995 the first LED luminescence conversion white light was unveiled and made it to the market two years later. By 2006 LEDs could produce 100 lumens per watt, an efficiency only outdone by gas discharge lamps. And LEDs have only gotten more powerful, to where companies are claiming 303 lumens per watt in LED lighting.

So now that we’ve had the science and history lessons, how does all this make LED so superior?

LEDs get even better when you go for the ENERGY STAR rated bulbs. These bulbs are subjected to rigorous testing. The certification measures light output minimums to make sure you’re getting the right amount of light and light distribution requirements mean the light is shining where you need it. The testing also includes stress tests in home-like environments, ENERGY STAR requires a three-year minimum warranty, it verifies compliance with 20 different industry standards and the bulbs undergo long-term testing to make sure they really last.

But not everything’s perfect. Could sticking to CFLs really be the way to go?

One of the main criticisms of LEDs is the color intensity to them. They’re kind of like putting the sun itself into a lampshade. Though there are LEDs on the market that emit more of a yellowish light, rather than that searing blue-white light, so be sure to check the “lighting facts” label on the site of the bulb you’re looking to purchase if you want a softer light.

Also, since LEDs only emit light in one direction, many tend to be better for recessed lighting, rather than lamps that are in place to light up a whole room.

From a technical standpoint, the rare earth metals in LEDs are also subject to price control issues from different nations, according to The Edison Tech Center. Also, LEDs don’t burn out the way more traditional bulbs do. They gradually fade so that you’re left with a reduced lumen output over time.

The future of LEDs

However, LEDs just keep improving. Yes, LED bulbs have been plagued by their problems with light dispersion, and they have been on the more pricey side. This comparison chart from EarthEasy shows that CFLs and LEDs have a history of coming up about equal in the energy savings realm, both a little under $90 for 50,000 hours of light.

However, many LEDs now come with diffuser lenses to disperse the light around an entire room. And LEDs have been on the more affordable end for several years now as the technology has advanced. For instance, just last year, LED manufacture Cree got rid of the bulky heat sink that kept the bulbs cool, but also drove the price per bulb up by a couple dollars.

IEEE Spectrum reported, “In [Cree’s] new design, heat is removed from the LEDs through convection, or a flow of air through the bulb. The LEDs are mounted on circuit boards, rather than the metal tower. As the diodes heat up, they draw air from outside the bulb through small vent-like openings at the base and on the top. Because hot air rises, air flows continually through the bulb to cool the LEDs. The airflow circulates whether the bulb is vertical, horizontal or upside down.”

If there was ever a green technology to keep an eye on, it’s LED lighting.