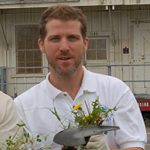 Maryland native Robb Hampton didn’t realize his true calling until he attended Arizona State University, where he was exposed to the beauty of the outdoors and the public park lands of the western U.S. After a stint with the National Parks Service, Hampton landed at the National Environmental Education Foundation as a program coordinator, eventually heading the National Public Lands Day initiative. National Public Lands Day, the largest single-day volunteer event for public lands in the U.S., began in 1994 and is held on the last September of each year. Events range from small-scale community meet-ups with 10 or so participants to massive clean-ups involving thousands of volunteers. Robb Hampton appeared on the Green is Good radio program on September 17, 2011.