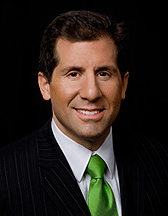 John S. Shegerian (born November 16, 1962, in Queens, NY) is an American entrepreneur, environmental and social issues activist, international public speaker and the Chairman and CEO of Electronic Recyclers International® (ERI). Established in 2002, ERI is an electronic waste collector and recycler, specializing in the environmentally safe and socially responsible dismantling of electronic items such as computers, televisions, monitors, cell phones and more. Under Shegerian’s leadership, ERI has fast become the leading recycler of electronics in North America. Shegerian, like ERI, is based in Fresno, CA. Prior to his founding of ERI, Shegerian was also the co-founder and CMO of FinancialAid.com, one of the most successful student loan companies in the country. While at FinancialAid.com, John created RateYourCampus.com (a college student polling and feedback community) which then led to the creation of CampusDirt.com (which evolved into the most relevant and trafficked college search engine). Last but not least, CampusClix.com was created and became one of the first college social networking properties on the Web. In October 2004, Shegerian and his partners sold FinancialAid.com and all the aforementioned affiliated properties to Education Lending Group, which was purchased for $400M in February 2005 by CIT (NYSE: CIT). For his work with ERI, Shegerian was named the Clean Tech Entrepreneur of the Year for Northern California by Ernst & Young in 2008 and placed into the prestigious Ernst & Young Entrepreneur Hall of Fame. Beyond his successes in the realm of high-tech ventures, Shegerian is driven by his commitment to innovate and develop companies that benefit and inspire others and are socially responsible. Shegerian has a 25-year track record of quickly converting startups into large, highly successful business enterprises.