A few furballs in the house is a good way to keep things nice and green.

You wouldn’t know by looking at them, but my four felines are staunch environmentalists. Geriatric though they may be, these 13- to 15-year-olds prove day in and out that going green isn’t just for the MTV generation or the crunchy granola crowd — they’ve clearly proven that you’re never too old to learn a few new tricks. Their steadfast eco-vigilance demonstrates that as long as you have a flicker of sympathy for Mother Nature’s plight, your position on the evolutionary scale and your actual species matters not. So, when Persephone, Artemis, Snagglepuss and Cyrano aren’t busy sleeping (which is admittedly most of the day), they embrace any and all conceivable green lifestyle efforts with a combination of eco-adaptability and sheer creativity.

Cyrano, named after the famous French writer Cyrano de Bergerac, never met a slow and steady drip that he didn’t love. When he’s not busy gingerly sucking up the tiny bits of moisture clinging to the underside of my faucets, he is especially fond of lapping up the reservoir of water in the sink where my dirty dishes happen to be soaking. Lately, he’s also been slurping the top few inches out of my watering can — the very same can that is filled with bat guano/earthworm casing organic fertilizer. I guess he’s got a nose for black gold? Other areas where he and his cohorts’ water conservation efforts shine include the post-shower drying-off-ritual, in which I am generally greeted with at least two to three tongues eager to dry me off sans towel. Sandpaper tongues, as it turns out, prove to be quite efficient at removing all traces of water droplets from knee to toe. They also hate to allow the perfectly good H20 pooling up in the bottom of the shower pan to go to waste, and are equally as diligent about dipping their head into unguarded glasses of water or tea. 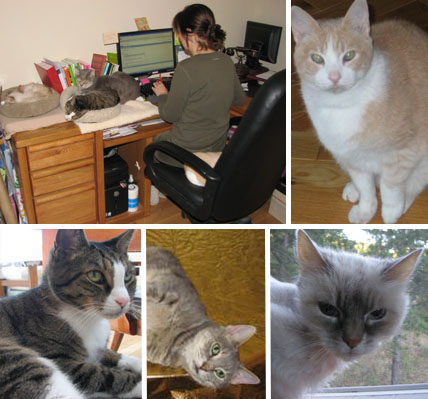 Talk to any cat owner, and they’ll bemoan the fact that far too much of their mucho-pricey canned food ends up drying out and is ultimately discarded. Despite having “type A” finicky eaters, my cats have manufactured a highly technical yet consistently successful system of food exchange and cleanup during their mealtime that rivals no other known to catkind. There is no such thing as waste in my household. They begin by noshing on meals in separate rooms (in order to prevent competition). After about 10 to 15 minutes, they inevitably grow tired of the food on their plates, only to discover that their siblings’ meals are far more exciting (despite the fact that they are indeed identical). Let the swapping begin. By the end of the half-hour process, the only thing remaining on my floor is varnish (thankfully) rather than random cat food chunks. They lick their dishes so clean, in fact, that I could easily reuse them multiple times without bringing soap and water into the picture. If you think this is where their food conservation expertise ends, think again. Anything that is not nailed down or kept far away from their reach is subject to their “waste not, want not” policy of food disposal. I’ve learned the hard way that cats who can reach boxes of corn flakes and dry pasta will more than happily claw through the cardboard boxes in an attempt to pre-compost them for you. Ditto for the chewed-up and spit-out remnants of gummed but not-quite-enjoyed pasta that they patooey all over the floor.

With four cats, there is no need to spend untold amounts on electricity simply to power an official electronic wake-up device. Save yourself some money by foregoing the modern convenience altogether or simply donate the quaint little dust catcher to someone who can really benefit! I haven’t relied on an alarm clock in well over one decade since I can always count on restless, moaning cats to cockledoodledoo approximately three-and-a-half hours before any human in their right mind should even consider standing on two feet. Amazingly, their collective cacophony of chirping, whining and impatient feed me’s is emitted like, well, clockwork — no matter what season, lunar cycle or hex you may be tempted to cast upon them. I’m this close to dabbling in black magic just to get one precious and uninterrupted night of sleep, but seriously, folks, what an electricity saver. If being brought to the edge of madness on a daily basis is infinitely less worrisome to you than your escalating carbon footprint, then I heartily recommend adopting your own whiskered brood.

Cats have the magical ability to manipulate their bodies into all sorts of contorted positions, but one that has served my household energy conservation efforts extremely well is the long and lean kitty stretch. My feline brigade sniffs out drafts like they’re nobody’s business and, particularly in the summer months, they are partial to extending themselves along the lengths of all the doors and windows in the house. Since I have no air conditioner, their small eco-efforts really add up over time because they cleverly keep a great deal of hot air from infiltrating the house. If you think that this is preposterous, bear in mind that cat fur has a remarkably insulating effect. For proof of my seemingly wild claim, all you need to do is examine the corners throughout my home. Go ahead, stick a toe in each dark zone, and you’ll see that amid the massive kitty tumbleweeds, it’s a good 7 degrees cooler there. Perhaps that’s a good reason to procrastinate vacuuming just a week or two longer? See, yet another energy-saving consequence of raising felines.

There is simply no reason whatsoever to keep noxious chemicals in your household when you are committed to caring for a menagerie of cats. As mine have proven time and time again, insects belong outside and can be appreciated from afar, but if they dare get caught in feline airspace, it’s curtains, plain and simple. Cyrano is the most avid hunter in the bunch, taking out crickets, moths and pretty much anything measuring 3 inches or less with the swipe of his hearty-sized paw. Despite having many discussions with him about how there are countless beneficial insects that we should just relocate, it’s challenging to reason with him, and I’ve decided that I am best suited for the task of searching and rescuing. Of course, there are certain critters that I’d rather not fuss with, and that’s where Persephone shines. Ants, lacewings, flies — she slurps them up with relish, yawns, and then goes back to sleep again. Even vigilant kitty greenies need to recharge their batteries every now and again.