You might not think so, but there’s actually an awful lot you can do with old cardboard. Meet corrugated artist Mark Langan!

Kellogg’s. All pictures used by permission of Mark Langan.

Sometimes it can seem like there’s so much cardboard lying around everywhere that there’s nothing left to do with it. One man thinks otherwise, however: cardboard artist Mark Langan.

Mark finds old and unwanted corrugated cardboard and recycles it to create amazing works of art. Manipulating the grains and textures of the malleable yet durable material, Mark is able to produce stunning multi-layered pieces.

Mark defines his work with cardboard as “corrugated art.” His decision to use the material almost came about by chance, but now it is at the center of his work. Talking about the attraction, he says, “I see it as an endless supply source that I purge from my trash and neighborhood, reusing it toward my creations.” 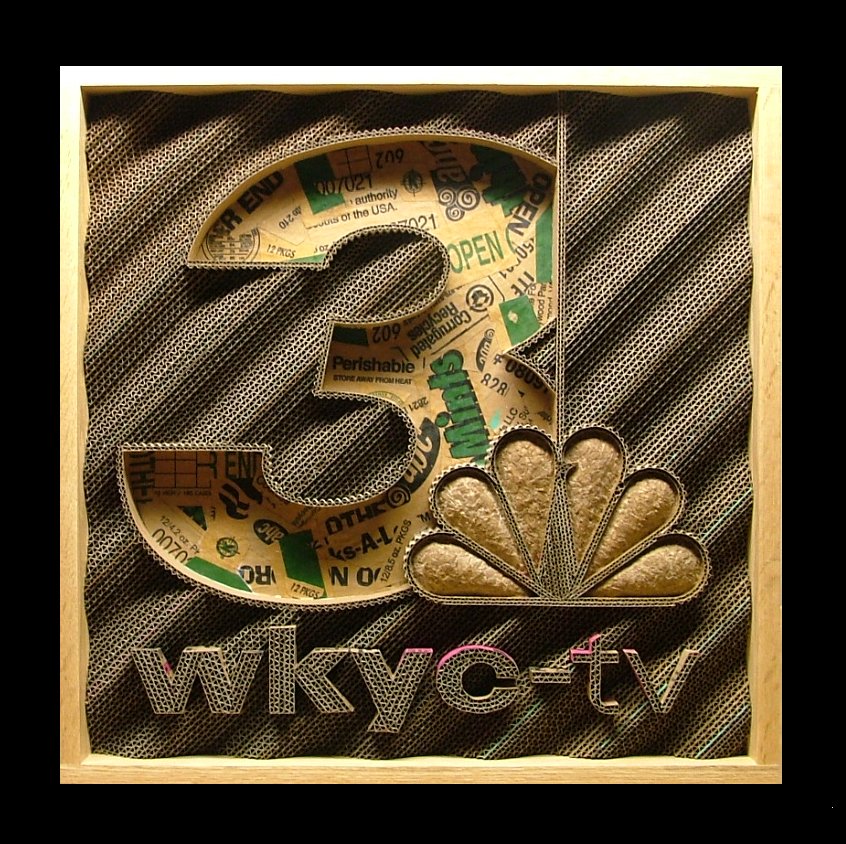 Indeed, there is more to it than simply using cardboard as a material. “[It] is the celebration of the unique properties of a highly visible manufactured product for which it was not purportedly intended,” he explains. You could call that some creative recycling — and with 90% of all products shipped in the U.S. being packaged in corrugated cardboard, he certainly has a point. 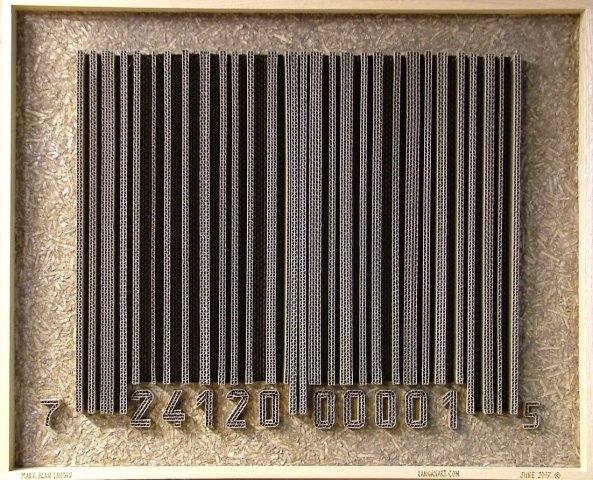 A particularly successful theme of Mark’s work (as you can see) has been to recreate corporate logos in cardboard. Mark has worked for a huge range of clients who are keen to call on his services to immortalize their logos in card, whether because they share his values (including recycling firms and manufacturers), because his artwork reflects their business (such as printers and the Midwest Box Company, whose logo can be seen below), or simply because they think his artwork is cool! 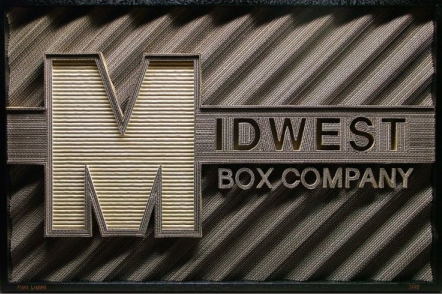 Each piece is made from entirely recycled materials and takes 80 to 100 hours of labor to complete. Many of Mark’s logos are even made from his clients’ products. The Kellogg’s logo seen above is indeed made from real Kellogg’s packaging! 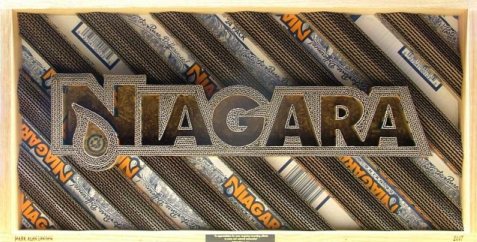 Mark starts the process by using a projector to expand the image of the company’s logo, carefully working the original shape into a vivid cardboard design. 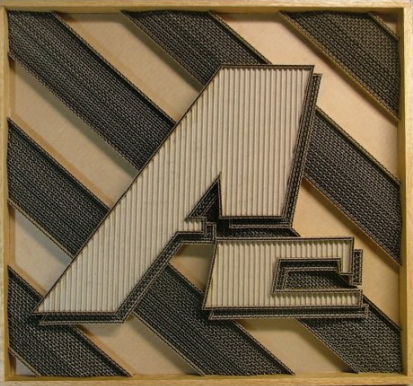 Then, using only a razor blade, a cutting mat and some nontoxic glue, Mark works his magic, repurposing and reshaping the material into something entirely new.

The piece above was commissioned by the M&M Mars Global Sustainability team and is on display at the company headquarters in McLean, VA, after it was presented to the company CEO. It is actually made out of real M&M Peanut candy case boxes, and is in the shape of a giant bag of M&Ms, featuring apparently creased ends! 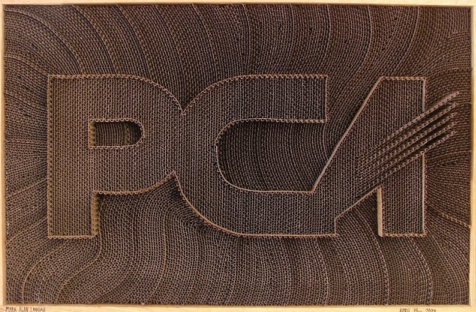 Mark doesn’t just work in logos by any means — in fact, he doesn’t even always work in cardboard, but also creates paintings and sculptures in a wide variety of media. 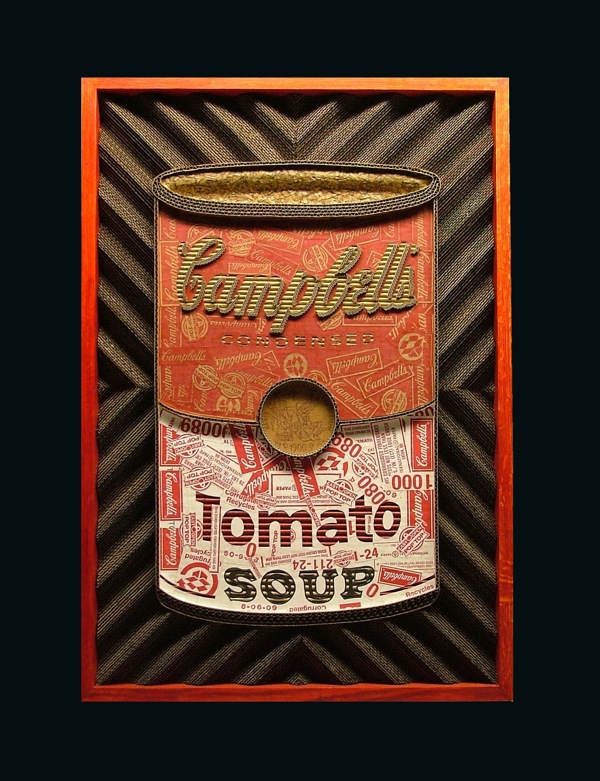 While the above piece might look like a logo, it’s not! Actually, this piece was one that Mark created for himself, inspired by Andy Warhol’s Campbell’s soup can. Mark describes himself as a huge fan of Warhol and says that the tomato soup can is one of his favorites. It certainly shows in the finished work! Mark’s attention to detail is ingrained in the image. It’s actually made out of corrugated Campbell’s soup can cartons, which Mark collected with the help of his local grocery store, Buehler’s. 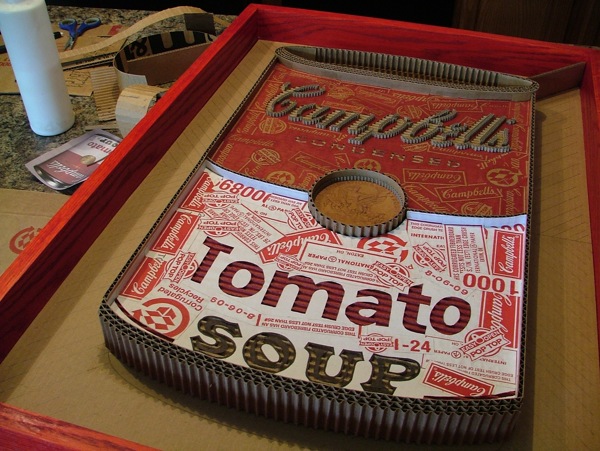 Campbell’s soup can side view 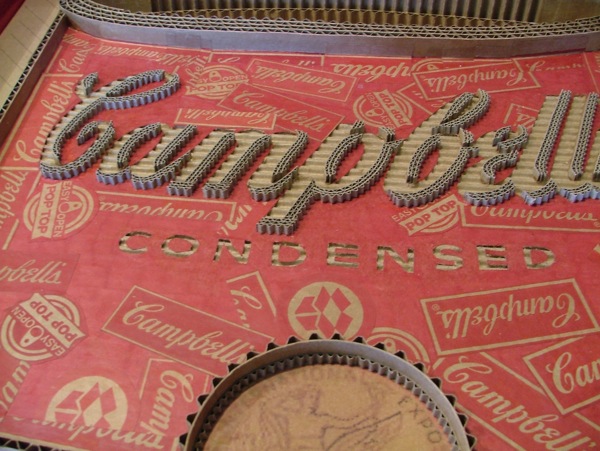 This authenticity actually made the piece particularly difficult to create, due to the fact that the weight of the cans crushed the corrugated flutes underneath them, making the material harder to work with. Mark hopes to show the piece to Campbell’s or perhaps even to the Pittsburgh Warhol Museum. In the meantime, he has been displaying it at his own shows. 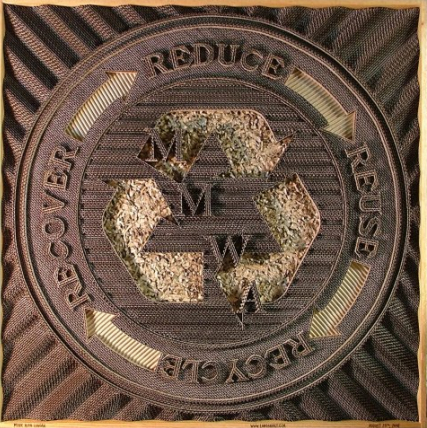 Mark emphasizes that his fine art pieces (which also include his own version of Edvard Munch’s The Scream) are not necessarily intended to be “carbon copies.” He explains: “My aim was not to rip off [the original], but more subtly pay homage to the art and artist.” Recycling certainly is a great way to do it!

While the vision of Uncle Sam calling America to action might be iconic, the above design was not a commission — instead Mark made it to be exhibited at eco-events. Using foreshortening and adding chasing arrows, the classic image is remixed and repurposed as a three-dimensional green recruiting call made out of recycled materials! As it happened, the design struck a chord; a second rendition was requested by a fan of Mark’s work and it appeared on the front cover of Consumer Trend News Green — in place of Sheryl Crow! Believe it or not, the original is now owned by none other than…

After their attention was caught by Mark’s Uncle Sam piece, Ripley Entertainment commissioned him to create their own logo in cardboard. The piece is actually made from M&M Peanut corrugated cases — and has since been praised for its technical and engineering merits. 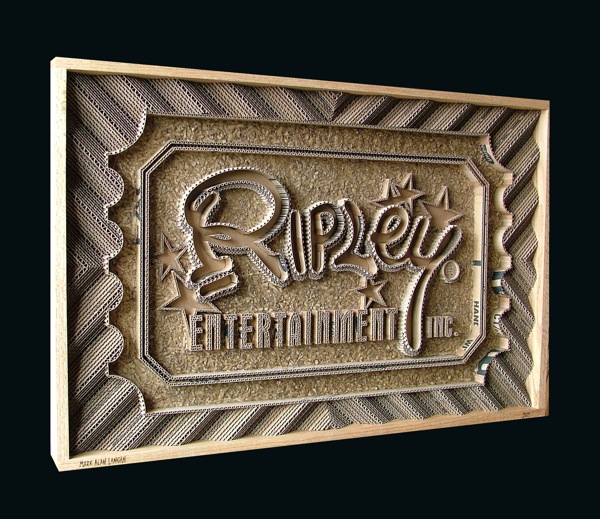 Uncle Sam can now be found in Atlantic City, NJ, while the logo is in San Francisco. It was even featured in Ripley’s latest oddities almanac! 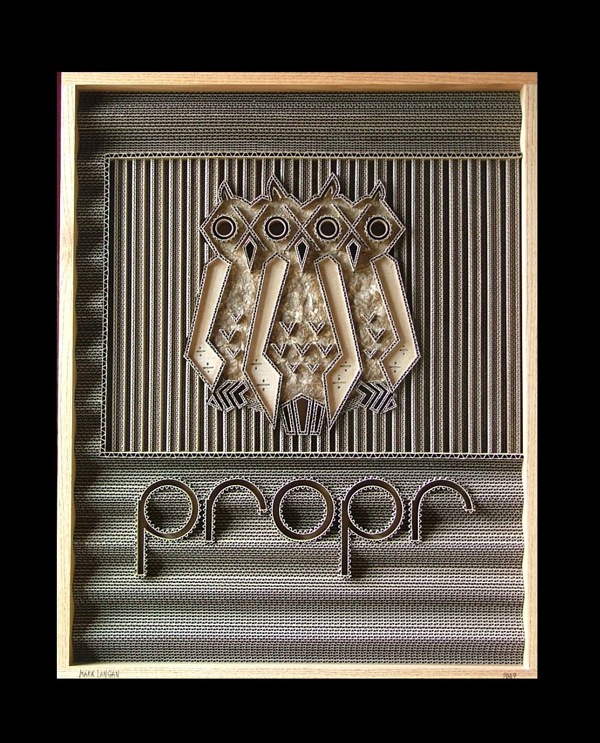 Ripley aren’t Mark’s only fans either. Out of the blue one day, he got an email from David Arquette inquiring about a commission for his company, Propr. While struggling to work out what the company did, Mark received a call from the client and discovered that he was talking to that David Arquette, aka the former Mr. Courtney Cox. Naturally, Mark was thrilled. It turned out that Propr was Arquette’s newly launched clothing line, built on sustainable and green values that perfectly sync with Mark’s artwork and world view. The three owls represent Arquette and his partners, rocker Ben Harper and former Penguin designer David Bedwell, morphing into one. The artwork has appeared in stores and in Bloomingdale’s window displays, and is one of Mark’s favorites. 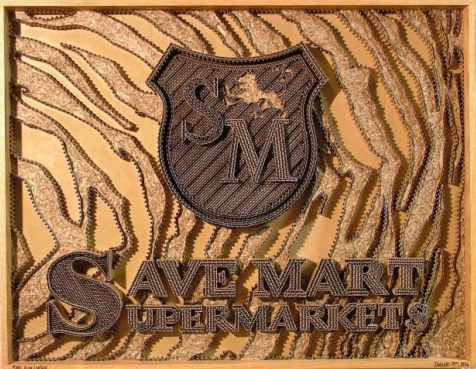 Mark admits that he’s not a truly green person, but he is passionate about the green credentials of his artwork. Indeed, he has found it to be a great medium to communicate the spirit of green living and to inspire people toward a more sustainable lifestyle, whether he is displaying his work at an art gallery or at NASA, whose America Recycles Day, held at the Glenn Research Center in Cleveland, he was asked to be part of. 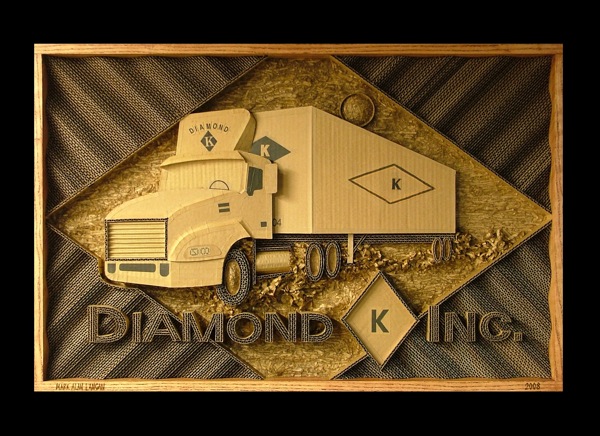 Mark describes this piece, created for Diamond K Trucking, as one of those that he has found the most difficult to complete. 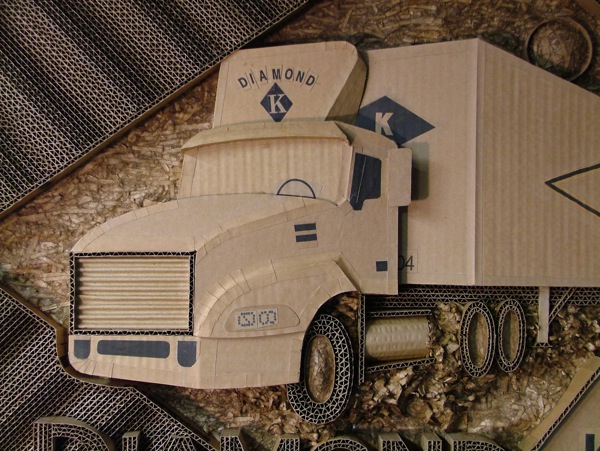 The artwork incorporates a tractor and trailer that includes minute nuances such as the tiny directional ribs of the underlying flute, establishing the image’s detail. 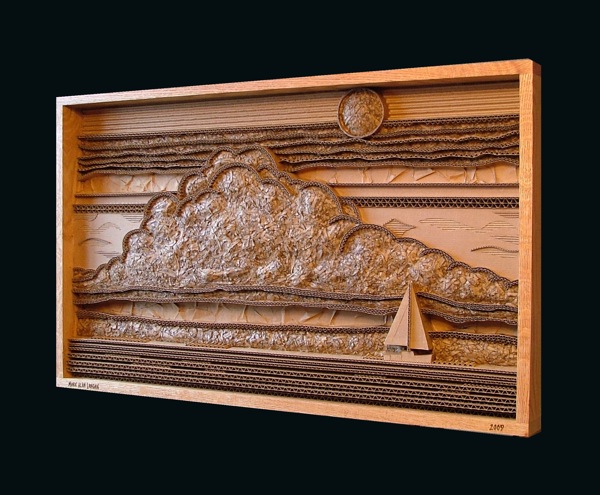 The above piece was also made for Diamond K as a gift for an employee who had been with the company for 25 years and was an avid sailor. 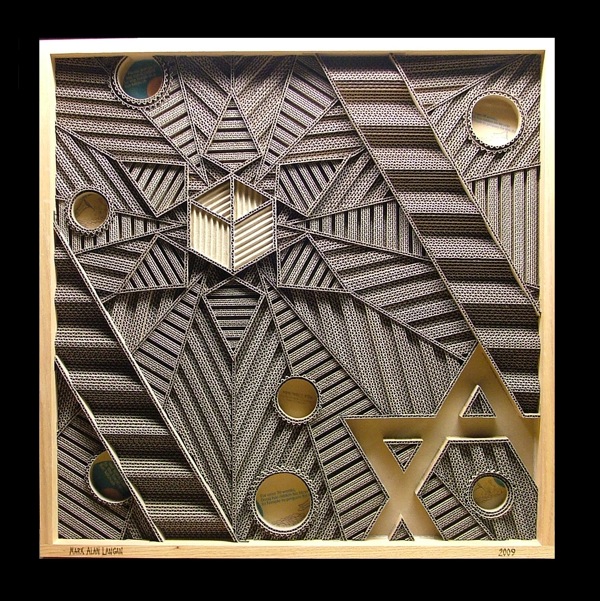 This piece was commissioned by the Cohen family, to be presented to their son on the completion of his bar mitzvah, which appropriately enough revolved around the theme of recycling, based on Old Testament teachings against wastefulness. The piece features a Star of David in the lower right corner, actually formed by the gaps between the cardboard ridges, while the parallel lines running diagonally across the piece are intended to echo the design of the Israeli flag. Meanwhile, the seven circular elements, representing the seven days of creation, are inset with paper cut (and recycled) from the bar mitzvah invitations. 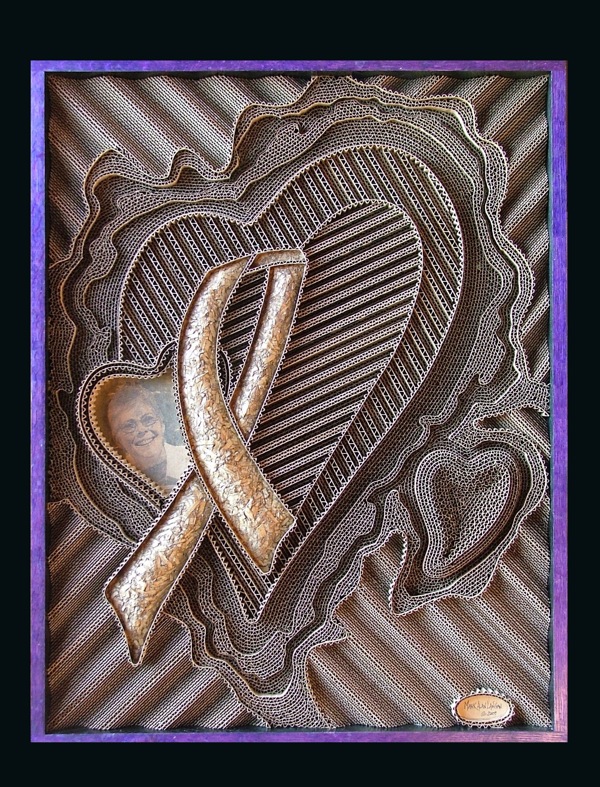 This is one of Mark’s most personal pieces, made in tribute to Julie Bernatovicz, the wife of his cousin, who died of breast cancer. His cousin, Tony, and his three children went on to become fundraisers for the hospital where Julie had been treated, the Kearney Breast Center in Vancouver, WA. Once sufficient funds had been raised, the hospital began work on a groundbreaking new facility and called upon a local gallery to provide art. It was then that the hospital got in touch with Mark, accepting his proposal to create a piece in tribute. 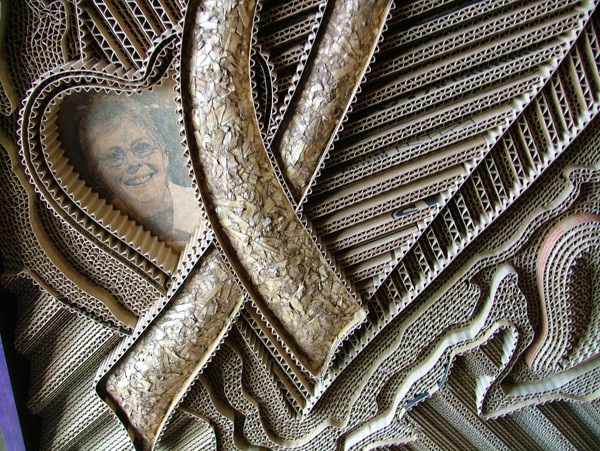 As well as including a breast cancer ribbon, the piece is themed around Julie, incorporating her photograph and a frame stained in her favorite color. Furthermore, she had told her family that after her death they would see her in the shape of hearts ± hence the central design of the piece, in which the ribbon grows into a heart shape. 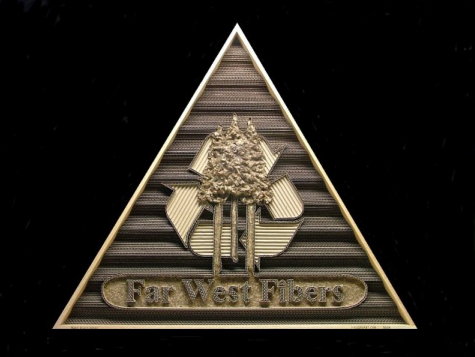 Mark rarely gets a quiet moment these days — when he’s not talking at NASA, he’s running events at the local zoo. His work is currently being considered for publication in a papercraft book, while his Campbell’s soup piece won the Juror’s Choice Award at an art show held at the Columbus Metropolitan Library in Columbus, OH. Chances are that Mark will be coming to your screens shortly! 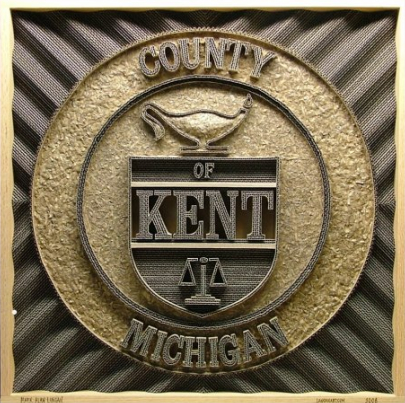 You can see more of Mark’s work on his website, LanganArt.com, or you could even commission a piece of your own! Sources: 1, 2