What Happened to the Compressed-Air Car?

In 2008, India’s largest car manufacturer announced that it would begin production of world’s first commercial vehicle to run on nothing but compressed air.

In the search for the ultimate clean car, we’ve seen concept vehicles that run on everything from solar power to algae, but most are expensive and require hard-to-find fuels. Wouldn’t it be nice to find a car that ran on something that’s plentiful and free? In 2008, India’s largest car manufacturer announced that it would begin production of world’s first commercial vehicle to run on nothing but a puff of air — compressed air, that is. The Air Car concept, developed by the French company Motor Development International (MDI) in partnership with Indian giant Tata Motors, would have used compressed air, as opposed to the gas-and-oxygen explosions of internal-combustion models, to push its engine’s pistons. The car was said to achieve speeds of up to 68 mph with a range of 125 miles between fill-ups, all for less than $13,000. The concept itself is delightful: When your vehicle gets low on fuel, you pull into a station to fill it up. But instead of stopping at the gas pump, you roll over to the customized compression unit, insert the nozzle into your tank instead of your tires, and fill up on nothing but $2 worth of clean air. Unfortunately, the dates for the Air Car’s much-publicized release in both Indian and American markets have come and gone with no word about when the vehicle might actually hit the streets. 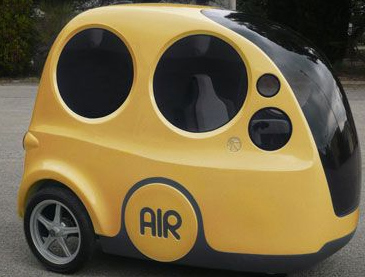 In 2009, Tata Motors’ Vice President of Engineering, S. Ravishankar admitted that the project was facing difficulties in terms of vehicle range and cooling. At that time, Ravishankar declined to say whether the company was officially calling off the project, but commented that excessively low engine temperature caused by the compressed air was a major problem. Although the Tata version of the zero-emissions car might never make it into commercial production, a more credible version is currently being developed by a duo of mechanical engineering professors in India. Bharat Raj Singh and Onkar Singh’s plans are decidedly more modest than the world domination predicted by Tata and MDI, which is why many think they have a chance of succeeding in India. According to Popular Mechanics, “The two plan to refit India’s scooters with an air-compression motor that is about three-quarters of a foot in diameter. In the engine’s schematics, a tank of compressed air fires into the chambers of a turbine whose axis is set off-center from its housing. The vanes of the turbine extend as they rotate, allowing the chambers to accommodate the volume of air as it expands and contributes to the drive.” Unlike the Air Car, the retrofitted scooters would run off the pressure it takes to fill a tire at the gas station (about 60 pounds per square inch). The Tata/MDI version had 4,350 psi in its tanks, which would require stations to install new high-tech air pumps, a difficult investment for station owners in a developing country like India. Although Singh and Singh are hoping to eventually solve engineering problems related to torque and range for their scooters (which currently only hold enough air to travel 18 miles), it might be a while until they can really solve the emissions problem. It’s important to remember that while vehicles running on only compressed air might seem like an environmental miracle, they still have a carbon footprint. “Companies manufacturing air vehicles usually fail to consider that the energy needed to compress the air into their tanks comes from the electrical grid,” Lee Schipper, a project scientist at the University of California – Berkeley, told Popular Mechanics. In a country like India, which relies heavily on dirty coal-fired power plants, the use of thousands of compressed air vehicles would actually increase the total emissions sent into the atmosphere. For now, consumers wanting a clean, efficient vehicle might be well advised to consider the many electric-powered cars and bikes already available on the market.