What better way to recycle and reuse a household item than by making it a new home for your old USB flash drive? Here are 10 of the most creative USB case mods out there. 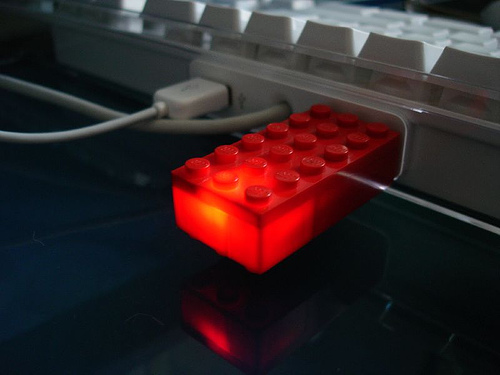 For the nimble-fingered modders of this world, the humble USB flash drive must have come as something of a revelation. Small, ubiquitous and fairly simply made, these everyday items were crying out to be modified from the start. 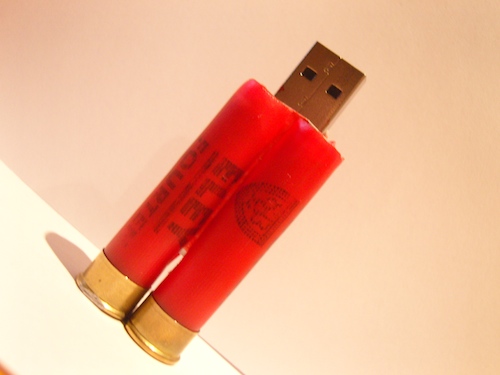 Damaged casing might see some folks throw their USB device away — anathema to the serious technological tinkerer, who sees only opportunity. Of course, adding a swank new outfit to a naked circuit board also allows you to reuse something else — and what creativity! Here are 10 incredible USB flash drive mods made using recycled items, plus a few tips on how to build them yourself. 10. Teddy bear embedded USB mod 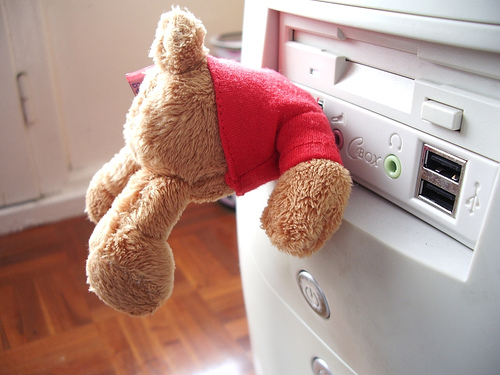 If cuddly teddy bears are your thing, then this next USB mod may just be the cutest thing since, er, Care Bears? Modding maestro Sergio de Ana gives the story on how he made some changes to a boring old USB flash drive to create something original — and huggable — for his girlfriend. 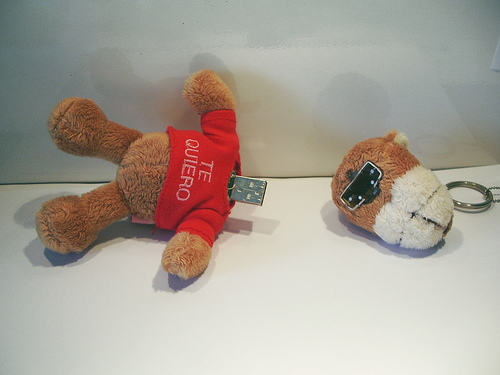 His lady had just switched over to a 1GB USB flash drive, so as to give a new lease of life to her old 256MB hard drive, and Sergio thought something along the lines of: “What do girls love even more than imaginative modders? Cuddly toys, of course!” 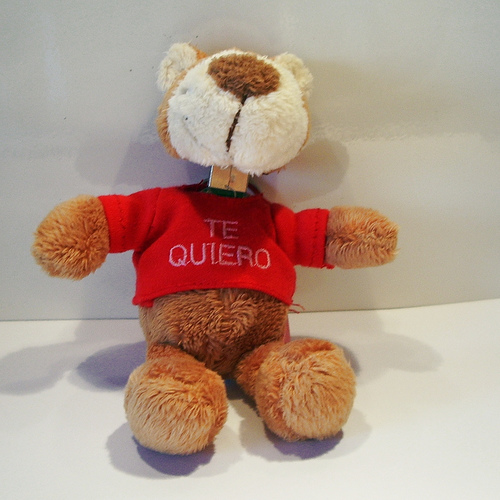 The old USB was somewhat large, so Sergio found a stuffed animal of a suitable size: “And with a little skill and patience, I got this,” he says. His girlfriend loved it, and she wasn’t alone, as dozens of websites around the world have posted or linked to it. “You enjoy it,” says Sergio. Gracias, hombre! We will. 9. Toy Beetle USB case mod 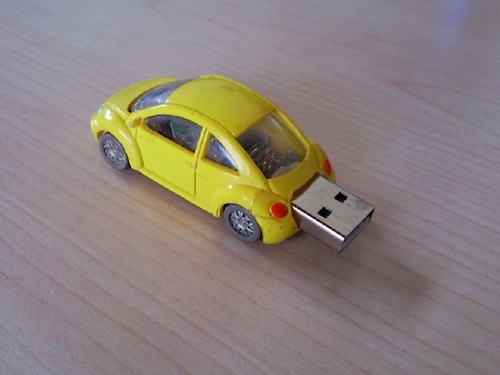 We got the modding love bug the moment we laid eyes on this awesome little USB — much as a car named Herbie charmed people despite its beaten-up appearance, and as did a robot named Bumblebee back when the Transformers were epic cartoon heroes without car sponsorship deals. 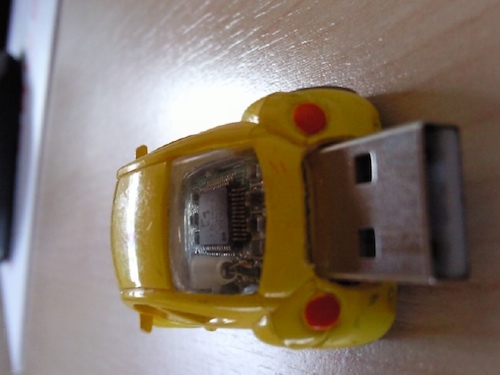 If you’re revved up to make a mod like this, open up your miniature car and clunking old USB stick with a screwdriver, then use an X-Acto knife to cut away the car interior and make a snug fit for your USB. Seal it up again, maybe with a bit of glue, and see your flash drive with an awesome new chassis, transformed into a toy. 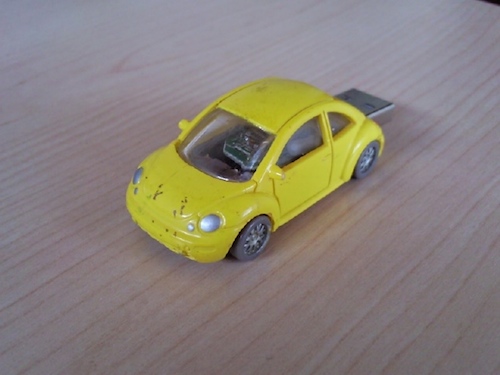 This Beetle’s designer, Dutch school student Menno Wetzels, told us: “The idea for a toy car came from my dad, who loves Beetles (we had about seven fully functional ones). And I had a USB flash drive… the casing [of which] was broken. I then took one of the many Beetle toy cars we have and modified it into a new casing.” Nice work, Menno. A bug to go bananas about. 8. Chewing gum packet USB case mod 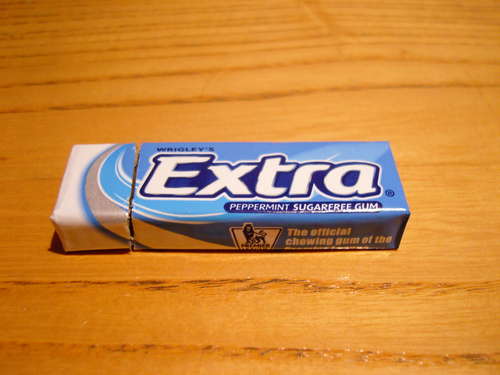 While we were chewing over which entry to include next in this list, we stumbled upon this awesome little USB flash drive — but at least it didn’t stick to our shoes like thrown-away gum on the street! 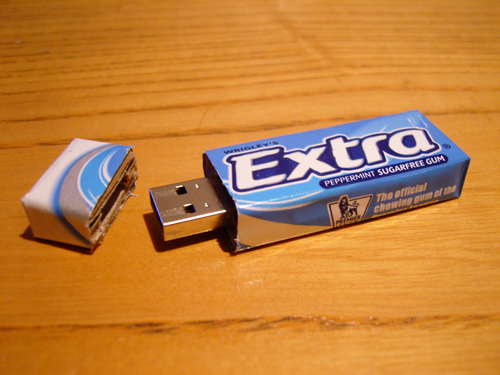 According to its maker, =SMART=, “This case mod allows you to sneakily conceal your USB in a chewing gum packet, [and] apart from being super-mega-awesome-cool, will stop all those annoying classmates who always borrow your USB (you know, the ones that don’t delete their files afterward). When they ask, simply reach into [the] packet and retrieve your ‘chewing gum’!” 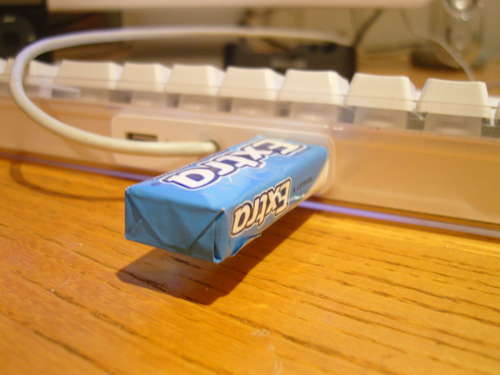 Maybe your dead USB device has already lost its plastic coffin, or maybe you’ll have to pop it open with a craft knife. Either way, you’ll need a carefully cut open rather than torn packet of chewing gum (duh!) to bring it back to life and you will need to cut some cardboard to size. 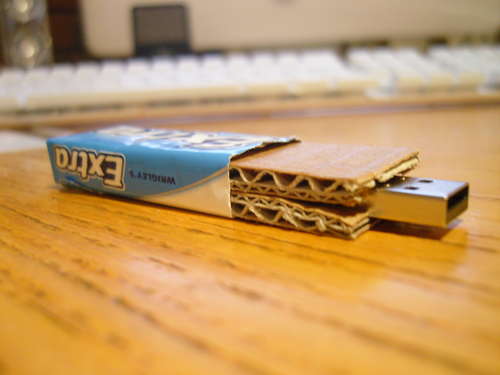 The USB device fits in a hole hollowed out of a cardboard strip with another glued on top, and if all is measured well it should slot nicely into the empty packaging. Use some glue to stop the packet sliding off and you’re done. And all in 10 minutes! Who knew gum could be such fun? 7. Zippo lighter USB thumb drive mod 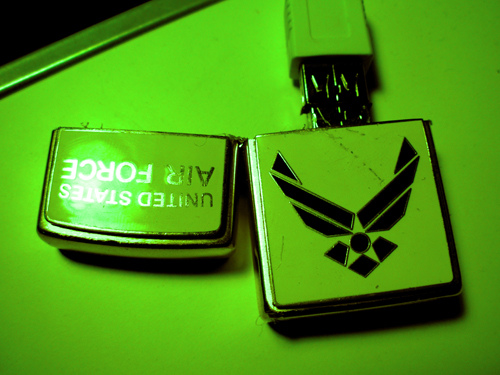 “Tired of that boring-looking USB thumb drive?” asks trailblazing tinkerer Kevin Saw. “Spice it up with this Zippo lighter mod!” If you’ve got the spark up to make this inspired USB mod, it’s easy. First, you take the small printed circuit board from inside your old thumb drive; maybe it got crushed or snapped. Then pull the fuel and ignition box out of an old Zippo casing (you can save them if they’re not damaged) and replace with the circuit board, which you can fix in place with hot glue. 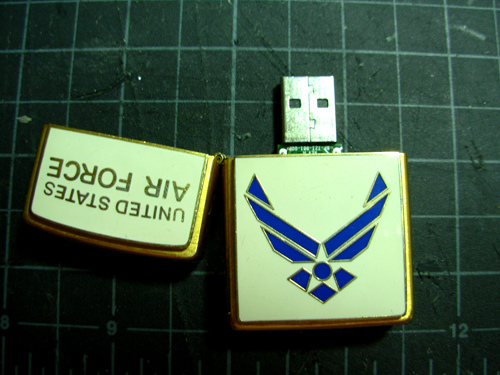 Lastly, glue two strong magnets inside the lighter casing to keep the contraption snapped shut so dust won’t get inside. And don’t worry, because magnets won’t damage a flash memory device like they will a hard drive. That’s it. You’re done. One awesome pocket-sized USB mod. James Dean would’ve been proud. 6. Tennis ball USB mod 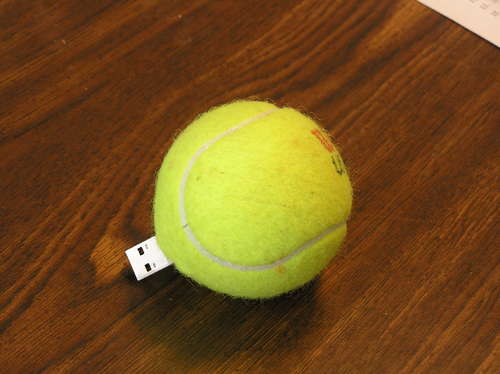 If you’re a game-set-and-match type of guy or gal, you’ll simply love this next mod, which houses your indispensable data storage device in the case of an old tennis ball. Its maker, Fwjs28, came up with this design for his bare old USB drive he had when he was bored one night: 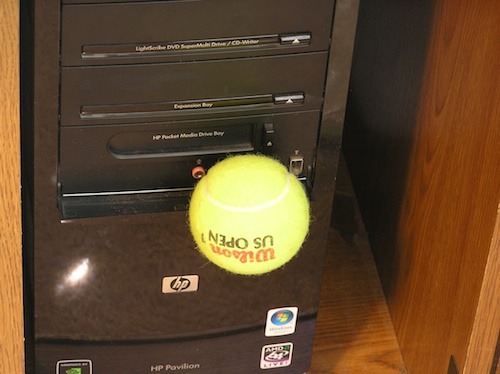 “I took a pocket knife and stabbed the ball (be careful… this can be tricky) then carefully slid the USB stick into the hole. Don’t make the cut any thicker than need be, but make sure you have enough width. I took the case off, but you might not have to. This is a pretty cool idea.” Sure is. And if the tennis ball’s weight doesn’t put too much strain on the port, as one commenter speculated, it’s hard to call a fault about this idea. Plus, the bounciness is sure to give your USB lots of protection. Ace! 5. Travel-size toothpaste USB mod 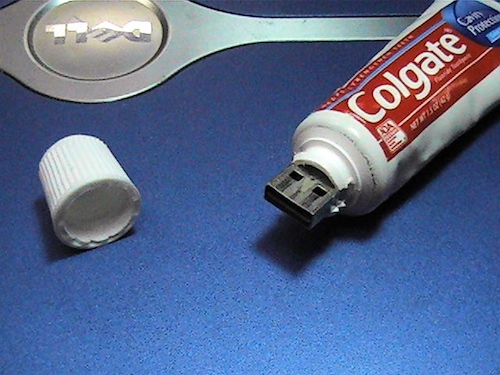 After being asked by his ex-wife to repair the USB connector for her flash drive, modder Ryan97128 decided to have a little fun and rehouse it in something fresh: “I searched the house looking for something to put it in,” he says. “I almost went to the store to pick up a pink eraser. Then I found this travel-size toothpaste. It only had enough toothpaste for one or two more brushings. I confess that my original purpose was aesthetic humor. However, my second thought was that I could keep this soon-to-be-discarded vessel away from the landfill.” 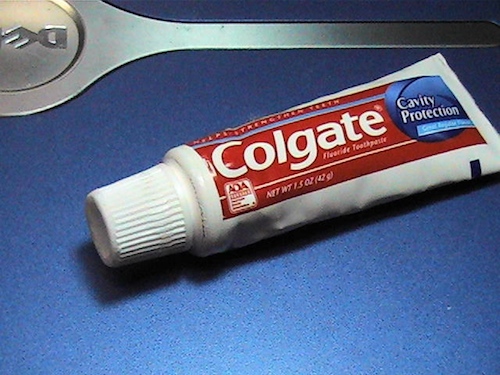 Good thinking, Ryan. “Start by brushing your teeth with any remaining toothpaste,” he begins his tutorial. Then it’s all about cutting open the sealed bottom of the tube, cleaning out any residual toothpaste, and lining up your circuit board with the threaded end so you can remove a big enough groove. Once you’ve put the USB in place, pack stuffing around it, glue up the bottom, and replace the slightly modified cap. “Plug it into the computer and admire your work,” concludes Ryan. And, “Give your cool creation back to its owner.” 4. Wine cork USB key mod 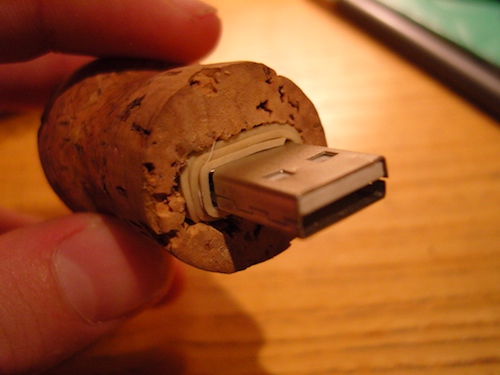 Although wine corks are gradually being replaced by screw tops and synthetic alternatives, you must have wondered at one stage about ways to creatively recycle all the corks you’ve collected from popping open bottles of plonk. Well, here’s one idea to get you thirsty: a custom wine cork USB drive. 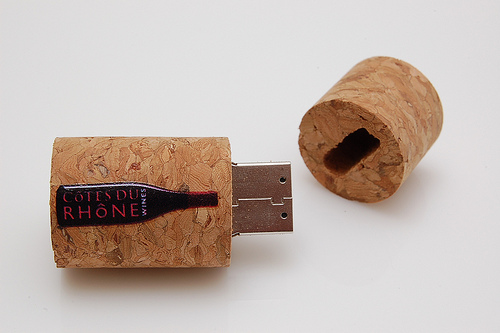 Similar designs have been marketed all over, but you can see why they’re so popular. And with a utility knife, a small USB device, a cork stopper and a splash of dexterity, you can make one, too. Our friend =SMART= decided to go all chic and make a champagne design. After splitting his USB along its seam and taking the circuit board out of its shell, he taped it up to shield it from shavings, carved a marked-out hole in the the bottom of the cork, and slotted in the USB. Cheers! 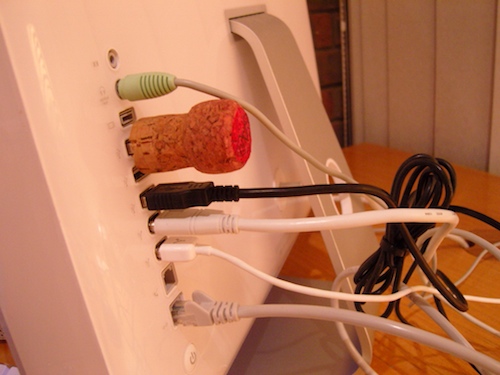 Why not tuck into a box of pinot noir and get practicing. Keep to one glass if you’re going to have a serious go at it, though. Got to be careful with those fingers! 3. Lego brick USB case mod 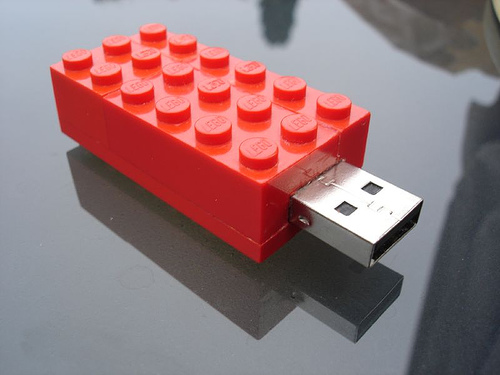 Legos are possibly the coolest and most creative toys out there for little and grown-up kids alike, but there’s always a spare brick or two lying around, so here’s a great way to reuse them to build something different: a new home for your old USB device. 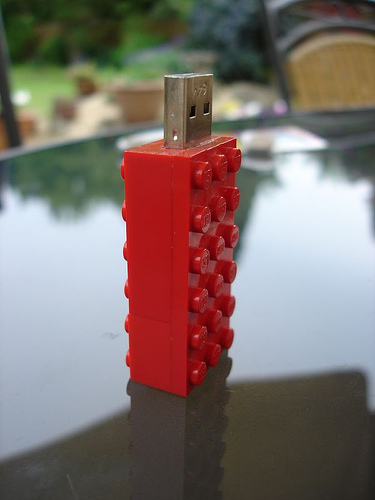 Slice off the bottom of a standard 4 x 2 Lego brick, then cut and ply out the insides. If you want the challenge of housing a bigger memory device, like modder Ian Hampton did, you can also chop the brick up and stick it together with others using some super glue and “a steady hand.”

Cut a groove in which to fit your USB stick into its new case, secure the USB with a brick off-cut and some silicone, seal it up, polish and bingo! — it’s built. It even glows red when you plug it into your computer. Awesomeness all around! There are dozens of variations on this using different bricks, too. 2. Modified Rubik’s Cube USB flash drive 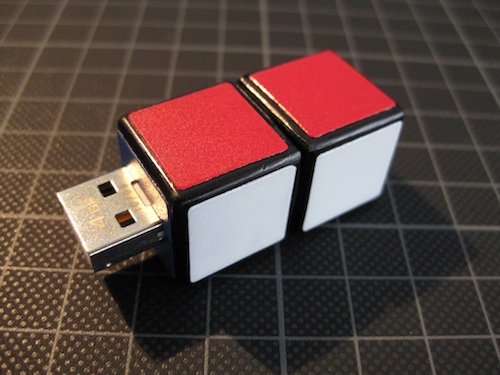 As well as one of the most epic USB mods you’ll ever see, this brainteaser is also that rare thing: a Rubik’s Cube you can solve! Just kidding — there are only two pieces — but making it is still darn tricky. 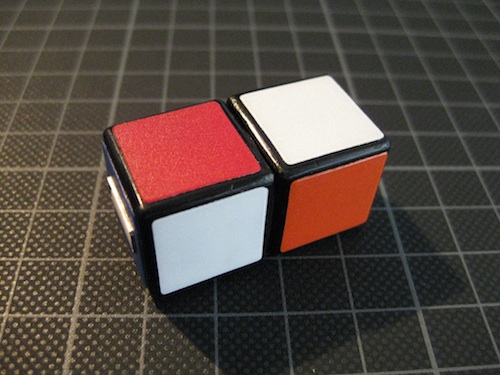 To work the puzzle, you’ll need to carefully cut a super small USB Nano flash drive from its casing, strip out most of the edge and corner pieces of an old Rubik’s Cube, saw off the non-sliding bits of a used lip balm stick and have the patience of a Buddhist monk! But, if you can pass the test of modding the flash drive with the help of some clay, a washer and screw, you may just make all the pieces together fit, and have a flashy new USB that smoothly swivels up and down inside the cubes. 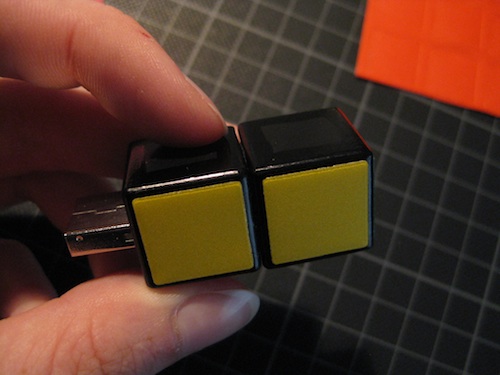 After some finishing touches — and one or two re-assemblies — you’re done. Phew! We wouldn’t even want to attempt to follow this masterclass. Solving a Rubik’s Cube sounds far easier! Kudos to pro modding magician BrittLiv, whose tutorial you can check out over at Instructables. 1. Shotgun shell USB case mod 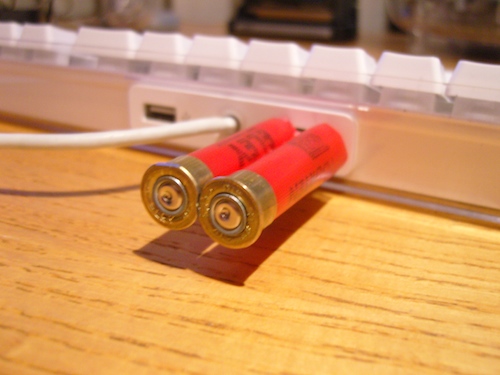 We’ve featured incredible new uses for old shotgun shells on 1-800-RECYCLING before, but if we’d known about this rad mod we’d definitely have included it. It doesn’t even take long to make! 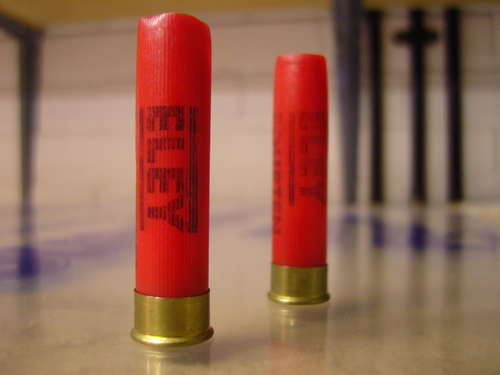 After prying open the casing of a small, worn-out USB case (you can recycle the plastic), cover the naked circuit board with some electrical tape, stand two shotgun shells close together with the help of a file, mark out and cut slots in their sides so the USB fits in, and pad the USB with some sponge, which you’ll then paper over and color in red pen so it blends in nicely. 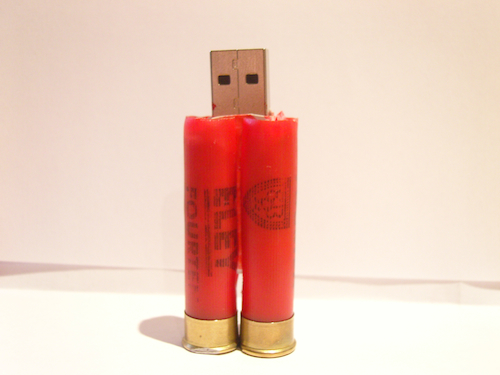 Boom! You’re done. What could be cooler than loading your computer up with some 12-gauge ammunition? As sharp-shooting modder =SMART= says, all that’s left is to “show off your awesome mod to your friends — and gun totin’ uncles.” Varmints beware! Special thanks to all the modders who allowed their projects to appear in this article and whose detailed instructions you can follow through their links.