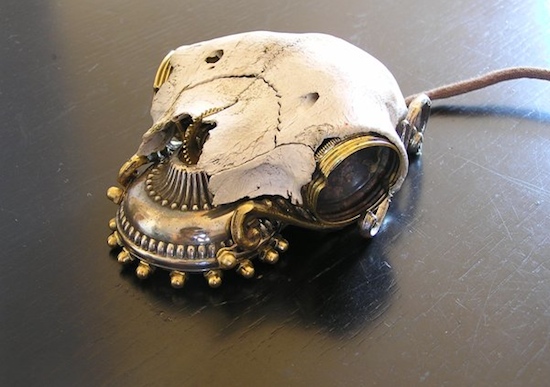 Image: Ivan Mavrovic All images courtesy of the artists and used with permission.

As regular readers of 1-800-RECYCLING.com may know by now, “steampunk” refers to the futuristic reimagining of Victorian esthetics, conjuring up a world filled to the brim with characters like Frankenstein and Dr. Jekyll and Mr. Hyde, in which behind every bookcase there is a hidden room. 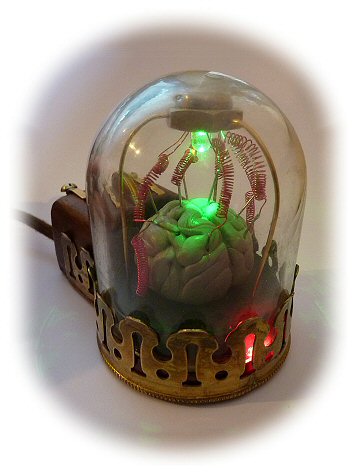 The charm of steampunk workmanship lies in its amalgamation of different component parts, creating a cornucopia of mechanical, almost clockwork pieces. This careful throwing together of elements obviously lends itself well to recycling and the reuse of parts, which is how these spellbinding computer mice were constructed. 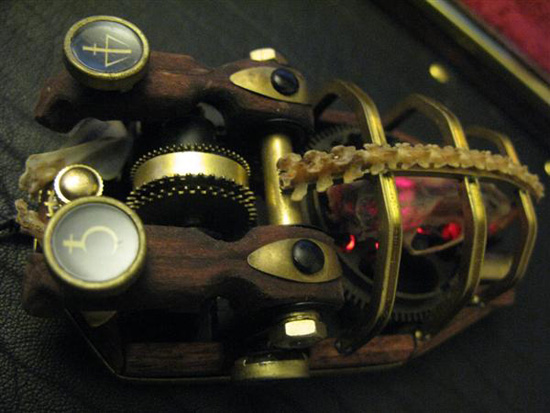 So, join us as we trawl through cobwebbed cabinets and drawers to discover and dust off the best in steampunk computer mice made using recycled materials. Retro-futurism couldn’t get much more stylish! 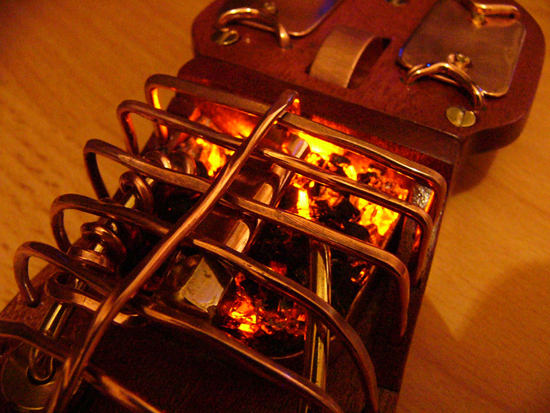 Unklian was inspired to make his furnace mouse after seeing similar items online. There are brilliant opportunities whilst making steampunk appliances to reuse unwanted items within the home, as well as junk that you can find outside. The antique appearance of this mouse was created by housing an optical mouse within mahogany and copper, much of which can be found and reused; for example, Unklian used copper from old heating pipes that he had spare. The “coal” for the furnace was created simply by picking up some pieces of a smashed windscreen that were found on the street. 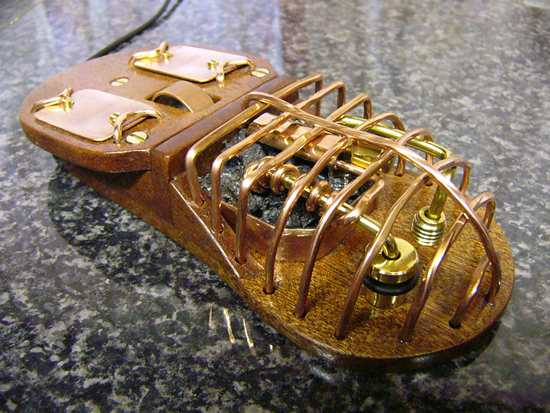 The manufacture of mice such as these involves technological know-how on two levels. To create the illusion of a burning furnace, an orange LED was used. The esthetics are even more impressive when you consider that this is an actual working computer mouse, manufactured from a deconstructed optical mouse bought on eBay for one penny. 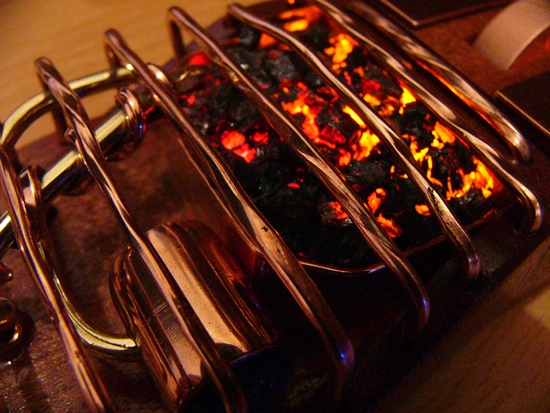 The trick with Unklian’s mouse is therefore not expensive components, but care and attention during its creation. By taking unwanted junk (including brass from a scrap merchant) and putting it together whilst sticking resolutely to the the theme of the furnace, a truly evocative piece has been created. 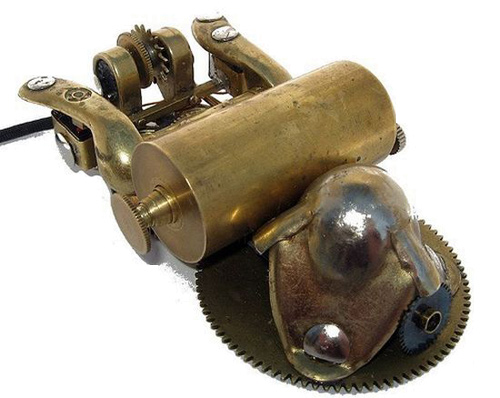 Jake Hildebrandt seems to possess both an aptitude for conceptual problem solving and a thrifty disposition. He claims he is “a pretty big fan of recycling in general, and… a good deal of the parts I used were [obtained] from the bin or near to it.” After creating a steampunk PC mod — in its whimsical imaginary back story it is his own version of Professor William C. Ravenscroft’s Telecalculograph, a bizarrely mysterious device whose functionality is kept a secret — he decided to create an accessory to go along with it. 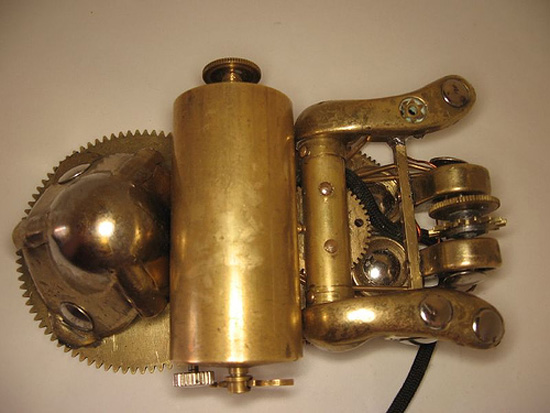 And what better accessory could there be for the Telecalculograph than The Bug, a mouse, to control it? The Bug was apparently built to accurately resemble photographs of the device Ravencroft created to control his machine (although this could easily be a prop from a futuristic metal-aliens-are-coming blockbuster!). 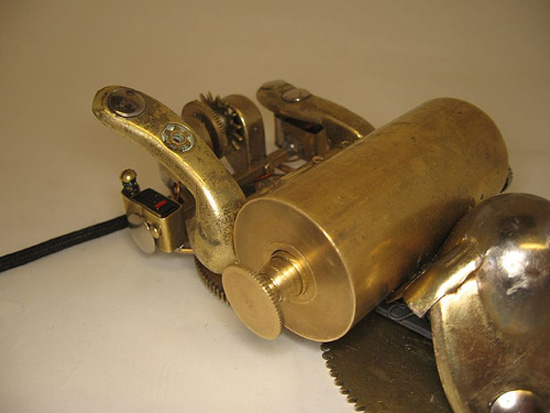 A lot of the outer casing of the mouse was created from reused scrap metal rescued from bins for the insect-like device. Obviously, the use of such a variety of scrap does make the mouse slightly heavy! 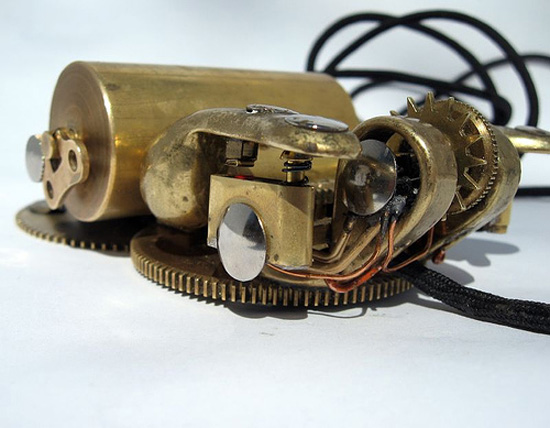 As well as using metal scraps, a variety of household goods were dissected to obtain the necessary component parts. An alarm clock was stripped of its escapement wheel to create the mouse’s scroll wheel, for example. All in, the mouse cost just $5 to make, which certainly makes a case for the reuse of some otherwise defunct items.

8. The Paradox Mouse by Daniel Pon aka Paradox 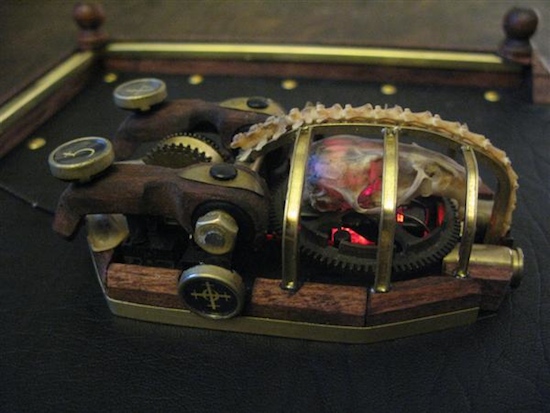 Daniel Pon seems to have really gone to town on playing with the idea, “this is a mouse; rodents are mice,” and has therefore created a “mouse” with actual bits of mouse skeleton attached! 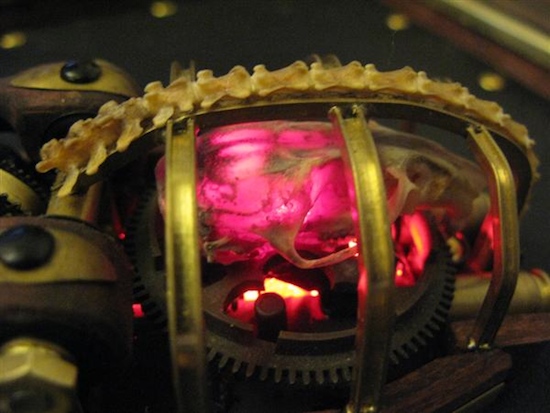 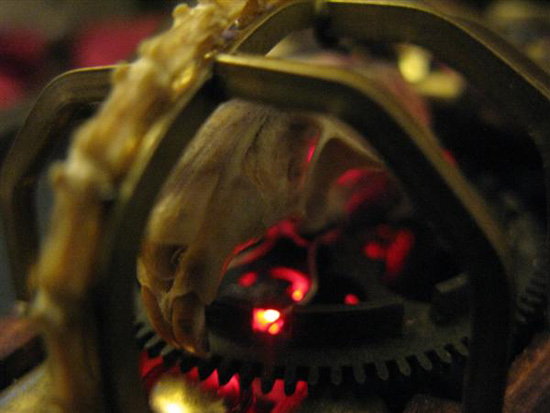 These are used for decoration rather than functionality, and although a bit morbid, perhaps this is a theme that could be explored via something less… dead. Toy mice perhaps. It would be pretty surprising if anybody actually kept dead animals around for recycling purposes. 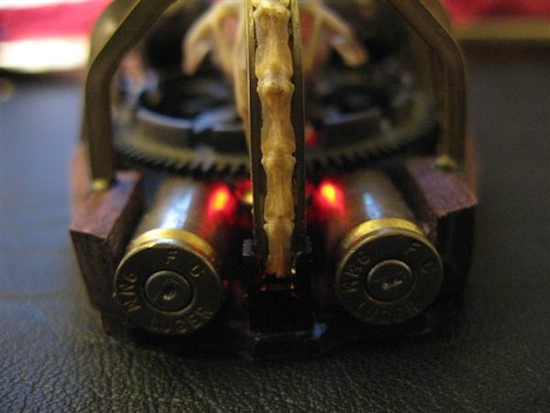 Pon may be an exception; to his credit, from a recycling perspective, he says, “All the parts I used were found in my house” — including an explosively cool addition in the shape of some old 9-mm bullet shells! 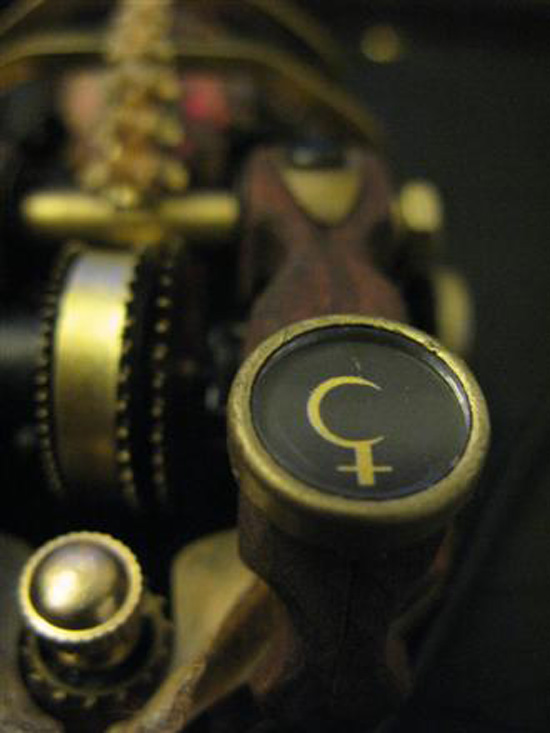 Pon has also attached old typewriter keys to give the mouse an old-fashioned appeal, creating an object worthy of adorning any Victorian gentleman’s desk. Scouring your attic for quirky, well-worn antiques might be an idea if you are thinking of making one of these. Perhaps you’ll even find a dead mouse up there. Win! 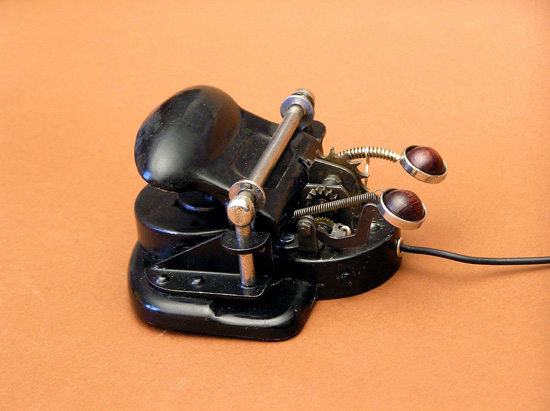 Why Ivan Mavrovic’s steampunk mouse should be associated with the KGB is a mystery, as actually it’s quite enchanting. Perhaps this mouse is trying to disguise itself as a hole punch — or more likely was manufactured from one (one destined for the trash, we hope)! However, it does showcase the tightness of design and manufacture that can be achieved via steampunk esthetics. 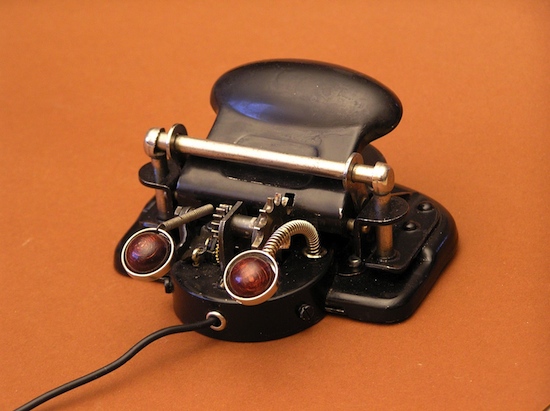 When assembling pieces such as these, the simplicity of form is very important. Mavrovic has used a lot of circular motifs in the piece that really unify it. This is something to look out for when constructing your own steampunk mice, as repeated elements can be easily found and reused (for example, in electrical equipment) and will tie a piece together.

6. Steampunk Keyboard by C4rdninj4 (aka Brad) 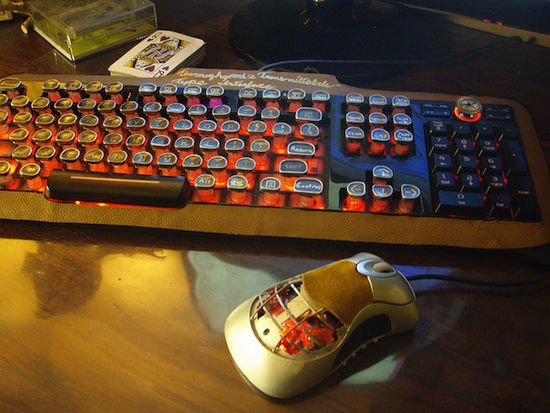 The ominous red glow coming from the center of this mouse is probably nothing to worry about, as this steampunk keyboard and mouse set has apparently not been made by the devil himself, but simply by someone who enjoys making gadgets. A similar esthetic could be achieved by recycling some old games or toys. 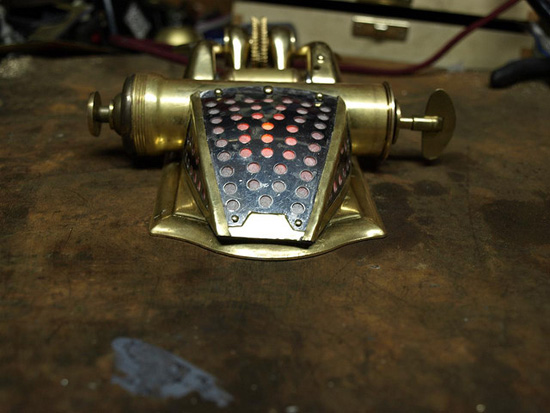 Hildebrandt’s third version of The Bug is a much lighter and much easier to use than the first. The beauty of pieces such as these is just how drastically features like LEDs can alter the appearance of the mouse. 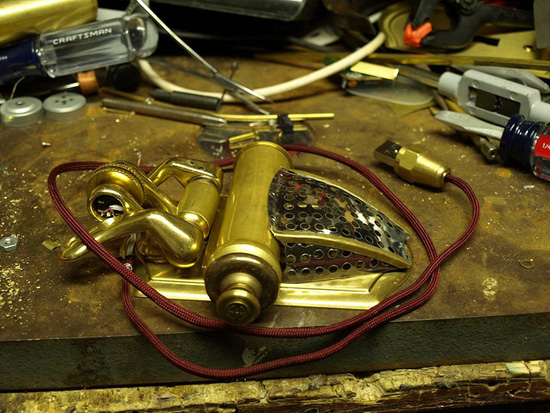 The Bug Mark III demonstrates the freedom afforded by making your own steampunk apparatus from recycled materials, as you can integrate personal details. Instead of the traditional button on a mouse scroller, Hildebrandt has added a side thumb button, which is both an esthetic and an ergonomic enhancement. 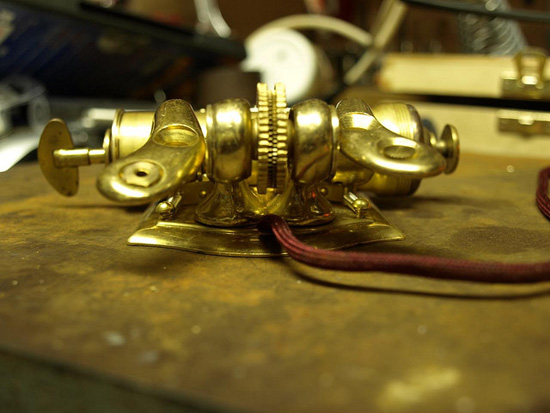 The juxtaposition of seemingly improbable parts is instrumental in the creation of a sort of fairytale sensibility. A winding key is plugged into the LEDs, turning slowly when you move the mouse, as if it is using up its power. These elements — for example, the winding key — can be found on ornamentation around the house, offering the perfect opportunity to get rid of something you don’t like, and create something you do.

4. Steampunk Mouse by The Boiler Room 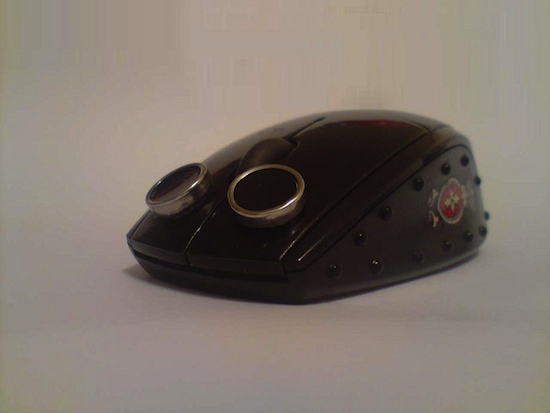 This rather simple mouse has been steampunked using two old royal typewriter keys at the front, cabochons applied to the side to create the riveted boiler effect, a lick of black paint and polish and what appears to be some kind of heraldic design. It looks a bit like something someone would make if they wanted to enter a chess version of the long-defunct TV series Robot Wars: a bit menacing, but full of recycled goodness! 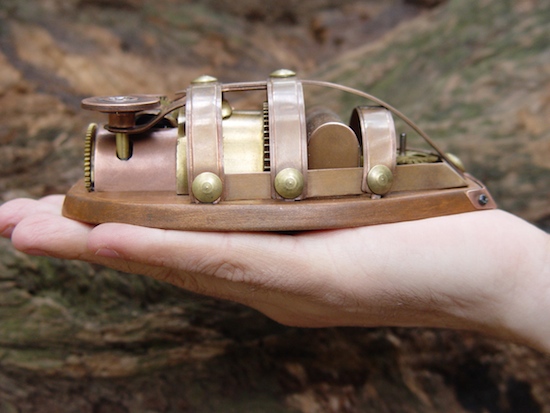 Alex Neretin has constructed his elegant steampunk mouse from brass tubes, watch gears, copper and wood. The beauty of the walnut, contrasting against the mechanical inner workings of the mouse make this a truly stunning object. 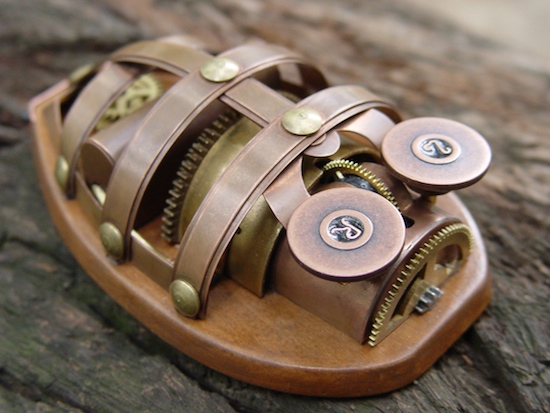 The use of old mechanical equipment, like watches, gives the impression that the mouse might make a satisfying ticking noise as its cogs turn in response to your clicks. It adds a bit of romance to the whole admin affair! 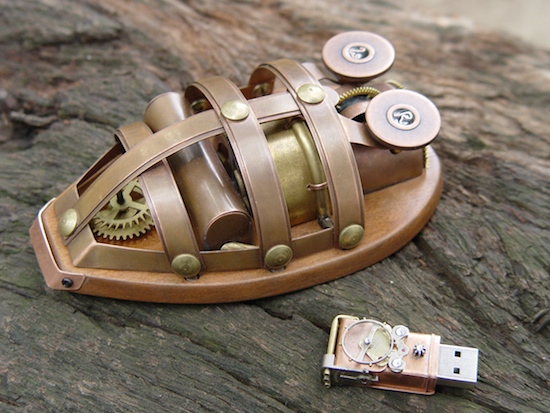 As an added extra, Neretin has also made a USB flash drive with some elements evocative of compasses and scientific gadgetry. The romanticizing of data storage is definitely a winner, especially when it looks this good! 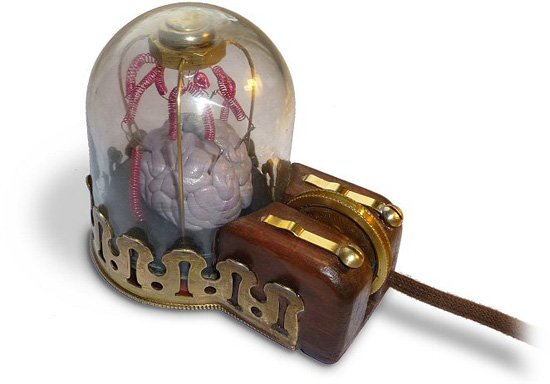 If the kids are getting older and leaving behind well-loved toys, these can always be recycled into novelty steampunk objects. Peter Balch’s brain in a jar plays on the Victorian esthetics common in steampunk, but in a lighthearted way. 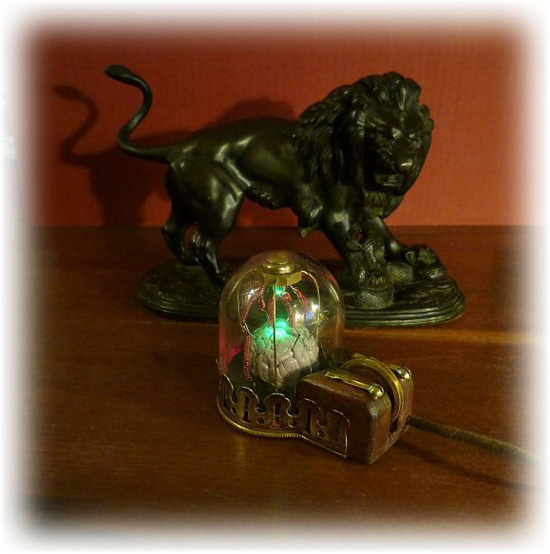 The wheel at the back is made from a two-pence piece encased in a ring from a light fitting, while the “fake oil lamp [was] found in a car-boot sale.” The materials used therefore don’t have to cost a great deal to still look effective. This creation by Balch, a steampunker who confesses to having been inspired by similar creations seen on the Web, is positively Frankensteinian!

1. ‘Bright Side of Death’ Sheep Skull Mouse by Ivan Mavrovic 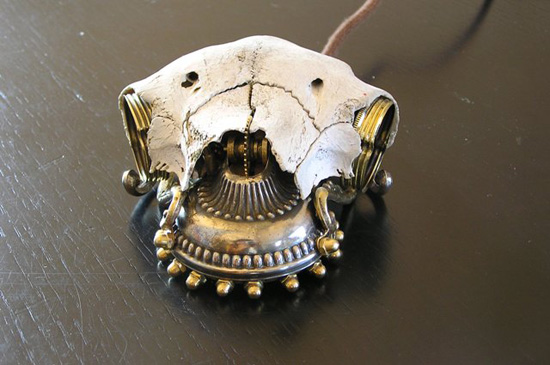 Ivan Mavrovic’s showstopping piece, The Bright Side of Death, is perhaps not something that can be easily reconstructed at home. However, the ability to form a working mouse with metallic elements as well as a sheep’s skull, while maintaining a romantic beauty, is definitely something to be applauded. 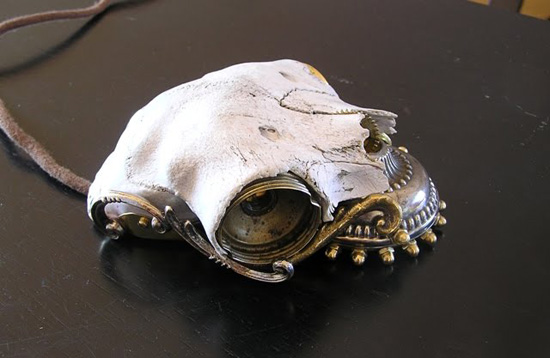 The sheep’s head itself forms the basis of the piece, whilst the other elements have been slotted underneath for functionality, giving the impression that it is a piece of equipment owned by a mad scientist. The fixtures look like the sort of battered, old instruments usually available in yard sales, giving the mouse a charming as well as macabre look — not to mention serving as a a fun way of recycling something no longer fit for purpose. 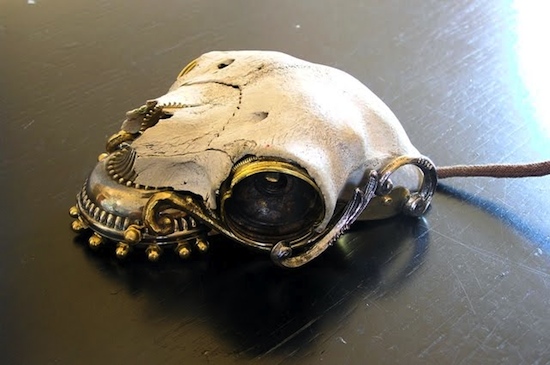 You can see some of Ivan’s incredible steampunk cell phones here. Now get creating!