Can light bulbs be anything but functional glass baubles? These artists prove that bulbs have a secret life that only green-fingered repurposing can shine a light on!

Nothing captures a “Eureka!” moment quite like the proverbial light bulb going off over someone’s head. It’s an apt image of inspiration when considering the work of the following artists. 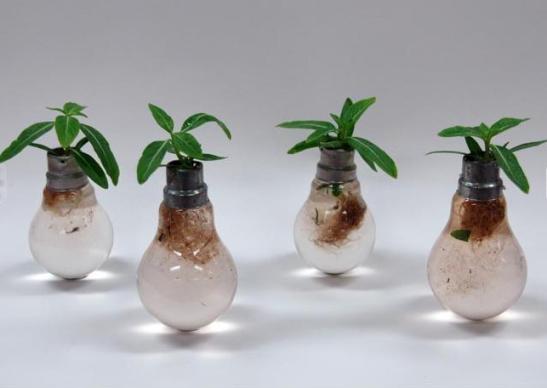 All images used with permission of the artists.

With amazing creativity and a sense for blending the organic with the inorganic, these creative hands have recycled and repurposed everyday light bulbs, allowing the little glass globes to be reborn as functional and beautiful flower pots and mini-terrariums! We were impressed! Or should we say enlightened? 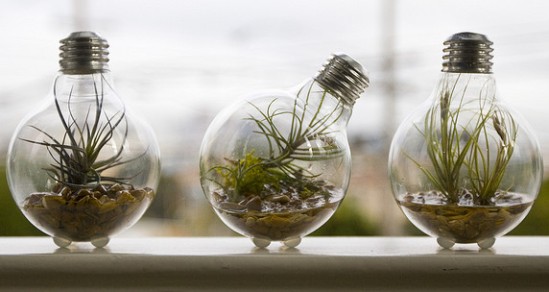 If you embark on a light bulb planter or terrarium project, you’ll need to make sure that you keep your plants watered once you’re done. Depending on the type of plants and arrangement you have, you may need to water them anywhere between once a week and just once a month. The condensation you’ll see in the bulb is normal — after all, we’re talking about living, breathing organisms here. 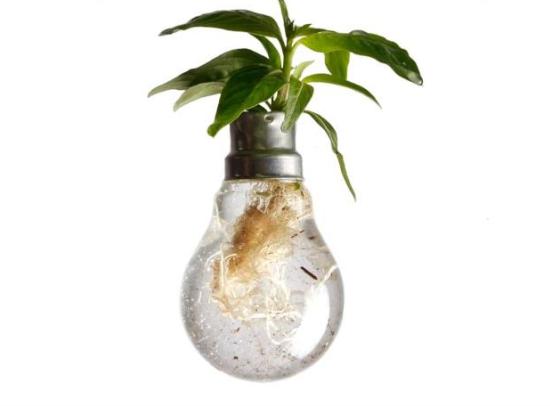 Want to learn how to hollow out a light bulb and remove the white coating it may have? You can read a tutorial here. But now on to some truly inspiring creations! 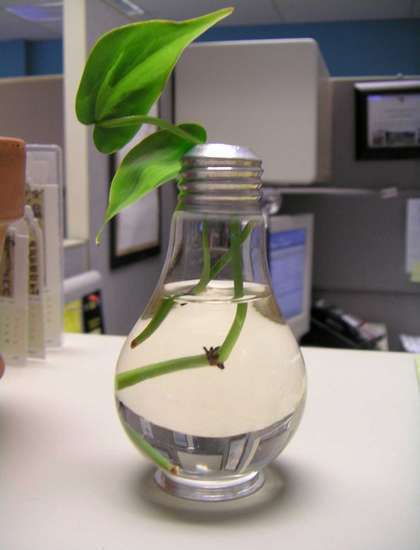 This stylish light bulb vase was created by Alejandro, aka arte.sano. The aluminum ring supporting the bulb was salvaged from an old hard drive, while the stand seen in the next picture was once an IKEA paper lamp frame. 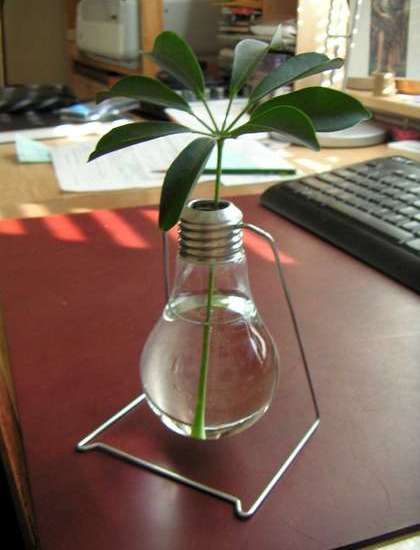 Alejandro bent little hooks at the ends of the wire to hold the bulb through the holes in the fitting. You’ll have to be careful not to break the glass while doing this. And make sure to change this bulb vase’s water frequently because it’s tiny! 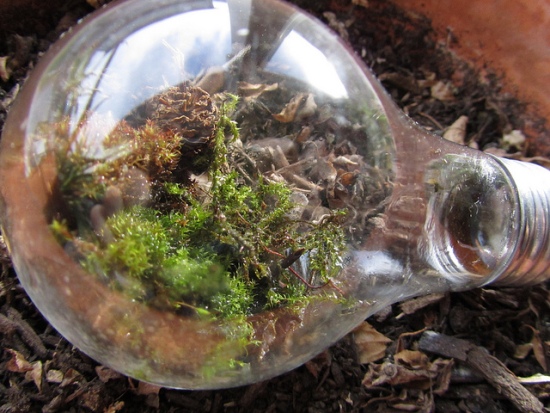 This tiny light bulb terrarium would be perfect if you got the urge to draw a still life that combines organic matter, metal and glass, as the different elements are blended together perfectly. 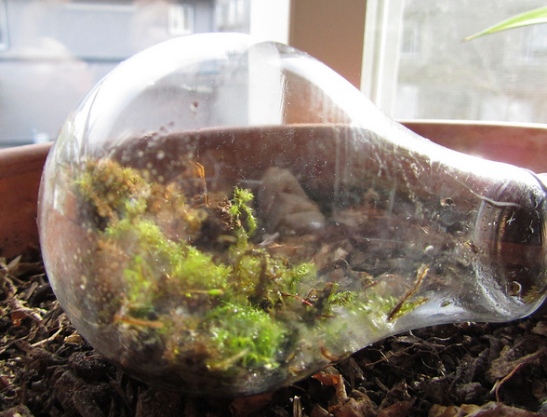 The fact that the bulb rests on an actual flower pot filled with soil and wood chips makes this creation look like a fantasy world nestled in the real world. Beautiful repurposing of an old light bulb!

8. Light bulb to the rescue 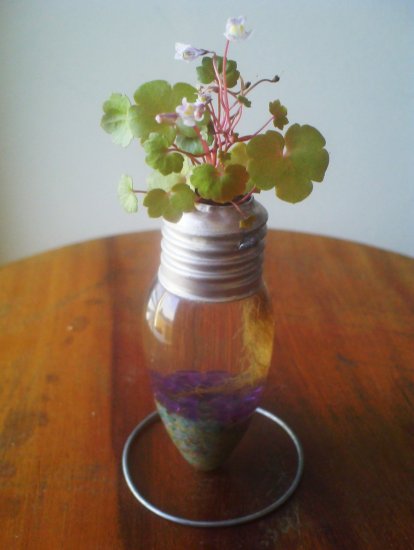 DeviantART artist Rodrigo Nassinger, aka Kosmu, created this vase for a plant using a light bulb that he rescued from the sidewalk. Instead of getting trodden on and smashed, the Slimline bulb was given a new lease of life, while allowing life to take hold within it. Kosmu placed the plant in the bulb vase, watered it and then forgot about it for a while. When he looked at it again, the plant had expanded considerably, grown roots and even developed small, whitish flowers. Aw, we love happy endings! 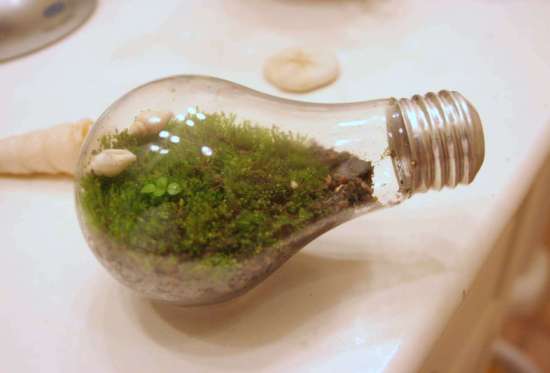 Because of the humid conditions that can be created inside them, light bulbs are perfect for tiny but perfectly formed terrariums, especially ones for growing moss. Here’s another creation by Alejandro/arte.sano (see entry 10) who, apart from reusing an old light bulb, also used moss from his back yard. Talk about an economical yet stylish do-it-yourself project! 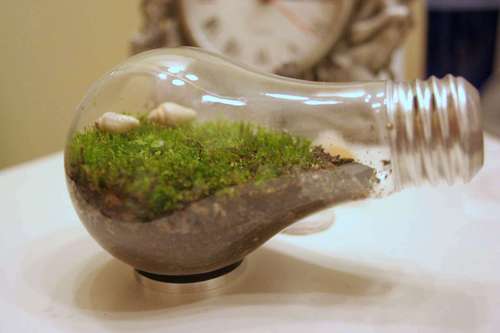 In this image, you can see the even distribution of soil versus moss — and don’t forget the shells, which add a nice touch. Alejandro’s advice: “To put the moss inside the bulb, split little pieces of the the moss ‘carpet,’ small enough to fit the opening. I used a pair of tweezers and also chopsticks to set the pieces in place.” Good idea! You heard it here from an expert! 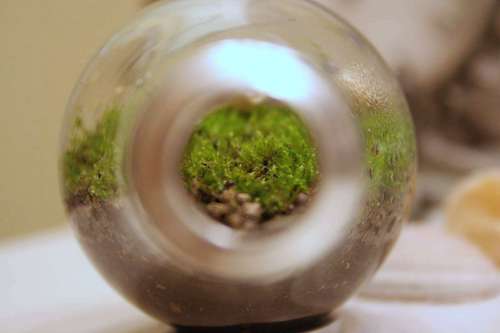 Even the metal ring that the mini-terrarium rests on is recycled; like the vase we saw above, it came from a discarded hard drive. The ring prevents the terrarium from rolling away and lets you change its position — from on its side to upright. Nice touch! 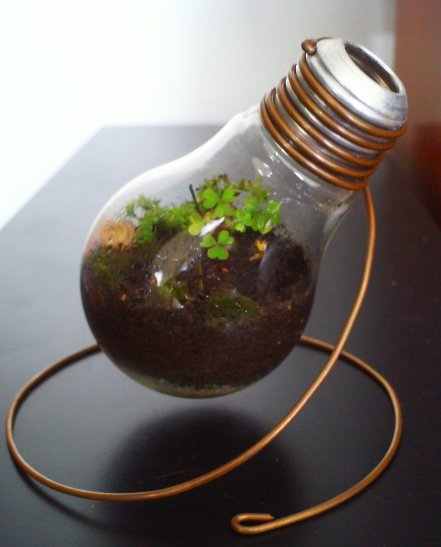 What caught our eye about this light bulb planter (another from Rodrigo Nassinger; see entry 9) is the cool stand made from a piece of old copper wire. Simply twist it with a bit of skill and voilà, there’s a stylish holder for your light bulb plant pot. Here’s a close-up — and don’t miss the snail shell! 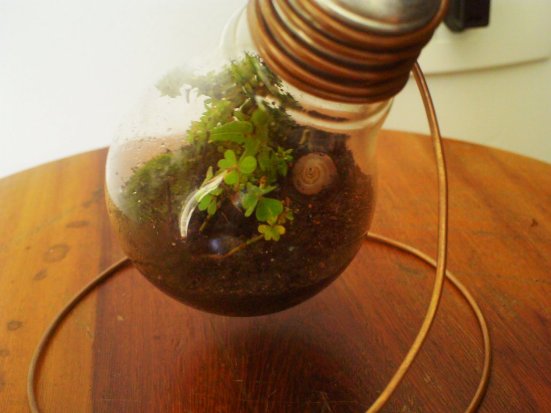 Rodrigo’s advice on how to fill the bulb? “[P]ut a layer of quartz sand in it (you can use gravel or pebbles) to keep the moisture, [and] upon it a layer of activated carbon — that absorbs impurities and prevents mildew. And finally, a thicker layer of peat moss.” Sounds sensible to us! 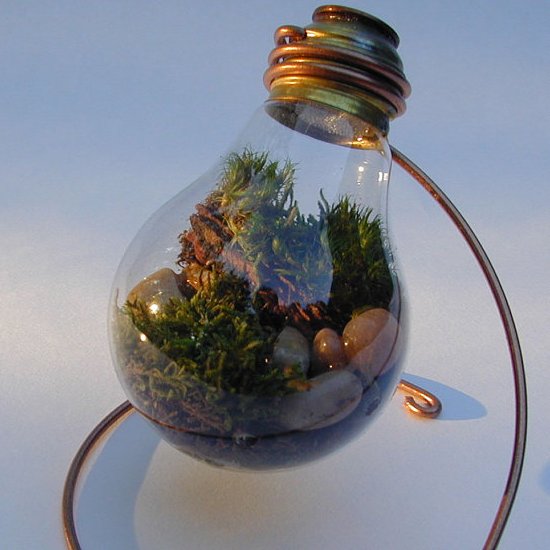 Graphic designer Tim Witteveen of the Michigan-based Steamed Glass Studio uses a balanced mix of mosses, river stones, lichens and bark, among other materials, for his tiered landscapes inside clear glass bulbs — in this case an old 25W one. Witteveen explains: “The living dioramas I create are designed to represent a scenic sampling of our natural world” — a miniature tribute to nature, so to speak. 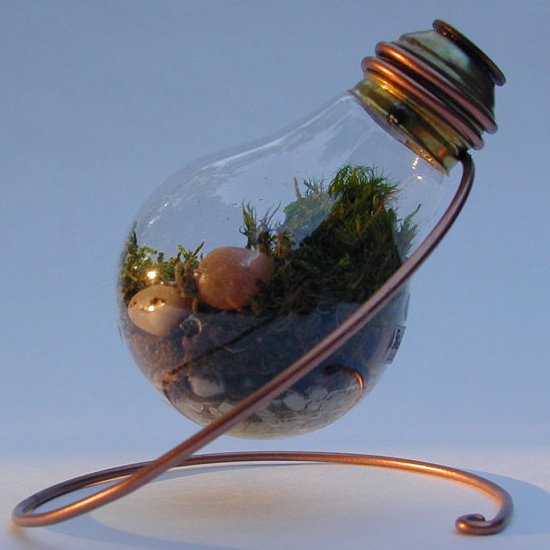 This tiny terrarium doesn’t need much to survive: some indirect light in a sunny room or a fluorescent light and a couple of drops of distilled or bottled water each month is enough — making it the ideal office miniature green oasis. And for that green-fingered experience, each terrarium comes with a small gardening tool. We love it! 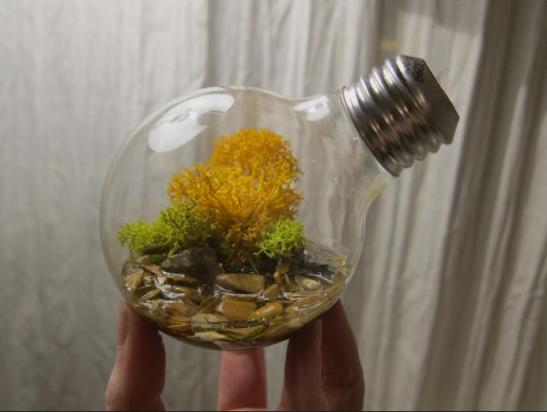 San Francisco-based artist Juliette Melton creates entire landscapes inside light bulbs that she calls “Tiny Terras.” Whether it’s a jungle, forest or even an Arctic environment you’re after, Melton can make it happen inside an old light bulb. 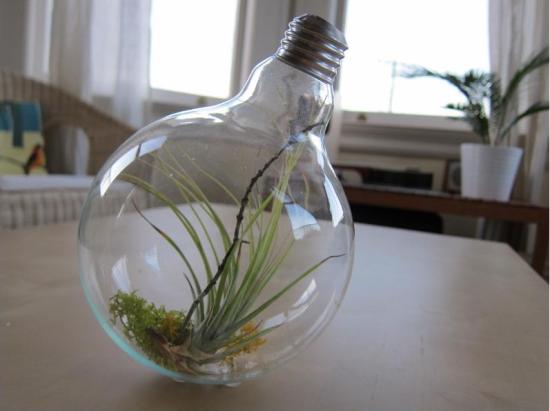 Little artworks in themselves, Melton’s Tiny Terra landscapes brighten up any space, and we reckon they’re just perfect for the office, home or to be given as a gift. 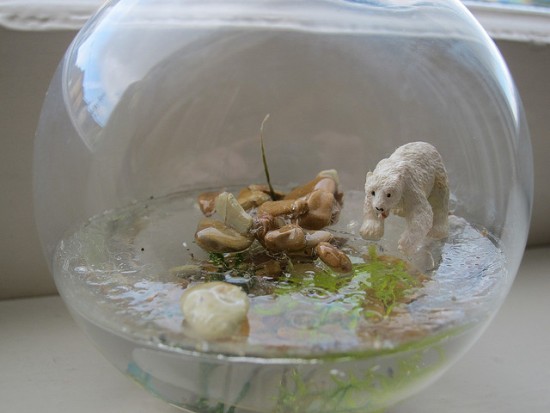 This polar bear isn’t standing in water but rather on “ice” — actually polyester casting resin intended for miniature train terrains that worked beautifully here, as we can see. Melton’s other staple materials include moss and tillandsia plants. Rocks also feature prominently in her designs and, like moss, won’t cost the earth. 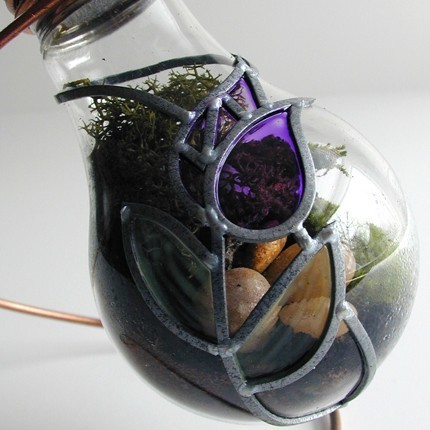 Also from the Steamed Glass Workshop (see entry 5) comes this purple and silver stained glass terrarium, which used to be an ordinary 60W light bulb. It’s almost hard to believe! 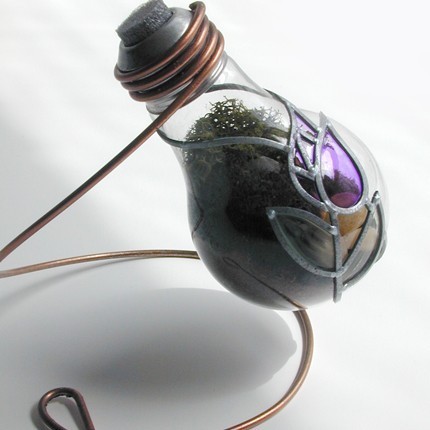 The elegant stand is a repurposed copper-colored wire hanger, and the light bulb, well, we think you get the idea… 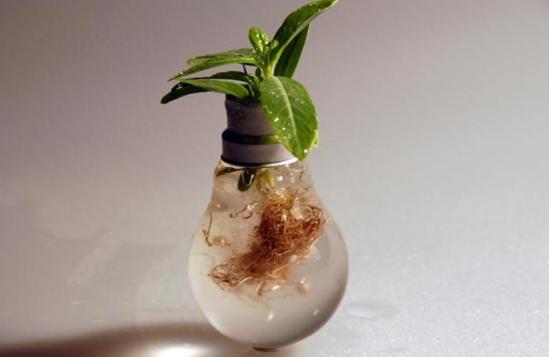 Instead of using the bulb to house the plant, designer Richard Neville uses old light bulbs as planters just as one would any conventional plant pot. The planters pictured here (and top) are filled with a clear growing gel, so that you can watch the roots while they are growing. Cool, huh? 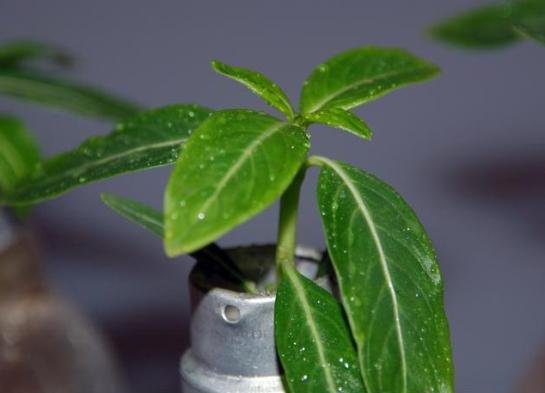 As you can see in the picture above this one, the plants rest on a tiny metal ring to keep them from toppling over. Neville says, “[They] make the perfect gift for anyone and any place, from kids to grandparents, from offices to dorm rooms.” Couldn’t agree more! 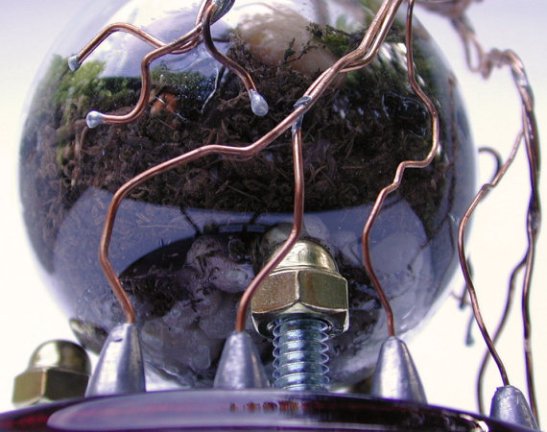 Using screws, nuts, bolts and some cleverly bent copper wire (which might either represent lightning outside the bulb or roots connecting to the stylized tree branch holding it) this steampunk-style light bulb terrarium blew us away. Almost literally, too, as it comes with a few extra nifty features… 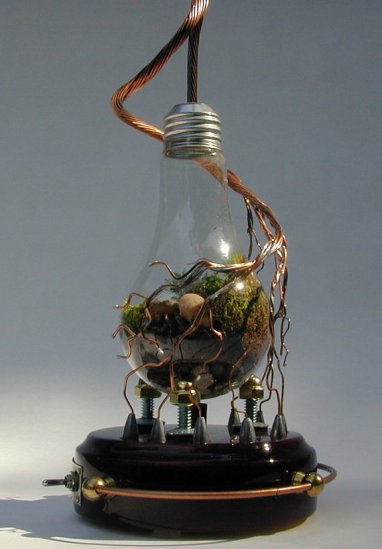 Designer Tim Witteveen explains: “With a flick of a switch, one of the small rocks in the landscape mysteriously glows — evidence of an idea about to hatch.” Now all you have to do is wait for the “aha!” effect. It’s certainly another inspired example of creative reuse.

Photographer John Kittelsrud first planted some mint in his old light bulb and then played around with the planter to achieve the 3-D effect visible in this image: “I shifted my weight to the other side and snapped the photo to get the other view,” he says. Simply cross your eyes to fuse the images. 3-D glasses may also work. 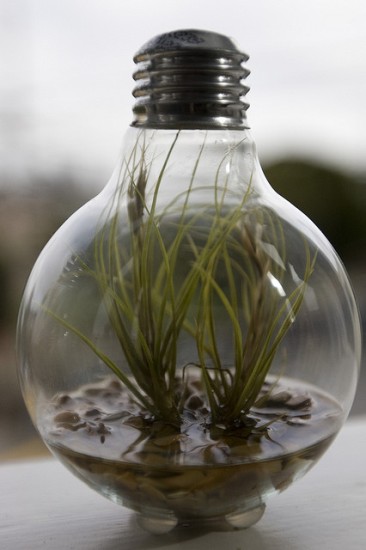 Like tiny crystal balls, these light bulb terrariums tell of worlds of wonder yet to be fully explored. We strongly agree with the closing words from Witteveen: “A well-designed terrarium will stir your imagination and could transport you into a daydream. Look very closely and you may see yourself as a child exploring the landscape within.” Happy bulb gazing, and vase and terrarium making — because we’re sure you’re now going to start saving your kaput light bulbs to create your own!