Mexico City’s recycling rate has quadrupled in the past year, thanks to the “Mercado de Trueque” recycling incentive program.

Day in and day out, Mexico City’s 20-million-plus residents generate 12,600 tons of waste. Until recently, a scant 15% of the 40 million tons of cast-aside material was actually recycled. Considering the fact that the Bordo Poniente — their 975-acre, 76-million-ton, several-decades-old garbage-packed landfill (famed as being one of the largest in the world) — closed at the end of last year, it is no wonder why Mexico’s capital has been bracing itself for a waste landslide. When vast disposal facilities reach maximum capacity and are either shut down or are otherwise inoperable, crisis is inevitable. No one wants trash to accumulate on the streets (as has been the case in Hong Kong and Naples, Italy, among many other global cities) — the visual disarray is almost as bad as the olfactory assault and the potential for disease to spread. 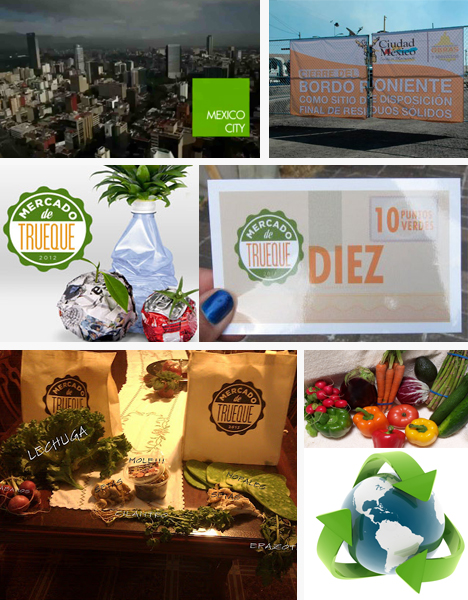 Remarkably, Mexico City has turned lemons into lemonade. Intent on shaking its unflattering, pollution-driven “Mexsicko” moniker, the government has converted the city’s now-closed dump, which previously emitted 2 million tons of CO2 into the atmosphere annually, into an organic waste-composting plant and biogas reclamation center. The metropolis has taken other sustainable measures as well, including the daily incineration of 3,000 tons of Bordo Poniente waste (which is now being used to power cement kilns), the installation of conveniently accessible neighborhood recycling collection containers, widespread citizen access to a free bicycle loan program called EcoBici, and the proliferation of eye-catching, pollution-absorbing vertical gardens. Mexico City’s once paltry 15% recycling rate has now soared to 60% in the past year alone, and through the implementation of an innovative new free food for recycled materials program called Mercado de Trueque, that figure could very well escalate even higher. Offering residents “real world” evidence that there is great value in keeping various post-consumer materials out of the waste stream, the main hope is that a greener mindset will become the norm.  Mercado de Trueque specifics: Just what type of potential does this eco-model have for long-term adoption? Based on the inaugural kickoff, which yielded 11 tons of recyclable materials (5.5 tons of cardboard/paper, 3 tons of glass, 1.5 tons of PET plastic, 1,407 pounds of Tetra Pak containers and 509 pounds of aluminum) from 3,000+ attendees, all of whom received a collective 3.5 tons of free agricultural goods, it seems to have been received quite well. As we’ve seen in the past, hyper-consumerism (while a typical symptom of our “love it today, trash it tomorrow” culture) is a condition that responds positively to constructive educational programs. Sweeten the deal with a little “thank you for your eco-stewardship” bonus (think Givmo, Recyclebank, etc.) and before long, people will be more than happy to divert cans and glass bottles from their conventional waste stream without batting an eyelash.