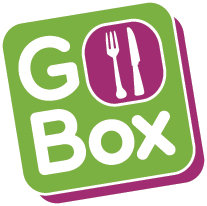 Like many Portlanders, Laura Weiss loves eating at food carts. The Oregon city boasts between 600 and 700 of the tiny eating establishments, far more than most cities of its size. What Weiss does not love is the amount of waste generated by all those to-go boxes. In downtown Portland alone, she says, food carts go through up to 60,000 disposable containers every month. Many vendors have switched to compostable dishware in recent years, but most of those products end up in landfills, where they will not break down to anything useful. The rest of the containers are plastic or Styrofoam. Weiss tried bringing her own reusable dishes when she visited food carts, but vendors were hesitant to use them for fear of running into problems with the health department, which has very strict regulations about how food can be packaged. Convinced there was a solution to this problem, Weiss kept digging. Eventually, she founded GO Box, a Portland-based business that provides clean, reusable containers to food cart customers. Consumers pay an annual fee of $12 to get a BPA-free plastic GO Box, which they can pick up at one of nearly 50 participating vendors. Once they are done with the box, customers leave it at a drop site and receive a token that they can use to get a GO Box the next time they eat out. There are five public drop sites around downtown Portland. Businesses can also pay to have a drop box in their office or building, making it even more convenient for employees to return containers. At press time, more than a dozen companies have signed up for the corporate program. Weiss makes regular trips to the boxes to pick up dirty containers, which she cleans and sanitizes in a certified commercial kitchen. Then she returns the boxes to the vendors for reuse. She travels exclusively by bicycle, and the boxes and bamboo bags she uses to collect her containers are locally crafted from sustainable materials. More than 1,000 individuals have subscribed to the service since it launched in July 2011. Consumers love it because it helps them eliminate around 1,200 to-go boxes every month. Vendors love it because the cost of using GO Box is actually lower than purchasing disposable containers. The program has been such a success that it has expanded beyond food carts into small cafés and even a local Whole Foods Market. Weiss’ future plans include expanding the program beyond downtown Portland into other parts of the city and out into the world. She receives plenty of inquiries from other cities looking to do the same thing, and says she is exploring licensing opportunities. Perhaps GO Box will make an appearance in a city near you sometime soon. Those interested in learning about GO Box licensing can contact Weiss at 971.212.9870 or info@goboxpdx.com.