How to Recycle Antifreeze

Antifreeze is a hazardous material, but local recycling facilities can safely collect and recycle it to prevent personal and environmental harm.

Antifreeze looks a little bit like Kool-Aid as it enters a car engine. But the liquid, which comes in colors ranging from cherry red to lime green, is nothing you would want to put on a picnic table. Antifreeze is a hazardous material that can cause serious harm to humans, animals and waterways. That is why those who replace their own antifreeze should resist the urge to dump it down the drain or in a nearby storm sewer. Every county in the U.S. should have at least one place that can safely recycle antifreeze. 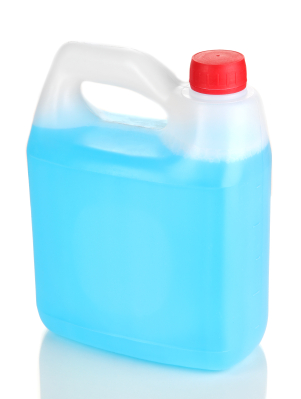 To make antifreeze, manufacturers add chemicals to a liquid base (usually water) to both lower its freezing point and raise its boiling point. Manufacturers also add a small dose of chemicals to prevent corrosion and foaming and balance the liquid’s pH level. Antifreeze goes in cars, trucks and other vehicles to keep the liquid in the engine block from freezing and causing damage, but it is also used in refrigerators, HVAC units and solar water heaters. According to the U.S. Environmental Protection Agency (EPA), the main ingredient in automotive antifreeze is ethylene glycol, a petroleum product derived from natural gas. Ethylene glycol is also used to make polyester fibers and PET plastic, to de-ice airplanes, and in the mining industry to keep chunks of coal from sticking together. A poisonous substance, ethylene glycol is particularly dangerous because it has a sweet taste, which can potentially lead children and animals to consume it in large enough quantities to be deadly. It doesn’t take much: as little as one-half of a teaspoon per pound of body weight can poison a dog. In December 2012, U.S. antifreeze manufacturers agreed to add a bitter flavoring component to their products to discourage children from consuming it if they come in contact with it. Some manufacturers make antifreeze with propylene glycol, a food-grade product used in cigarettes and electronic cigarettes. Given that it is less toxic, it is the main ingredient in antifreeze for watercrafts. However, it is important to recycle antifreeze no matter the contents. As the liquid passes through the engine block, it picks up heavy metals such as lead and cadmium. This adds to antifreeze’s toxicity and is another reason it is treated as hazardous waste by most states.

In a word: yes. The American Society for Testing and Materials and the Society of Automotive Engineers have done repeated studies on recycled antifreeze and determined it performs just as well as the new product. In fact, the EPA posits that secondhand antifreeze is actually better because the recycling process removes chloride often found in new antifreeze.

How is antifreeze recycled?

Most recycled antifreeze is put back to use treatment as antifreeze. Automotive shops can recycle it on site using specialized machinery. The machines remove the heavy metals and any oil that has made its way into the liquid, and then add chemicals to keep the ethylene glycol from breaking down. There are several different processes for doing this. Vacuum distillation, as described by Finish Thompson, uses a vacuum to draw antifreeze into a drum. The contents are boiled to remove the water, which is cleaned through a heat exchanger, then brought to an even higher temperature to vaporize and clean the ethylene glycol. Ion exchange resins are tiny plastics beads that are introduced into used antifreeze. Positively charged ions attract the “bad” materials and separate them out, returning the antifreeze to a cleaner, usable product. Reverse osmosis is a similar process, but uses a semipermeable membrane rather than resin beads to separate out the different bad components. All these processes leave behind a hazardous byproduct. EET Corporation, based in Tennessee, claims to have developed a process to recycle antifreeze in a cost-effective manner with no harmful leftovers. According to EET’s website, it uses “a combination of electro-physicochemical methods” to return the product to a level of quality equal to or higher that brand-new antifreeze. Companies that choose not to invest in recycling equipment can have their antifreeze picked up by recycling contractors such as On-Site Antifreeze Recycling in Florida or Recycling Fluid Technologies in Michigan. Many other pick-up options exist across the country. Another option for companies is to switch to extended-life antifreeze, which lasts for 150,000 miles rather than the standard 30,000 miles. Not only can it save business owners money on maintenance costs, but it also yields a smaller quantity of antifreeze for disposal. For the average car enthusiast replacing his or her own antifreeze, the local solid waste department is the most likely destination for disposing of the old product. Check with your local solid waste authority to determine the protocol for disposing of hazardous waste. All of them will remind you that it is very important to keep antifreeze in its own container (not mixed with other hazardous wastes), label it and transport it carefully so it does not tip over and spill in the car. If you have an empty container that once contained antifreeze (or other hazardous wastes), please consult with your local solid waste department for the safest disposal solution. If you are lucky enough to live in the Seattle area, you can even take your antifreeze to the Wastemobile, a hazardous-waste collection vehicle that travels to different areas of King County, WA, to pick up waste from individuals. To find an antifreeze drop-off location near you, use our recycling location finder.