How to Recycle Floppy Disks

Though floppy disks are long obsolete, many of them are still lying around. Here’s how to transfer your information and safely recycle them. 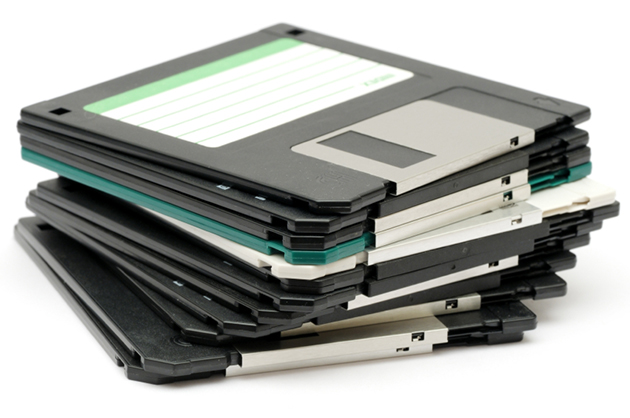 Experts say there are millions of computers sitting in people’s closets waiting for disposal. If that computer is more than 20 years old, chances are there is a box of floppy disks sitting right beside it. It might be hard to believe now, but the 5¼-inch floppy disk, then the 3½-inch disk, was once the pinnacle of data storage. With the invention of better devices that could store more data, such as CDs and flash drives, floppy disks were added to the long list of obsolete electronics. While a few creative minds have put them to use in craft projects, no one uses them for file storage anymore. So, unless you are prepared to sew yourself a floppy disk tote bag, the only thing to do with them is send them to a qualified recycler.

What is a floppy disk made of?

A 5 ¼-inch floppy disk is made with an inner layer of Mylar plastic, a type of PET, coated with iron oxide. (The same type of plastic is used to make the ribbon used in cassette and VHS tapes). The iron allows the 0s and 1s that make up computer data to be magnetically imprinted and retrieved. The plastic is cut into a disk so it can spin around and retrieve bits of data stored in concentric rings (similar to a vinyl record). The disk is put inside a protective covering, also made with plastic, to keep it safe from harm. The covering is typically lined with a lightweight fabric designed to remove dust particles. A 3 ½-inch disk is a little different. The device has a metal piece in the center, called a hub, which holds the disk in place while it spins. There is also a metal tab called a shutter than moves to the side once it is in a computer to give the machine access to the data. The outside of the disk is made with rigid, not soft, plastic. The disk on the inside is the same Mylar plastic. Although magnetic storage dates back to the beginning of the 20th century, it was first used for storing computer files in the 1970s.

How to recycle floppy disks

If you have information on floppy disks you want to keep, there are a couple ways to transfer it. One is to purchase an external floppy disk drive. Many major electronics retailers carry the devices, which come equipped with a USB port so you can plug it into your computer. Another option is to find a company that offers floppy disk transfer services. Typically, you send them the old floppies and they move everything to a CD. Once you have all of the information transferred from the disks, consider erasing or destroying them. Keeping your information private in the digital age is extremely important, and if those disks contain sensitive personal details or proprietary information about your business, why risk it? It is easy to destroy data saved on a floppy disk (which was always one of the downsides of the technology). There are free programs available for download that will let you reformat the disks. You can also take them apart and cut the Mylar disks into small pieces.

Now that your disks are free of important data, they are ready for recycling. There are several companies that specialize in recycling floppy disks. One is Green Disk, located outside of Seattle. While the company does not describe its process for recycling floppy disks, it notes that CDs and DVDs are shredded and sold to EPA-certified recyclers for reprocessing. Green Disk takes care to keep the different types of plastic separate, which is vital if it is going to be reused. It seems safe to assume floppy disks, which are also made of plastic, go through a similar process. Green Disk also accepts other hard-to-recycle technology items such as jump drives, cell phones, pagers, PDAs, portable cassette players, beta tapes, camera film and rechargeable batteries. There is a small charge for the company’s recycling services, but you can ship up to 25 pounds of material for the same price, so it may be a good idea to chuck other items in the box with your floppy disks. Institutions can invest in Green Disk’s collection bins if they plan on collecting a large quantity of material. Floppydisk.com, based in California, is another example of a company that accepts floppy disks for recycling. The online company takes disks in small to large quantities. All you have to do is pop them in the mail and pay for the cost of postage, and the company will take care of them. There is no charge for its services; in fact, Floppydisk.com is sometimes willing to buy large lots of disks, and if you send more than 200 disks, it will reimburse you for the cost of shipping (as long as you include the necessary reimbursement form). The website does not provide details about how materials are recycled.