How to Recycle DVDs and DVD Cases

With the waning popularity of DVDs, you may be looking to recycle your collection. Read on to ensure your discs and their cases are recycled properly. 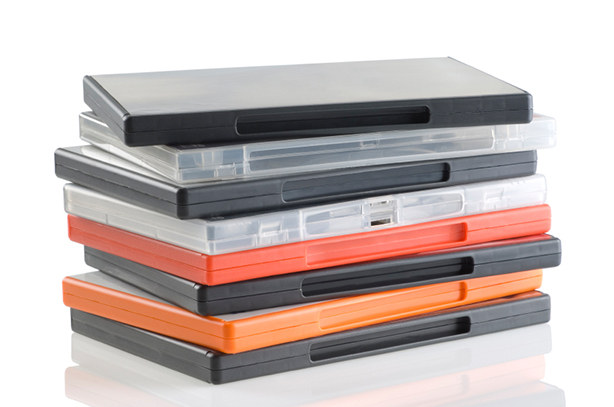 Owning DVDs used to be the best way to watch movies at home. Now, with online streaming services like Netflix and Hulu, it is hard to justify a towering display of DVDs in your living room. If you are preparing to dispose of DVDs and their cases, you have probably discovered that recycling locations are few and far between. Most curbside programs will not recycle them. Many community recycling centers will not touch them. So, what is the eco-friendly consumer to do?

What are DVDs and DVD cases made of?

DVDs are made of a specialized material called polycarbonate plastic, which is classified as a #7 plastic (the catch-all for “other” types of plastic). It is recyclable if manufacturers can get it in large quantities. Some DVDs contain trace amounts of aluminum and gold, both of which are highly recyclable. DVD cases (which may be called jewel cases if they contained discs intended for data storage) are easier candidates for recycling. They are made of #6 plastic, also known as polystyrene, or PS. It is the same stuff Styrofoam is made from (although Styrofoam is the expanded type and has its own recycling woes; see “How to Recycle Packing Peanuts” for more details). Polystyrene can be melted down and turned back into toys, smoke detector cases, kitchenware and a number of other consumer products.

Why is it important to recycle DVDs and DVD cases?

Since DVDs and their cases are made of plastic they will not biodegrade over time. If they find their way into incinerators they will release toxic chemicals, including hydrochloric acid, sulfur dioxide and dioxins. Polycarbonate plastic is thought to be especially detrimental to human health because it contains bisphenol-a, or BPA, which has been shown to cause abnormal brain development and affect reproductive organs. In addition, movies are not the only things that are on DVDs. Many people also have a stack of DVDs used for data storage. If those DVDs contained personal or sensitive business information, it is important to make sure those discs are destroyed. Scratching the disc will deter some people from trying to download your information, but if someone wants it badly enough, there are programs to help them recover it.

How to recycle DVDs and DVD cases

Most DVDs have a piece of paper inserted behind a protective cover on the outside of the case. Some cases have liner notes as well. This is the easiest part of a DVD to recycle, as you can simply slip that paper out and put it in your recycling container. There are a few communities that accept DVDs and their cases at the curb, including Sandy, UT, and Lincoln, NE. However, you are more likely to find DVD recycling at your community’s recycling center. Waukesha, WI, and Raleigh, NC, are two examples of communities that offer DVD recycling programs at their recycling centers. Another option for recycling DVDs is to get them to a dedicated DVD recycler, such as the CD Recycling Center of America. This recycler accepts products from individuals, businesses and institutions such as schools. There is no charge for its services other than the cost of postage. Check the CDRCA’s website for packing instructions and its mailing address. If you are disposing of DVDs used for data storage, make sure you send them to a company that guarantees destruction of the discs and any data stored on them. The CDRCA provides this service, as do many other businesses that recycle DVDs.

Can DVDs be reused?

Remember that crack at the beginning of this article about towers of DVDs being hard to justify? The truth is plenty of people still want DVDs. They take them to their vacation homes. They watch them in areas lacking dependable Internet access. They collect them and hang onto them as keepsakes. If you have DVDs that are still in good condition, you may be able to sell them online at a site like SecondSpin.com. Your community may have a store that specializes in secondhand media like DVDs, CDs and video games. Or, if nothing else, you may be able to donate them to charity. Artists and DIYers have come up with plenty of ways to use old DVDs. Spanish artist Daniel Canogar used 360 old DVDs to create an interesting installation in Sweden’s Bildmuseet in 2013. He placed the DVDs on the wall then projected movies on them. The light bounced off the shiny surface on the discs and “create(d) a swimming pool-like effect” in the room, according to one blogger. In addition, Canogar mixed the music from the movies to create his own soundtrack to accompany the exhibit. Most craft projects involve grabbing a pair of scissors and cutting DVDs into smaller pieces. Those pieces can adorn candle holders, jewelry, picture frames, mirrors or even homemade disco balls. The sparkly bits of plastic create can’t-miss items that are certain to catch every visitor’s eye.