How to Recycle Propane Tanks

Propane tanks present a real danger in the waste stream, so it is essential to properly dispose of old tanks so they do not injure you or sanitation workers.

Summer is fast approaching, and that means it is time to scrub down the barbecue and pull the camping gear out of the garage. As you do that, you are probably eying at least one propane tank and wondering if it still holds any gas. Hopefully, if the answer is no, you are wondering how to recycle it. Propane tanks present a real danger in the waste stream because they can cause fires or even explosions. It is essential to properly dispose of old propane tanks so they do not injure you or sanitation workers.

What is a propane tank? 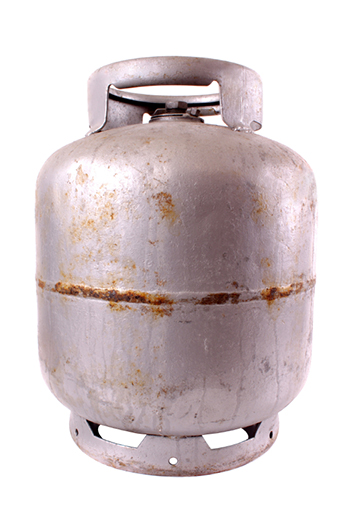 Propane tanks come in several different forms. The most common are 16.4-ounce green containers intended for camp stoves and other small equipment, and the 5-pound steel tanks for items like barbecues and outdoor fireplaces. Commercial outfits can purchase larger tanks to power their operations or store propane for sale. Propane itself is a form of liquefied petroleum gas, meaning it turns into a liquid when put under pressure. It is considered a clean-burning fuel that does not produce carbon dioxide or other emissions that contribute to climate change. It is also nontoxic and will not have a long-term effect on plants and animals if it is spilled on the ground. Like natural gas, manufacturers add a “rotten egg” or sulfur-like smell to the product so it is easily detectable when a container is leaking. Propane tanks are never filled to the brim because the gas expands as it heats up. At most, a 5-gallon tank will contain about 4 gallons of propane. As of 2002, propane tanks must be equipped with an overfilling prevention device to prevent them from being filled more than 80%. Establishments that refill tanks will not touch equipment without this device. It is possible to have an OPD installed on an old tank, but in most cases it makes more sense to purchase a new one that has an OPD already in place.

Why should I recycle a propane tank?

A 5-gallon propane tank is easy to recycle. The body is steel and the valve is copper. Both of these are valuable products with ready markets. The hard thing is ensuring all the propane is out of the tank. Most consumers will not use every last wisp of propane, and the leftover gas can cause a fire or explosion. Due to this risk, it is extremely important not to place propane tanks in the trash unless you are absolutely certain they are empty. They can cause serious injury or even death if put in compactor trucks, incinerators and other waste management equipment. In addition, you should not open a tank and let the propane leak into the air. If someone nearby is smoking a cigarette or has another incendiary device, and you do not notice, any leaking propane could cause a fire.

How to recycle a propane tank

It is important to leave an unwanted propane tank in its original form. Put caps back on small bottles and do not attempt to remove the valve from large tanks. Store the containers upright, outdoors and in a place where they are unlikely to be tampered with. The 16.4-ounce propane tanks cannot be reused, so takeback programs are hard to find. Coleman used to sell a product called a Green Key with their bottles, which individuals could use to ensure the propane tank was completely empty. However, the program was discontinued because many recycling centers still refused to accept the tanks. Coleman now provides instructions for burning off all the fuel in propane tanks, which makes them safer to throw in the trash (check out page 2 of this PDF document for more information). If buying and throwing away all those small propane tanks bothers you, it might be worth looking into camp stoves that use alternative fuels, such as high-efficiency wood-burning stoves. They do not always burn as hot, but depending on how you plan to use the stove that might not matter. Many retailers, including AmeriGas and Blue Rhino, will take back 5-pound steel propane tanks, usually at no charge. You should be able to return your tank to the point of purchase or to another local dealer. Whenever possible, propane tank manufacturers like Blue Rhino will put tanks back to use by painting them and swapping out nonworking or outdated parts. Any tanks that cannot be reused are taken apart by professionals and recycled. Blue Rhino is also able to siphon any remaining gas from the propane tanks and put it back to use. Your other option for recycling is to find out how your local solid waste district deals with propane tanks. On the Hawaiian island of Kauai, residents can take propane tanks to any recycling center. Residents of Vancouver, WA, and Tucson, AZ, must take their old propane tanks to facilities that include household hazardous waste centers.

One brave soul makes art from an old propane tank

Colin Selig, an artist based in Walnut Creek, CA, makes chairs and benches by cutting up old propane tanks and welding them together. “I was intrigued by the design challenge and ecological statement involved in taking this ubiquitous, utilitarian container out of the waste stream and transforming it into an object more sensuous in form and sophisticated in function,” Selig says on his website. Some of his flowing, futuristic pieces retain the red symbol denoting that the metal used to hold a flammable material. Disclaimer: Of course, leave the cutting and welding of old propane tanks to the professionals. Instead, find a nearby recycling location for your spent tanks here.