GO Box: Curbing Takeout Waste in Portland and Beyond

GO Box has reused more than 50,000 takeout containers in Portland, with its sights on expansion into new markets.

Three years ago, Laura Weiss launched GO Box with a simple goal in mind: Combatting all the packaging waste generated by Portland’s red-hot food cart scene. Weiss’ solution to the issue is an incredibly durable, reusable plastic to-go box designed to travel from food cart to consumer to washing station and back through the cycle again and again. Oh, and to ensure the organization’s footprint is as small as possible, it is done entirely emission-free by bicycle. In talking with Weiss, it’s easy to see that the business is a labor of eco-love. The challenges that any small business faces are there — limited resources, long hours and a winding path of logistical issues to handle around the clock. But it makes no difference to Weiss. To her, this is all about conserving via reuse whenever possible. Some 1,200 GO Boxes are in circulation around Portland today, serving approximately 2,000 subscribers at 75 or so vendors in the city. For a mere $18 per year subscribers are provided a convenient, earth-friendly alternative to the typical single-use takeout container. They receive the container from the vendor of their choice, enjoy their food and then drop the container at one of GO Box’s public or private pick-up sites around the city. Logistically, GO Box operates in Portland’s downtown core, targeting the numerous food cart “pods,” or clusters of carts usually found on surface parking lots, as well as brick-and-mortar takeout establishments located within a close radius. The setup for the entire program is not only dependent upon the scale of the central business district, but also the businesses within. Delivery and pick-up locales are grouped tightly together, and the three rinsing locations — kitchens in downtown Portland that perform the cleanup —offer convenience as well. Every pick-up and delivery is carefully tracked. At any given time, a steady flow of boxes are with vendors, while others are out for delivery, collected in drop boxes or are being transported to and from rinsing locations. Just this summer, GO Box announced it has saved and processed 50,000 containers. 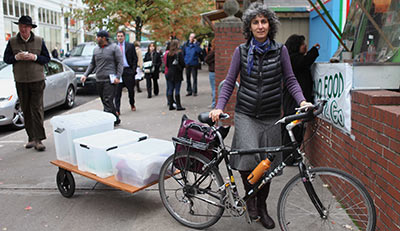 From Weiss’ perspective, expanding the program across the city is a great opportunity, but she stresses the need for it to be done right, with the smallest footprint possible. Even as GO Box has grown to new heights with more vendors and exposure, Weiss and a few assistants are still responsible to transport the containers via bike back and forth. In Portland, expansion likely means heading across the Willamette River to the city’s east side, which poses quite a challenge. “Unfortunately, it just doesn’t make sense to go beyond downtown at this point,” Weiss says. “But maybe someday. We still have a lot of expanding to do in downtown. I still think there are thousands more people who could be GO Box subscribers. “If you work in downtown Portland, you’ve at least seen the logo,” she says, before adding that the next step is fostering that familiarity and turning it into a wider net of vendors and a larger subscriber base. Weiss sees future growth opportunities with the central business district’s takeout restaurants as well. She mentions that she has had several discussions about this type of expansion recently. Just north of downtown proper, the Whole Foods Market in the Pearl District has realized the environmental benefits of using GO Box and offers it as an alternative to its typical paper-based takeout packaging. The store’s location, surrounded by apartments and office buildings, ensures a steady stream of grab-and-go customers — the perfect fit for GO Box. On the horizon, a countywide change goes into effect next March, when Portland begins banning “compostable” packaging and cutlery from businesses’ compost bins. The change is necessary due to the difficulty in properly breaking down these materials at local facilities, but it presents an enormous issue for businesses around the city. Weiss predicts that businesses currently trying to do the green thing will have to research better options moving forward. That’s where GO Box comes in — providing an environmentally friendly option when the ban goes into effect. “Dealing with any recycling or composting issue like that is hard,” Weiss admits. “Education and outreach will be key moving forward.” It’s important to learn about the boxes themselves as well. Houston-based G.E.T. manufactures the polypropylene (Plastic #5) containers, though Weiss would be interested in a similar package made from recycled materials if it becomes available on the marketplace. Still, it is a more sustainable option than the single-use alternatives. GET’s own analysis determined that the GO Box container is environmentally better than Styrofoam products after 25 to 30 uses. Weiss assures that each box in the system is used far more times than that. 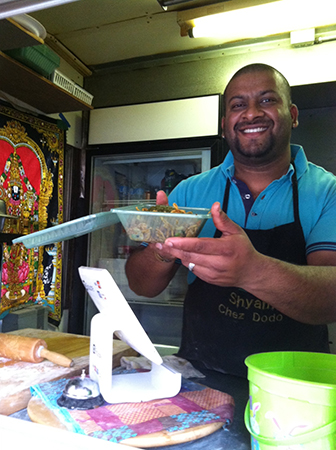 Beyond Portland’s city limits, Weiss has begun licensing the GO Box brand. The first new city to get a program up and running is Sacramento. Now, San Francisco is set to start testing out its new GO Box program as soon as this week, taking Portland’s proven model to its own urban core. Weiss admits that Portlanders’ willingness to try new things, including new food options and containers, has certainly helped make GO Box a success. “I’ve always said, if [something] can’t work in Portland, it can’t work anywhere,” Weiss says. “There’s something about the food cart culture here that, in the beginning, really helped.” Licensing in other cities will be cautious and calculated, but it is welcomed. When asked where she imagines GO Box landing successfully in the future, Weiss doesn’t hesitate to suggest Vancouver, BC, and Seattle as two desired markets. She also mentions New York City, Philadelphia and her former stomping grounds, Washington, DC, as potential destinations. What started as a Portland-based experiment might soon become commonplace amongst America’s top takeout towns. Only time will tell. For more information about GO Box, visit goboxpdx.com, or email Laura Weiss at laura@goboxpdx.com.