Making Your Own Dairy Products for Beginners

Making your own dairy products may sound like a daunting challenge. But it’s easier than you may realize – and is a sustainable alternative. 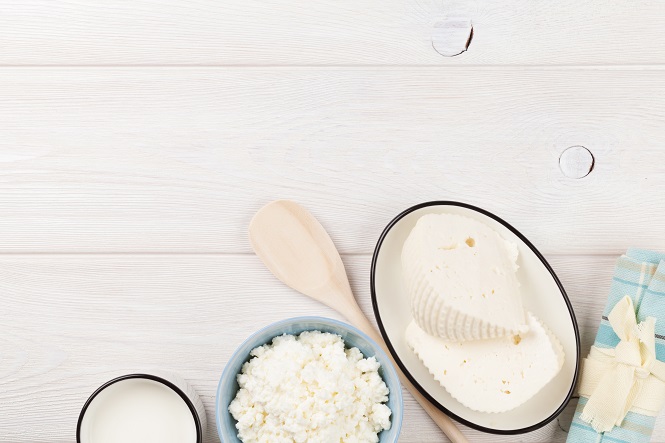 As far as hobbies go, making your own dairy products probably runs on the less-thought-of side. After all, yogurt is readily available at the store. But making your own dairy can be a fun addition to any green lifestyle, and it’s never been more important. The World Wildlife Fund states the dairy industry has a number of harsh environmental impacts. If dairy farms are not properly managed, ammonia emissions can damage habitats and air quality, runoff from dairy farms can pollute water supplies, overgrazing can cause desertification of land and creating a pasture out of forested area is what causes soil erosion. And dairy farming is a global industry, with 270 million estimated dairy cows in the world. You can take some of that stress on the Earth away by making your own dairy products right in the kitchen with organic milk, or even by homesteading a cow.

You’ll, of course, need milk as your base if you want to make homemade dairy products. Make sure that milk is sourced sustainably by buying organic grade milk, but you’ll still have to watch how it’s pasteurized. Natural News discussed the different types of milk in terms of pasteurization. Basically, you have raw milk that’s been unpasteurized (a process that involves heating the milk to kill bacteria and enzymes), Low Temperature Pasteurized Milk (heated at 145 degrees for 30 minutes), High Temperature Short Time (HTST) pasteurized milk (where the milk is heated to be 161 degrees for 15 to 20 seconds) and Ultra High Temperature (UHT) pasteurized milk (where milk is heated to at least 280 degrees for 1 to 2 seconds). UHT basically nukes the milk sterile, hurting its ability to be cultured for yogurt. Try to go for milk that is as pure, raw and unpasteurized as possible. Many states have made raw milk illegal, so depending on your sourcing options, you may want to cut right to the source and homestead a cow if you have the space, time and inclination.

It may sound extreme, but you’d be surprised how devoted people are to the idea of owning their own family cow. Yet it’s not for city dwellers. The Prairie Homestead recommends having two to five acres per cow. They can eat about 30-40 pounds of hay per day, to get milk from a cow you have to breed her and cows can produce about three to four gallons of milk per day when well cared for. You can find a helpful Q&A here, and there’s a good general article on the topic here.

If you can find a dairy product at the store, you can make it at home. Below are some basic recipes for some of the easier-to-make products.

To get started, you’ll want to try an easy cheese to make. Queso blanco fits the bill, with its simple process and mild flavor. Backwoods Home Magazine offered an easy recipe: “Heat one gallon of milk to about 185 or 190 degrees F, stirring frequently. When temperature is reached, remove from heat. Add one-quarter cup apple cider vinegar, a little at a time, until the curds separate from the whey. Pour the curds into cheesecloth, and let hang for an hour or two, until cheese is cool and solidified. Slice, cube, or crumble and use! This cheese is best used within a few days.”

Yogurt is pretty involved prep-wise. You’ll need to let it sit all day or overnight. But here’s one of the simplest methods on the web from blogger Trina Holden (head over there for other great resources on eating healthy and naturally): Heat milk in a large saucepan until it’s bubbling and there is a skin forming on the top. Pour that heated mixture into a glass jar(s); that is the jar your yogurt will be in once finished. Let cool until the milk is warm, but not scalding (or 115 degrees). This will probably take an hour or two, but faster if you put the jar in some cold water. Then add what is called a starter, which is some store bought plain yogurt or yogurt from your last batch. According to the site, you’ll need 2-3 tablespoons of yogurt per quart, or a half-cup per gallon. Stir the yogurt into the milk gently. Put the jar back into the pan, and fill the pan with the hottest water out of the tap. The water should reach the height of the yogurt. Leave for eight to 12 hours. Put the yogurt in the fridge to cool.

Here is one of the easiest dairy products you can possibly make at home. Backwoods Home Magazine gives a good version of this simple recipe: “Gently heat one quart whole cream, half and half, or whole milk to 86 degrees F. (On a warm summer day, I will simply set a quart Mason jar of cream in the sunlight until it is no longer cool to the touch). Add one packet of sour cream starter, and stir or shake well. Let sit at room temperature until the cream or milk has thickened; how long it takes will depend on the time of year, warmth of the room, and type of milk or cream used. It should take 24 hours or less. When the cream or milk has thickened, label, date, refrigerate and use.”

OffTheGrid News gives a good method for making your own butter at home: You’ll need an electric mixer, 2 cups of organic heavy cream and a half teaspoon of salt. Combine the cream and salt into the mixer, and mix at a speed of eight or nine. Run for 10 or 15 minutes. Solids should be on the side of the bowl. Remove the solids and squeeze into a ball. Squeeze the ball under some running cold water until the water runs clear to rid the mixture of the buttermilk. Removing the buttermilk keeps the butter fresh longer. Store in the refrigerator. Your butter should keep for a few weeks (hint: what you’re left with in the mixer is buttermilk. Keep it and use it in baking). With these simple methods, you’ll feel like an old fashioned dairy farmer in no time. You’ll have the satisfaction of making your own products out of basic milk and have a natural, sustainable addition to your diet.