How Atlanta is Improving Recycling

The Recycling Partnership is stepping it up again to connect corporate partners with local recycling challenges to achieve their overreaching goal to make recycling easier for people. This time it’s in Atlanta.

Recycling Today reports that the “Atlanta’s Office of Resilience and Department of Public Works has begun working with The Recycling Partnership, a national nonprofit that applies corporate partner funding to improve curbside recycling systems in cities and towns across the country, to improve recycling in the city through the ‘Feet on the Street’ public service and educational campaign.”

Feet on the Street

The “Feet on the Street” recycling education initiative is a pilot project that began on July 24th, 2017. The goal is to reduce the materials that are being put into Atlanta’s single stream curbside recycling bins that shouldn’t be in them. The plan is to educate the residents about what should and shouldn’t go in their recycling bins.

For eight weeks there will be a group of city employees (the “feet”) that will be inspecting recycling bins in four of Atlanta’s recycling routes (the “street”).

According to the press release from the City of Atlanta, “We’re focusing our pilot program on these four routes because although the residents in these communities actively recycle, their bins have high contamination rates,” said Michelle Wiseman, Director of Waste Diversion and Outreach with the Mayor’s Office of Resilience. “This program aims to resolve this issue by educating residents and as a result, should save taxpayer dollars.” 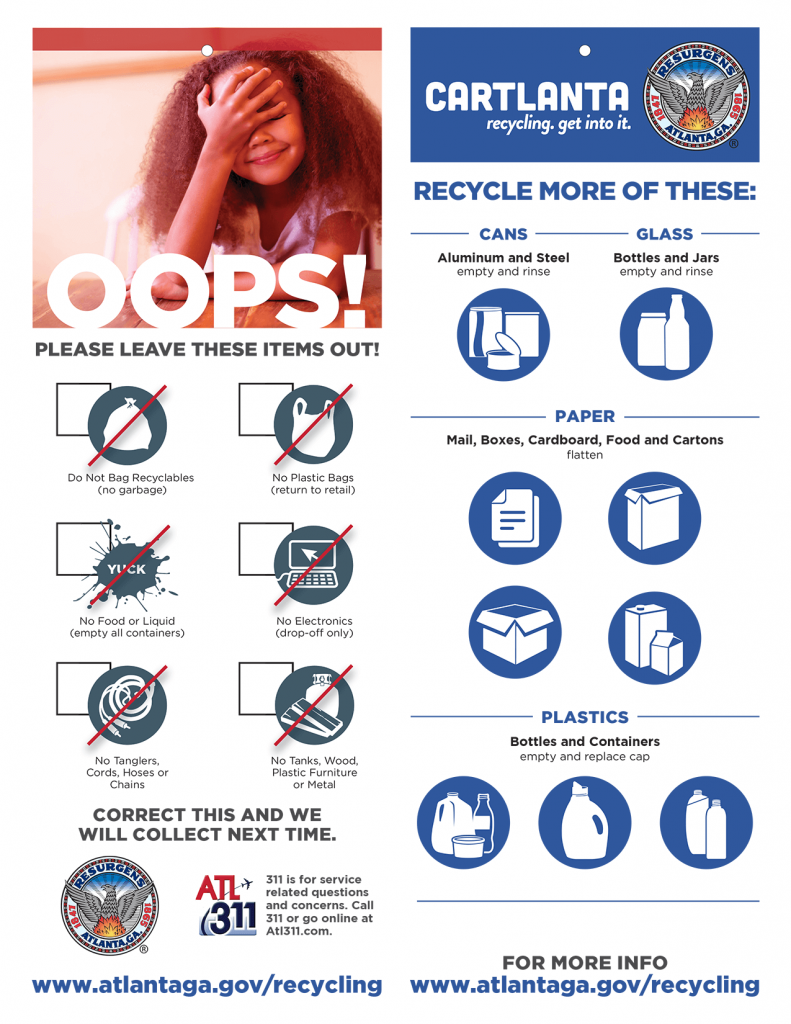 The “Feet on the Street” group will check the residents’ bins for materials that can’t be recycled. If unwanted materials are discovered, the group will advise the resident by putting an informational “Oops Tag” on the contaminated bin. The resident must then correct the problem before the recycling will be collected.

Then the “Feet on the Street” group will log the unwanted material using a smartphone app provided by Rubicon Global, a waste management company based in Atlanta. The data that is collected will be used for future campaigns aimed at educating the public about real world recycling issues.

“The City of Atlanta is working at the cutting edge of recycling, using specialized technology and smart collaborations to improve key aspects of service,” says Keefe Harrison, CEO of The Recycling Partnership. “We are proud to work with such a progressive partner, and applaud Atlanta for taking on this large issue that is affecting cities across the U.S.”

The mission of The Recycling Partnership is simply to make recycling easier for Americans. To this end, they connect public and private partnerships to bolster recycling at the local level. Their work “engages the full recycling supply chain: from local government to industry end markets, haulers, material recovery facilities, and converters.”

For more information about The Recycling Partnership, visit http://recyclingpartnership.org/. You can also find information about the report they co-authored with the Environmental Protections Agency, The 2016 State of Curbside Recycling, at https://recyclenation.com/2017/02/2016-state-of-curbside-recycling.