Never mind what they are made of — Further Products’ food waste-based soap and candle products take reuse to a new height.

Want a glimpse into the culinary leanings of the typical American citizen? Fat is where it’s at. Visiting practically any fast food joint dotting our landscape is the obvious choice for a crash course in battered and deep-fried eats, or simply just attend a state fair, where menu items such as spaghetti and meatballs, butter, Twinkies, bacon, Coca-Cola, pickles and cookie dough are deemed positively naked without a final dip in a crispy, cholesterol-clogging exterior.

In a country where McDonald’s serves up roughly 3 billion orders of French fries every year, one thing is certain: Food establishments from coast to coast have a seemingly endless supply of spent cooking grease. Rather than illicitly dumping the solidified goo, as was the case just a decade ago, it is now a mainstream practice to pour the remaining kitchen oil into on-site collection bins that “grease ninjas” such as Clean Earth and Capital Biofuel, among many others, then pick up at no cost (or even compensate restaurateurs for). 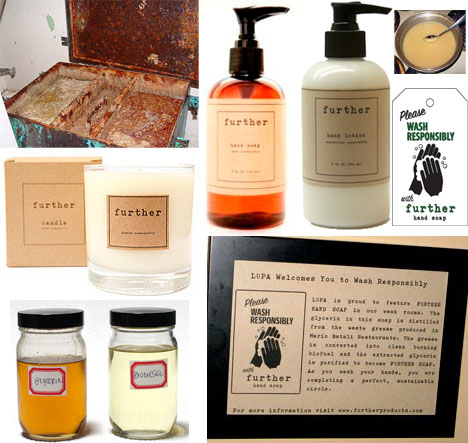 Processing companies then repurpose the slick material into a diverse array of post-consumer products, including biodiesel, as well as adhesive tape, animal feed, cosmetics (such as face powder), lubricants and household paint, making bank while helping the environment in the process. It may seem like a slimy business, but it is nevertheless a necessary one. When leftover oil and animal-based fats do not find their way into our gas tanks or into mainstream items, they are typically shipped off to rendering plants, where they are cooked down with various parts remaining from slaughter facilities into a protein-based material that is then used to augment and flavor animal feed. Once used kitchen grease is allowed to solidify, it can double as an effective lubricant to help gardening tools like pruners, scissors and shovels operate more effectively, plus it can also be safely composted in very small amounts. Fans of fine feathered friends may also like the idea of creating DIY suet cakes composed of fat mixed with assorted bird seed, nuts and other nibbles that — once allowed to dry thoroughly — can be hung on tree boughs for a nice eco-offering. Those who are really in tune with the green scene know that while biodiesel and bird treats generate lovely warm eco-fuzzies, transforming unwanted kitchen grease into candles and soap is kind of like conjuring up an alchemic miracle that also happens to smell impossibly dandy. And, guess which high-profile chef has been doing it for several years now? Mario Batali, or more specifically, Megan and Marshall Dostal from Further Products have been diligently converting all of the grease collected from his LA-based Mozza restaurant into a modest collection of liquid hand soap, lotion and candles augmented with essential oils. Before you turn your nose up at the idea of lathering your hands with soap that was formerly known as pig jowl or chicken abdomen grease, there are a few basic chemistry facts to consider. Once organic-based fat solids are processed, crude glycerol is generated, which, upon being further refined, is converted into a thick liquid called glycerin. This is the very same substance that has been used for ions to soften skin, create lotion/cosmetic bases and blow up random objects (um, that’s only when it’s transformed into its evil cousin, nitroglycerin). Basically, you’ve been using fat to cleanse and moisturize your body forever and probably didn’t even know it! Those who are still skittish about applying Further’s products to their bodies might instead prefer to light one of their 11-ounce candles instead — each $24 product is described as “fragrant and warm” while also capable of “freshen(ing) your conscience and inspir(ing) your soul.” All that in a block of purified animal fat? I’ll take a dozen! If you’re curious but not quite motivated to fully commit to a purchase, there are multiple restaurants throughout New York, California, Nevada, Colorado and North Carolina that feature Further’s product line in their bathrooms. Once you’re hooked, order one or many items from the online store or visit a whole host of U.S. retailers in person for your rendered fat fix. Either way, you’ll be offering Mother Nature a sustainable high five that will bestow your bod with squeaky clean artery liberation. Lather up!